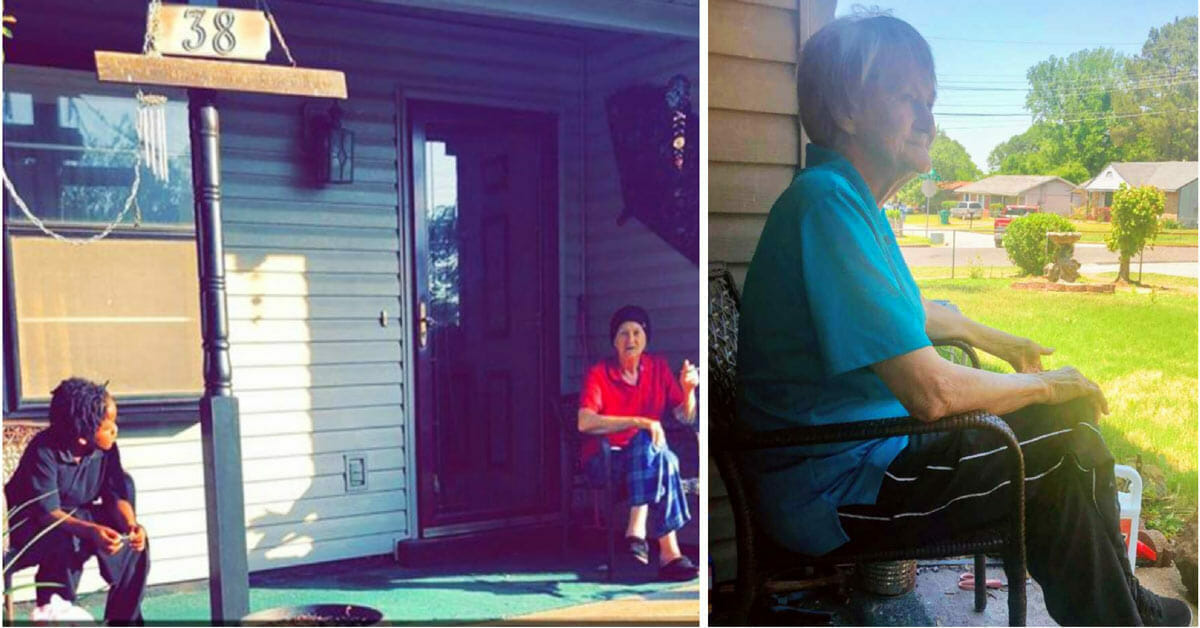 Darrien Middleton works in the emergency department at her local hospital. Though her job is incredibly tiresome, she enjoys making a difference in people’s lives.

In an ideal world, Darrien would also watch over her sick grandmother Wilma every second of the day, but of course an ideal world is far from a reality when you’re also holding down a full-time job.

Fortunately, it would seem that Wilma already has a guardian angel here on earth …

Two years ago, Darrien’s grandma received a shock message: She was suffering from lung cancer. She underwent surgery and had a lung removed in a bid to make her better again.

It should go without saying that it took a long time for Wilma to recover, and she was incredibly weak from the operation. Six months later, her nightmare manifested itself in the form of a different message from doctors: Wilma now had breast cancer.

For years, Darrien has tried to convince her grandma to move in with her, so that she might better care for her as she fights against the terrible disease. According to Darrien, however, her grandma is too stubborn to leave the home she has lived in for 38 years.

“She refuses to move in with me because she loves her independence and her home,” Darrien explains.

Darrien freely admits that not many people have good things to say regarding the area where Grandma Wilma lives – it’s in quite a sorry state.

However, it’s in exactly this neighborhood that a beam of hope shines through in such dark times. The friendliness present in Wilma’s neighborhood has truly been a blessing.

“I work full time in the emergency department in our hometown on night shift,” Darrien said. “That alone keeps my schedule very limited, along with being a full-time student. We don’t have much family here, so getting Nana back and forth to treatment every day and being able to check on her frequently (or as much as I would like) has been difficult for me to do. This is where her beautiful neighbors come into play.

“They check on her multiple times throughout the day and have even helped me get her to chemotherapy and radiation appointments. They are honestly what keeps Nana going. I can’t go over to her home without someone at some point yelling ‘Hey Ms. Wilma, How ya doing?’ She knows everyone by name and they know and love her just as much as I do.”

But there’s one neighbor in particular who lights up Wilma’s everyday life more than anyone else. 7-year-old Caleb.

Caleb lives with his grandmother, father and two brothers in the house next door to Wilma. She offers Caleb food when she has some spare, and has become something of a best friend to the boy.

Darrien explains how the boy has an “old man’s soul” that everyone loves. She decided to share his and Wilma’s story with the world.

Apparently, Caleb sits on Wilma’s porch with her and they talk for hours, covering all manner of subjects.

“My nana is so attached to him and the bond they have is incredible. He doesn’t come from much, but you can tell he has been raised on love. He will bust out a dance move in a heartbeat, will go on and on about how much he loves school, and make you laugh until you cry. This kid deserves the love he has received from this post. He stands out from the norm and brings so much joy into everyone’s life he is around.

“I am so thankful for him and the love he has shown my grandmother. I know for certain it has helped her on her hardest days. He will never know how much I truly appreciate him. I hope one day he realizes the impact he has left on her life and mine as well.”

Wilma will soon undergo another 30 rounds of radiation therapy. No matter what, she has her family, her kind neighbors and Caleb in her life.

In Jackson, Tennessee – on Wilma’s porch at least – age and gender does not matter. What matters is love.

The world needs to hear more positive stories like this one. Caleb probably has no idea of the amount of joy he gives to people.