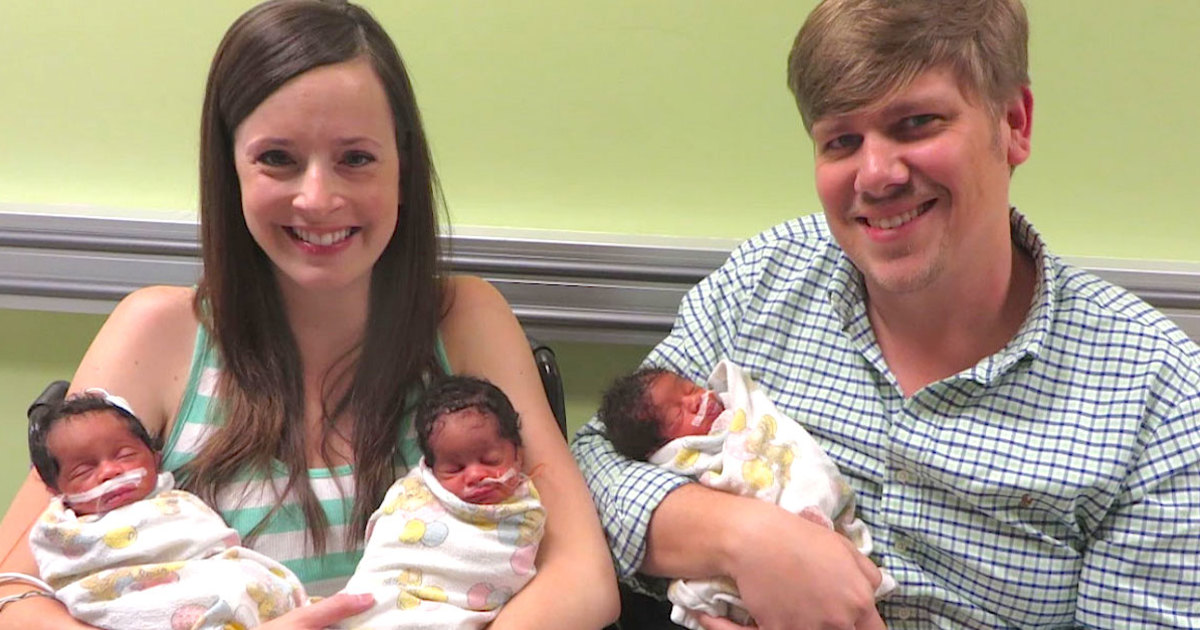 Even though the year is 2017, racism and prejudice continue to pollute our world.

Many people retain narrow-minded and over-simplistic views on what a family should “look like”.

Aaron and Rachel Halbert have experienced such prejudices up close – despite that they deserve loads of love and respect for several courageous decisions they took.

The Halberts first adopted two children – and then chose to take things a step further – after learning about embryo adoption.

The parents were determined to offer a home to more children who would otherwise not have a family – and decided not to forget those frozen embryos who seem to be forgotten.

And they certainly refused to let something as superficial as skin color get in the way. They visited an embryo donation bank and found a set of twins they decided to make their babies.

But if this weren’t amazing enough, their story soon took another unexpected turn.

Aaron and Rachel Halbert had long dreamed of becoming parents, but Rachel had a very hard time getting pregnant.

They instead opted to adopt two children, one boy and one girl.

But that decision would face some strong reactions – just because the kids were dark-skinned.

“We knew, especially in the South, that a white couple with non-white children would draw a myriad of different reactions. There will always be the older white woman in Walmart who stared at us with sheer disgust, or the African-American mother who looked at us and just shook her head,” Aaron told the Washington Post.

But Aaron and Rachel were very happy, and proud of their little family.

When the couple heard of embryo options,they decided it could be a good idea.

Rachel implanted two African American embryos, which have been frozen for over 15 years.

The new babies would therefore “match” their already existing siblings.

“They agreed with our thoughts about our kids matching each other racially and were supportive of the decision to select African American embryos,” Aaron writes.

After six weeks, it was time to visit the doctor, who lived in Honduras, to receive their tiny embryos. And when they arrived, the couple was met with a completely different surprise.

“We began to describe everything to our doctor in Spanish (broken Spanish, that is). He asked us a few times if we were sure that we had transferred two embryos. Yes, of course we were sure, we said.”

The couple then discovered to their shock that one of those embryos had split in two inside Rachel’s womb. She was indeed pregnant—not only with twins, but triplets!

The birth went smoothly and soon Aaron and Rachel were not only parents of two but for five dark-skinned, beautiful young children.

“It’s been heartening to see virtually all of our friends and family express overwhelming support for our family and the unusual ways we’ve built it. In our minds, we are just living out our dream. A dream that may not look like the average family, but one that we are thankful could come true in light of our country’s history,” says Aaron.

“I felt sheer delight during this pregnancy watching my son and daughter, with his dark brown skin and her with the ringlet hair and slightly tan skin, kiss my white wife’s growing belly. Each evening they said good night to those three growing little girls in her belly, and now they get to finally say sweet dreams to their baby sisters—face-to-adorable-face.”

|I can remember a friend going through the adoption process telling me he had always wanted his family to look like a little United Nations. As I look at my growing family, I prefer to take it a step further, daring to hope that our family picture is a little hint of Heaven.”

Below you can learn more about the Halberts very special journey:

Love for one’s children is always more important than DNA, skin and blood!

Please share the Halberts’ story if you agree that all people are equal and that all parents have the right to form their own family without judgement from others.