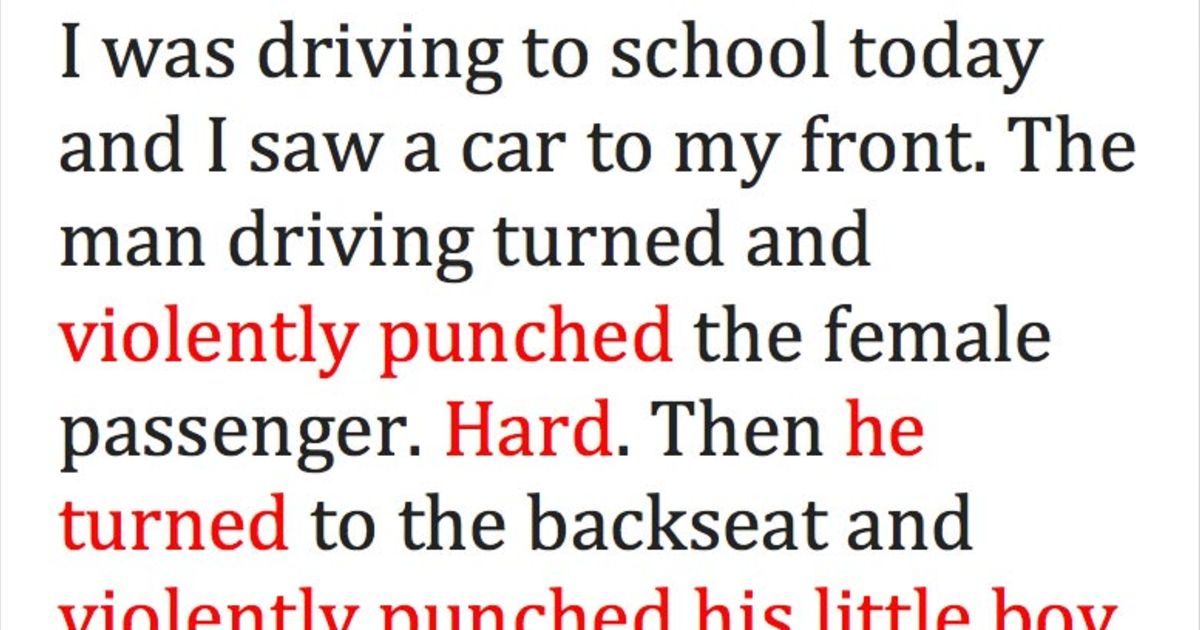 Some people should really be locked up because they completely lack the sense of how to behave toward their fellow human beings. This story is about one such person, and it made me terribly upset when I read it. It’s about a woman who’s out driving when she suddenly sees a man in the car next to her violently attack both his wife and their son. The woman is obviously shocked by what she sees. Bravely she decides to follow him so that he won’t be able to get away with what he’s just done. What she does next takes great courage and, above all, true humanity. This woman is my hero for what she did to help. Read her whole story below and don’t forget to share it when you’re done so that more people can read about her brave act.

“I was driving to school today and I saw a car to my front right. The man driving turned and violently punched the female passenger. Hard. Like, so hard her head looked like it was coming out the window. Then he turned to the backseat and violently punched his little boy in the face. In broad daylight, in traffic. It all happened so quickly and I just reacted.

I put on my hazards and got behind him and started blaring my shitty little horn. He tried to lose me on the interstate but I stayed with him and called 911. I told them everything, what happened, where I was at, his license plate number, anything I could think of.

I followed them to a walmart where he drove up to the fire lane upfront and almost hit the building. He ran inside, she followed and they left the kid in the car.

She had a bright red mark an her face and the little boy was crying and had a bloody nose and a red face. He hit them so hard.

I stayed with the car, which was parked really illegally and waited for the police officers.

I was shaking and crying because all I could think of was him hitting that little boy and I can’t stop replaying it in my head. I gave them descriptions and my information. I told them I would give a statement if needed.

They said they weren’t able to find the parents inside but they had the little boy.

I hope I saved him from something. I hope the mom sees this as an opportunity to get out of that situation. But more than anything, I hope I helped that little boy.

I can’t unsee it and I’m a mess right now.

I had a panic attack earlier and all I can think about is that little boy’s bloody, red face.

How do people do that? How do they hurt little ones? There’s a level of personal responsibility with adults but children have no choice. That little boy didn’t ask for that.

I’m so hurt by the world sometimes.

[Later] there was an update from the police officers I spoke to: they ended up finding the parents. They were in the changing rooms together and they had taken clothing and makeup and were changing clothes and she was applying the makeup. The officer told me he had some heavy warrants out for his arrest and they may not have found him if I hadn’t called everything in.

There were witnesses that gave statements about his erratic driving and how I tended to the child. I certainly hope that man goes away for a long time.

Share if you think this woman did the right thing when she follow them and alerted the police.