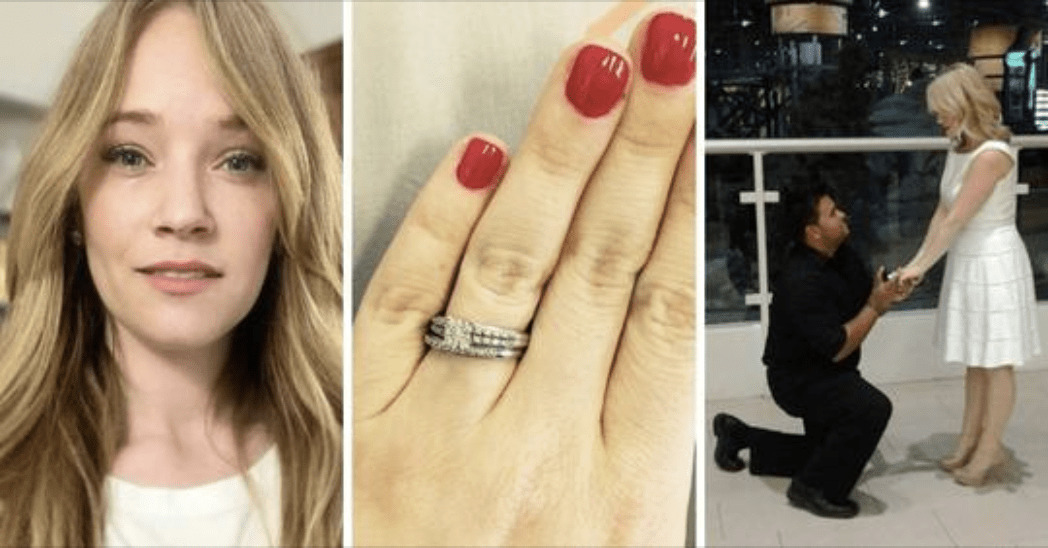 Is an engagement ring meant to symbolize love… or success? The answer may seem obvious, but as a recent online debate has proven – it seems not everyone would agree.

While Rachel Pedersen happily loves and cherishes her engagement ring, it would seem that one too many individuals around her felt a need to comment on it, voicing their opinion and criticising it for being “too small” and not reflecting enough of her and her partner’s “success”.

Dumbfounded and tired of such remarks, Rachel ultimately took to her Instagram account to send a powerful message to haters – with a life lesson that would make sure to set things clear.

The love story between small business marketer Rachel and her husband Poul Pederson began with a whirlwind of emotions that ultimately led to the everlasting love and marriage they are in today.

The two met via Rachel’s best friend (and now sister-in-law), who set Rachel up with her brother Poul. The chemistry was instantaneous.

It took just one week for Rachel and Poul to fall hard for each other.

Indeed, after a stunning just 13 days from their first date, Poul proposed to Rachel.

“Initially we were going to wait 6 months so people didn’t think we were crazy,” Rachel told The Knot. “Just a few days after that, we determined we would elope and get started on our life together,” she added.

At the time, Poul worked as a window washer and could only afford a ‘smaller’ engagement ring containing a 0.25 carat diamond.

“He surprised me with the ring at the Chapel of Love at the Mall of America! I had no idea he was going to propose on one knee… Or even that he bought me a ring! I had completely forgotten to get him one, but his surprise meant the world to me,” Rachel said.

For Rachel, that very ring symbolized and would continue to be tied to their “storybook, whirlwind, ‘make you sick’ love story” – and its size mattered so very little.

To her disappointment, when some people later saw her ring, their reactions and responses were less than positive. Rather than share her joy or congratulate her, some family members and friends would comment on its size, suggesting that it was too small.

In later years, some told her she should have it upgraded, to better reflect her and her husband’s growing ‘success’.

Rachel finally took to her Instagram page to express her dismay and explain the true meaning behind her precious engagement ring. For her, it was and would always remain perfect – no matter the size.

“It made me wonder if a big ring was needed to prove our love… But a part of me felt stubborn,” Rachel told The Knot. “Their intentions weren’t wrong, but I realized that other women had probably felt the same.”

For the loving couple, the small engagement ring and wedding band, despite its value of less than $1,000, “was perfect.”

“Friends and family often ask me when I’m going to have it ‘upgraded’…. After all, it doesn’t represent the level of success we are achieving,” Rachel continues.

“Wait a minute…. Since when did the size of someone’s ring become an indication of success?! For me, the ring is SO much more,” she adds.

Some have asked Rachel if she would at least dream of a bigger diamond on her ring, to which she responds: “Of course I have! I love diamonds… But what is a diamond without a rock solid marriage?”

“To me, a ring is just a token. It tells a story. But a ring symbolizes marriage, it doesn’t define a marriage,” Rachel told The Knot. “Our ring, our story are so special to us,” she added, adding that her husband agrees that they should never ever upgrade because of the personal story that is so intrinsically connected to the ring.

Rachel was pleased to see that her Instagram message brought in loads of support and words of comfort.

“The outpouring of women saying ‘yes! I agree!’ was so rewarding. I’m not alone in my thoughts about the ring,” she told The Knot, “Now after this public statement, I won’t ever upgrade my ring.”

“It tells me that in a society that continually screams ‘bigger is better!’ there are others who are searching for a greater and more foundational truth about marriage.”

Clearly, Rachel and Poul found a very unique love, and for Rachel, that very love shines brighter than even the biggest diamond on earth ever could.

“He drained his savings to gift me with a small token of his love. I say small, only because it pales in comparison with how big his love is, even now, after years of marriage. That, my friends, is success to me,” she said.

I must say that I cannot agree with Rachel more. Our society associates success to “big and shiny things” but love can never fully be represented in physical things.

Rachel’s story is a great reminder that it’s better to appreciate people for who they are and the love they bring into our lives, rather than what they can offer in terms of material things. Share Rachel’s story if you agree that it is important not to lose sight of what really counts!