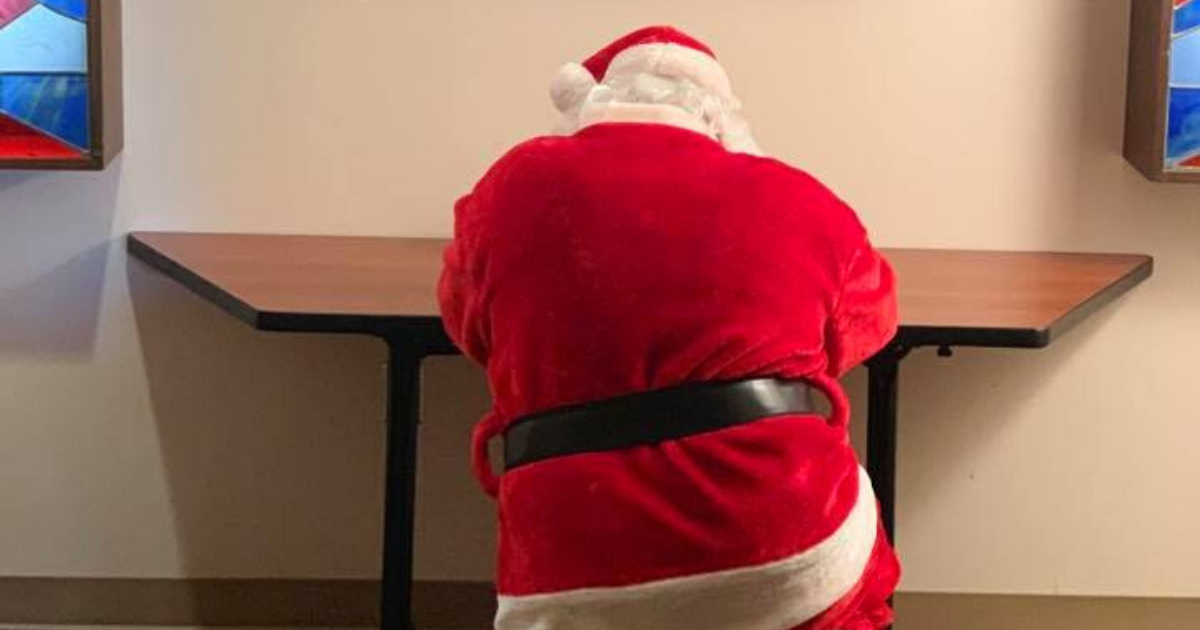 Christmas means something different to all of us.

Perhaps that’s what makes the holiday so magical around the world; everyone has their own memories of the sheer excitement and warmth they’ve felt during the festive season, and those memories stay with us even as we grow older.

Not only that, but Christmas has always been a time for giving, a time for compassion and love and good will to all men.

Every year we see people going above and beyond to put smiles on the faces of others, but few have managed to do so with the simplicity and purity of one particular man dressed as Santa Claus.

Mariana Whitley Tumlinson’s photo makes the rounds about this time every year. She said she encountered the emotional scene depicted, showing a private moment one Santa visiting a hospital stopped in the chapel to pray for the children.

Mariana reportedly works as the Director of Community and Public Relations at Valley Regional Medical Center in Brownsville, Texas, and had arranged for a visit from Santa Claus to cheer up all the children hospitalized over Christmas.

That very same Santa did the rounds to help restore a little cheer to the sick kids, before asking Mariana if he could enter the hospital’s chapel on the way out.

When he did so, he kneeled in front of a portrait of Jesus to pray. Fortunately, Mariana was on hand to get the perfect picture.

Low and behold, said imaged turned out to be immensely popular on Facebook. Mariana’s post has so far garnered over 40,000 reactions and 43,000 shares in the two years since it was uploaded.

Mariana’s post reads: “I keep getting choked up with this photo. Today, after Santa visited our patients and was on his way out, he noticed our Chapel. He asked if he could go in and pray for the kids he just visited. I, of course, said yes. I didn’t walk In with him right away but when I did I was so moved by this image I had to capture it. What a great reminder of the reason for the season.”

Regardless of your thoughts concerning Santa Claus and the possible commercialization of Christmas, I’m sure you’ll agree this was a truly fantastic gesture.

Please, share this article on Facebook to wish health and happiness on all the sick children of the world.