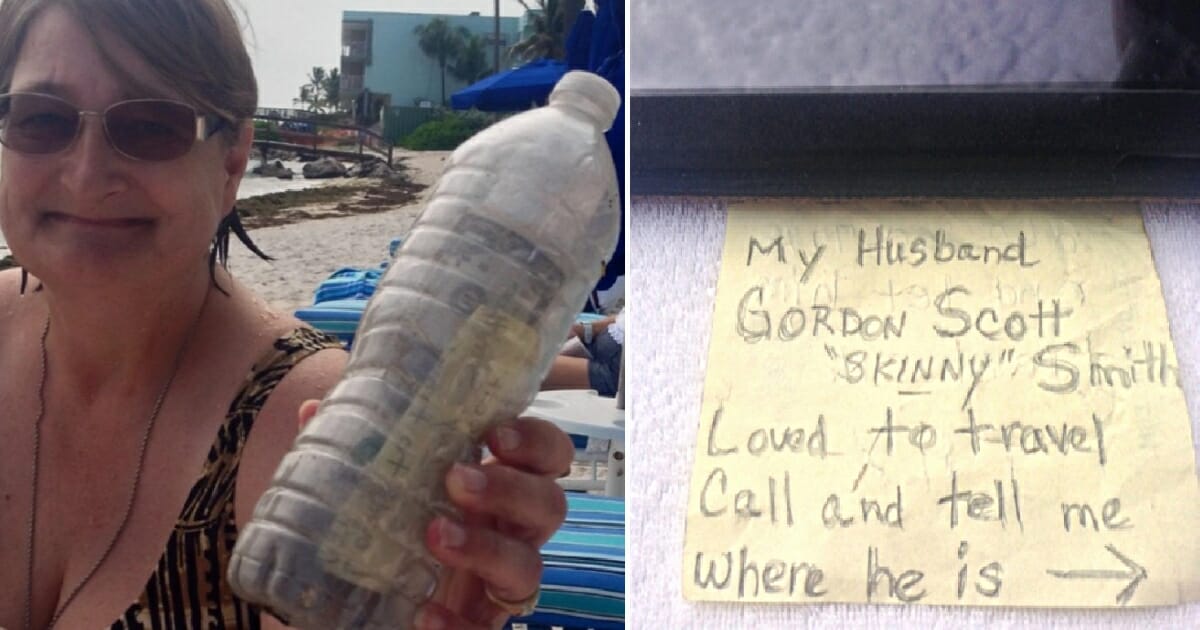 I hate seeing trash on the beach, especially plastic that I know will end up in the ocean and harm our sea life.

Judy Glunz Sidney felt the same and as she was collecting trash off a beach in Florida she picked up a plastic bottle.

But, on a closer inspection she realized that this was no ordinary bottle, it was a bottle that would open up a wonderful story about a man who loved to travel.

The co-owner of the “Glunz Ocean Beach Hotel & Resort” in Key Colony Beach, Florida, picked up the bottle and saw inside what looked like sand and two notes.

When she opened the bottle and read the notes, she realized this was no bottle of sand.

One of the notes read: “My husband Gordon Scott ‘Skinny’ Smith loved to travel. Call and tell me where he is … and let him travel on.”

“His ashes made it to Florida! So, one of the owners of a hotel, Judi was walking on the beach this morning cleaning…

Gordon Scott Smith aka Skinny loved to travel with his wife Beverly. They would visit Florida every year as they loved the sun and the ocean.

In 2012 the couple celebrated their silver wedding anniversary with a trip to Costa Rica but two hours after they returned Skinny died suddenly at the age of 57, USA Today reports.

To honor her beloved travel-loving husband Beverly scattered some of his cremated remains at a lake in Tennessee, Costa Rica and inside a bottle thrown into water off the Florida Keys.

In March 2012, Beverly Smith, 56, put the ashes of her late husband, Gordan Scott, in a bottle and tossed them off the…

The bottle also contained two dollar bills to cover the cost of a call to his wife to let him know where he was.

There was also another note from a man who had also found the bottle.

Judy continued the tradition and put Skinny’s ashes in a rum bottle, added a couple of dollars and her own note to the other two.

She even threw a beach party for Skinny and sent him “on the next leg of his journey,” USA Today reports.

Well Facebook friends this wonderful story we shared with you all last Sunday has morphed and grown! There has been to…

What a wonderful way to honor this travel-loving man. I wonder where he will end up next.

Please share to let people know the incredible journey that his man has been on and I hope that he rests in peace in the sea that he loved.