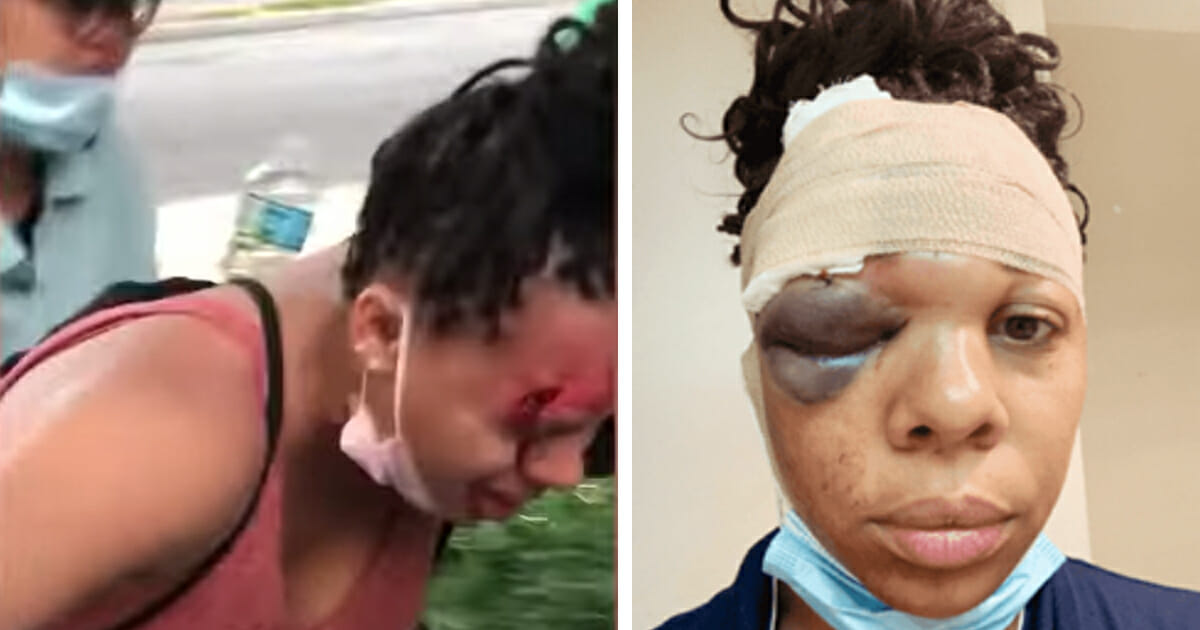 A truly shocking image has emerged of a young black woman with a blackened, bloodied eye and a bandage, after she was hit by a rubber bullet fired by a police officer.

As per reports, LaToya Tatlieff was one one of 1,500 peaceful protesters at Huizenga Plaza, in Fort Lauderdale, Florida, when her skull was cracked by law enforcement officers trying to break things up.

The protest she had joined, organized by Black Lives Matter Alliance of Broward, and other local groups, was protesting the death of George Floyd last week.

The organizers did their best to ensure the protest was a peaceful one, urging protesters not to act violently towards police officers. They designated peacekeepers in the event that tensions boiled over, and the demonstration took place without issue.

Yet, almost three hours after the protest LaToya was amongst those who returned to the park for a final prayer. There, they were met by a riot squad.

LaToya explained: “While continuing to walk toward my car, the crowd began to become angrier and angrier. Several of the protesters, including myself, began asking the other protesters to relax. And, we decided to kneel on the ground. While, we were kneeling, the officers continued to throw tear gas at us and even began pointing the guns at us.”

The kneeling protestors were forced onto their feet when cops fired tear gas. LaToya, meanwhile, was struck by a rubber bullet in her face. She went down in agony, initially not knowing what had happened.

“It wasn’t until I saw all the blood on the ground that it hit me. I’ve been shot,” she told the Miami Herald.

LaToya was helped from the scene by two other protestors, and thereafter rushed to hospital. Doctors there revealed that she had a fractured eye socket.

Reporters at the park, meanwhile, said that the crowd was dispersing after the police used tear gas, meaning there was no need for them to use foam bullets. The projectiles, which can travel 325 feet per second, are also not supposed to be aimed at a suspect’s head, as per police guidelines.

Of the incident, LaToya said: “I’m okay. My eye will heal. I was able to come home. But, George Floyd and many others did not.”

I’m truly shocked by the state of things in our country right now. Black Lives Matter, they have always mattered, and to think that people are still being prejudiced against in this day and age is dispicable.

Share this article to wish LaToya a speedy recovery and good health in the future.