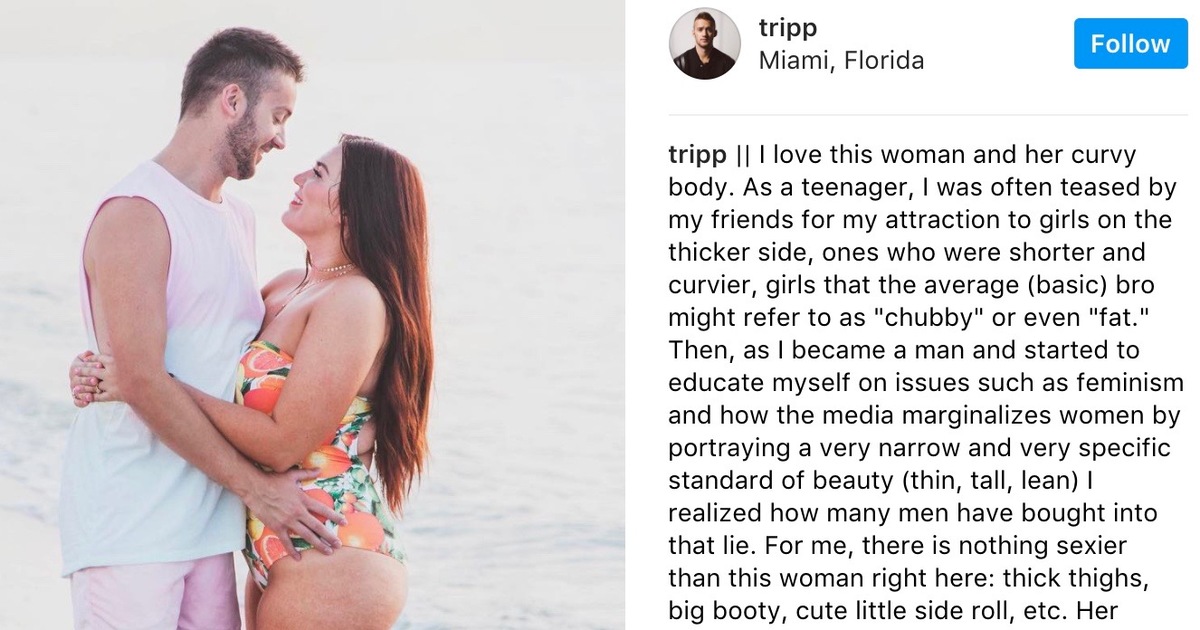 If you listen to what the media tells you, you might think that women who aren’t as skinny as a runway model and as blemish-free as a photoshopped magazine cover are somehow flawed.

But there’s nothing wrong with curves and stretch marks — beauty comes in all shapes and sizes.

One person who knows this and is telling the world about it is Robbie Tripp.

As a teen, Robbie was teased for being attracted to girls who were, as he says, “on the thicker side, ones who were shorter and curvier, girls that the average (basic) bro might refer to as ‘chubby’ or even ‘fat.'”

As Robbie got older, he educated himself about feminism and the portrayal of women by the media — and he realized how many men buy into the idea that all women should be skinny and tall.

Now, 26 years old and an author and activist, Robbie is married to a fashion blogger named Sarah. She inspires her 225,000 Instagram followers to stay positive about their bodies.

Robbie too exudes the same positivity. On July 31, he posted a picture of himself and Sarah on Instagram and included a message that he wanted to share about his beautiful wife. His post quickly went viral, and when you read it, you’ll see why.

“I love this woman and her curvy body.

As a teenager, I was often teased by my friends for my attraction to girls on the thicker side, ones who were shorter and curvier, girls that the average (basic) bro might refer to as “chubby” or even “fat.” Then, as I became a man and started to educate myself on issues such as feminism and how the media marginalizes women by portraying a very narrow and very specific standard of beauty (thin, tall, lean). I realized how many men have bought into that lie.

For me, there is nothing sexier than this woman right here: thick thighs, big booty, cute little side roll, etc. Her shape and size won’t be the one featured on the cover of Cosmopolitan but it’s the one featured in my life and in my heart. There’s nothing sexier to me than a woman who is both curvy and confident; this gorgeous girl I married fills out every inch of her jeans and is still the most beautiful one in the room.

Girls, don’t ever fool yourself by thinking you have to fit a certain mold to be loved and appreciated. There is a guy out there who is going to celebrate you for exactly who you are, someone who will love you like I love my Sarah.”

Since Robbie posted his message on Instagram, more than 20,000 people have liked it and thousands of Instagramers have responded with positive messages of their own.

“Beautiful words for a beautiful lady. Real and honest words, and that is what true love is. I’ve been married over 30 years and have been a different size for each year, but my husband has loved me unconditionally and still tells me how lucky he is lol. Love has to be the strength to get you through. Well said you,” one person wrote.

“My favorite part has been seeing all the guys tagging their girlfriend or wife and saying, ‘This is what I tell you all the time! I love your curvy body!’ Robbie told TODAY. “It’s awesome to see all these couples joining us in breaking down society’s beauty myth that women have to be a certain size or a certain shape to be considered sexy.”

Isn’t it great to see a guy step up and remind his wife how beautiful she is, even though she doesn’t fit into a size zero? It’s an example that we hope all guys, including Robbie’s friends who teased him when he was growing up, will follow.