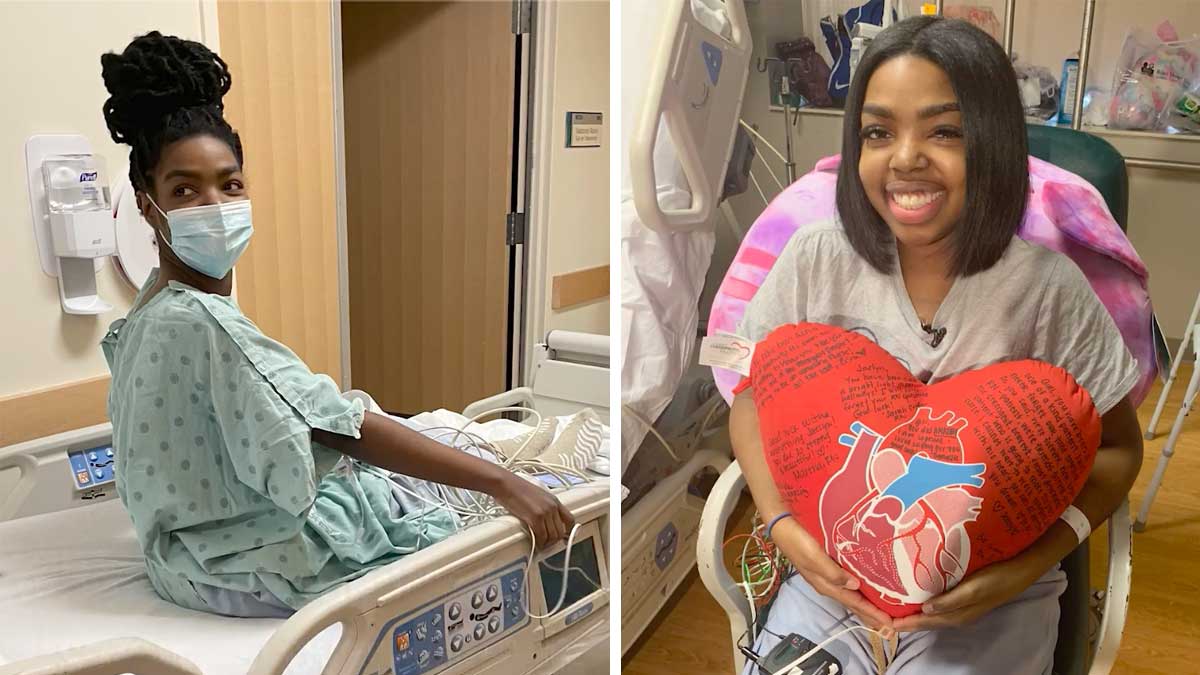 Jaelyn Kinchelow is hoping her story of being given a second chance will raise awareness about organ donation.

The 24-year-old recently received a heart transplant after suffering a heart attack 10 years earlier. Initially Kinchelow was against the transplant, but her family convinced her it was the best option to save her life. And on March 28 she underwent the life-saving surgery.

Kinchelow’s heart issues began when she was 14 years old. The teen from Avon, Indiana was running with her best friend during track practice when she began to experience pain in her chest.

She collapsed on the track.

The teen was transported to the hospital where she was diagnosed with an ischemic heart attack – prior to the heart attack she had no known issues with her heart – and promptly underwent open heart surgery.

“My main coronary artery tore and so I wasn’t getting any blood flow through my heart,” she said. “They took a vein out of my leg, and they put it in my heart.”

Although her heart was repaired, it wasn’t fully functional.

“After surgery my heart was only functioning at about 5%. They put me on an ECMO machine,” she told Good Morning America. “They didn’t think I was going to make it so they had to do all they could to keep me alive.”

She spent one month in the hospital, which included eight days in a coma, before she was able to return home.

Over the next 10 years she continued to live her life by staying active and attending school. But during her last semester of nursing school – she was inspired by those who saved her life to become a nurse – she began to experience shortness of breath.

“I couldn’t do my daily activities. I was too tired to walk upstairs,” she said. “I went to the hospital and spent three weeks in the hospital in January and they decided I needed to be on the transplant list.”

She spent two months at Riley Hospital for Children in Indianapolis where she was told she would need a heart transplant.

At first she was not a fan of the news. The wait for an organ transplant can be excruciatingly long. According to the Department of Health and Human Services, there are nearly 106,000 people currently waiting for an organ, and 17 people die every day waiting for a transplant.

Kinchelow was nervous because she was told her blood type would make it more difficult to find the perfect heart.

“That was one of the things I was just scared of.”

But on March 27, she received a call from her transplant coordinator. The woman named Debbie had “good news” to share.

“I said, ‘Debbie, if you’re not calling about a heart I don’t want to hear it.'”

And that’s exactly why Debbie called. A heart had been found, and Kinchelow’s surgery was scheduled for the following day.

‘I just lost it after that.’

While Kinchelow recovered from her transplant, she received a letter from her donor’s family.

“They said the family jumped through hoops to make sure they got a letter to me,” she said. “That was a huge surprise and so emotional for me.”

Not only was the surgery life-saving, but it was life-changing.

Prior to receiving a new heart, Kinchelow never considered being an organ donor, but after learning the stats and seeing how much it can help another person, she’s reconsidered.

“I wasn’t really like big on donating. It wasn’t a priority of mine,” she said, “but when you’ve actually gone through it, or you know somebody that’s gone through it, you learn really quickly how important it is.”

After being discharged from the hospital the soon-to-be nurse said she plans to finish school so she can get back into the medical field to help those like her.

“Whether that be an advocate for people being donors, I just know that there’s something bigger that I need to accomplish,” she said. “With this whole transplant thing, it’s going to take me pretty far… Farther than what I was thinking that I would before.”

Are you an organ donor? I am! I think it’s one of the easiest ways to help another person.

Share this article if you’re an organ donor too!