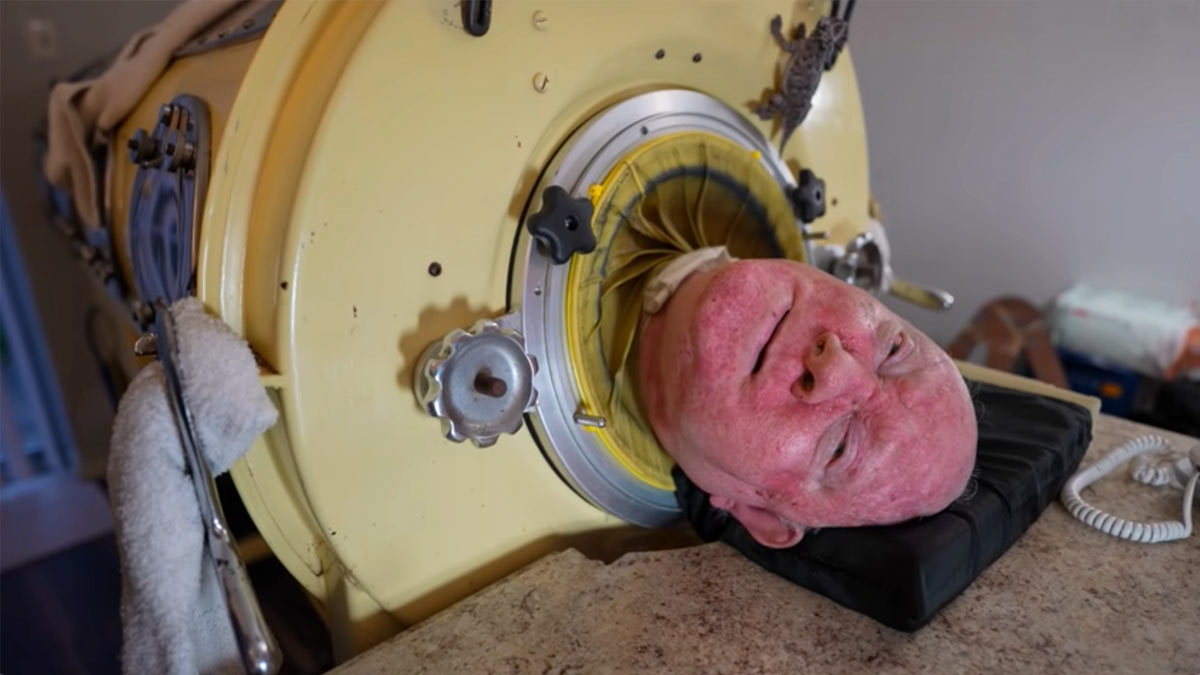 Paul Alexander, 76, has lived a life unlike many others. For the majority of his life, he’s lived with an iron lung, and he’s one of the last people in the world still using the respirator which dates back to the 1928.

Despite his unusual circumstances, he’s lived an incredibly full life and he’s never accepted anything less.

“I am not going to accept from anybody their limitations on my life. Not gonna do it. My life is incredible.”

When Paul was just six years old he ran into his family’s home in a suburb of Dallas, Texas, and told his mother he wasn’t feeling well. Since his birth in 1946, Paul had been a normal, vibrant, and active child – but now something was clearly wrong.

“Oh my God, not my son,” Paul recalled his mother saying.

Following doctor’s orders, he spent the next several days in bed recovering, but the boy clearly had polio, and he was not getting better. Less than a week after he started feeling sick he couldn’t hold anything nor could he swallow or breathe.

His parents finally rushed to the hospital where he joined countless other children experiencing similar symptoms.

Before vaccines were available for polio, more than 15,000 people were paralyzed from the virus. Polio, an incredibly contagious infection, can spread even when an infected person has no symptoms.

The symptoms of polio include fatigue, fever, stiffness, muscle pain, and vomiting. In rarer cases, polio can also cause paralysis and death.

Paul was examined by a doctor and pronounced dead, but then another doctor took a look at him and gave him another chance at life.

The second doctor performed an emergency tracheotomy, and following the surgery, Paul was placed inside an iron lung.

When he eventually woke up, three days later, he was among several rows of children also encased in iron lungs.

”I didn’t know what had happened. I had all kinds of imaginings, like I’d died. I kept asking myself: Is this what death is? Is this a coffin? Or have I gone to some undesirable place?” the Texas native told As It Happens host Carol Off in 2017.

Paul, who also had a tracheotomy, couldn’t speak, making the whole event even more terrifying.

“I tried to move, but I couldn’t move. Not even a finger. I tried to touch something to figure it out, but I never could. So it was pretty strange.”

The machine, invented in the late 1920s, was the first to ventilate a human being. It was often referred to in the early days as the “Drinker respirator” the device is hermetically sealed from the neck down and creates a negative pressure in the chamber that draws air into the patient’s lungs. If it generates overpressure, the air is forced out of the lungs again, and the patient exhales.

Paul spent 18 months inside the metal canister recovering from the initial infection. And he wasn’t alone. The year Paul was infected by the virus, 1952, was a very dark year looking at the statistics.

“As far as you can see, rows and rows of iron lungs. Full of children,” he said, according to The Guardian.

While some may have given up their will to live, it only fueled Paul’s will.

He would hear doctors say, ”He’s going to die today” or “He shouldn’t be alive” whenever they passed by him, and he wanted to prove them wrong.

And that’s exactly what he did!

In 1954 he was discharged from the hospital, but he quickly learned his life was drastically different than before.

“People didn’t like me very much back then,” he said during a video interview in 2021. “I felt like they were uncomfortable around me.”

But with the help of a therapist named Mrs. Sullivan, who visited him twice a week, little by little his life began to improve. His therapist made a deal with him that if he could “frog-breathe,” a technique where you trap air in your mouth by flattening your tongue and opening your throat, without the iron lung for three minutes she’d get him a puppy.

It was hard work, but within a year Paul was able to spend more and more time outside of the iron lung.

When he was 21 he became the first person to graduate a Dallas high school – with honors! – without ever physically attending class. He then set his sights on college, and after several rejections, he was accepted to Southern Methodist University.

“They said I was too crippled and did not have the vaccination,” he recalled. “Two years of tormenting them, they accepted me on two conditions. One, that I take the polio vaccine, and two that a fraternity would be responsible for me.”

He went on to graduate from Southern Methodist University and then attended law school at the University of Texas at Austin. He passed the bar and became a lawyer in the Dallas-Fort Worth area.

“And I was a pretty damn good one too!”

Even after a 30-year long career in the courtroom, he continued to keep busy by writing a book, which he typed all by himself using a pen attached to a stick.

According to a Gizmodo, Paul is believed to be one of the last people alive today who still lives in the near-obsolete machine. The 76-year-old is confined to his old iron lung around the clock and has spent much of his life in a can.

”I have travelled with it —  put it in a truck, took it with me. I’ve gone to college with it, lived in a dorm. That freaked everybody out,” he said.

Paul’s type of iron lung hasn’t been manufactured for half a century because – ventilators are now much more advanced and sophisticated.

But the polio survivor prefers his metal chamber, even though new technology is available. But the Dallas attorney had to make a desperate YouTube announcement when the metal lung almost broke down seven years ago. Fortunately, there are still abandoned machines all over the country, so many spare parts are out there. Paul has also had help from enthusiasts who love approaching old technology.

Paul, who has outlived both his parents and his older brother, is now working on a second book!

Paul said he’s been able to live such a fulfilling life because he “never gave up.”

“I wanted to accomplish the things I was told I couldn’t accomplish,” he said, “and to achieve the dreams I dreamed.”

Polio has effectively been wiped out of the United States since 1979. However, vaccine-derived cases of polio crop up every now and then which are still a cause for concern.

Paul is definitely an inspiration. He has crafted his life against all odds and has a courageous and compelling story that I hope everyone who reads this will share.

His determination shows that the only limits are the limits we place on ourselves. Please share his story with all your friends and family to inspire others.