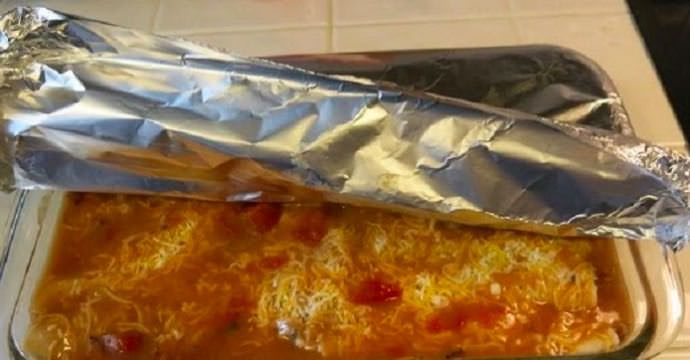 Do you have a roll of aluminum foil in your kitchen cupboard? If so, you’re not alone.

I use foil for a lot of things, both for cooking and storing food.

I use it cover dishes that have received turned brown in the oven but aren’t quite done, I use it to grill fish, and I use it instead of baking paper, too.

But after reading an article in the Huffington Post, I realize this is something we should all be careful about.

Using too much aluminum with food is not good at all — because the metal can seeps into food.

The human body can handle a certain amount of aluminum, but when there’s too much, it might be dangerous.

The WHO (World Health Organization) says that 40 milligrams per kilogram of body weight is a safe amount to have in the body. So, a person weighing 60 kilograms (132 lbs) can get 2,400 milligrams (almost 0.1 ounces) without worrying about it.

That might sound like a lot, but the fact is, aluminum isn’t just found in the foil. It’s also in some pans, and corn, some cheese, salt, and tea also contains aluminum. And in addition, it’s also found in some medicine and in deodorant, and it’s also used to clean water.

Researchers are studying the risks involved when you take in too much of the metal. For example, a high concentration of aluminum has been found in the brains of patients suffering from Alzheimer’s..

Researchers have found that Alzheimer’s disease is a recent disease and is due to changing living conditions and industrialization. Aluminum may well be one of the contributing causes of the serious disease.

Studies also show that a high aluminum intake is also harmful to people suffering from bone diseases and have impaired renal function. And it also reduces the growth of brain cells.

Considering that we come into contact with aluminum in a variety of ways, it might be good to take a look at the pots and pans you use to cook with.

Aluminum pans often have a protective layer that prevent the hazardous metal from leaking, but that layer can disappear when you clean them. One way to “secure” a pot or pan is to boil water in it repeatedly.

This gives it a matte surface, which is a sign of oxidation and prevents aluminum from seeping out. Your saucepan might look nicer when it shines, but it’s much better when it has a matte surface.

Aluminum foil, on the other hand, is a completely different story.

Because foil is a disposable material, it has no protective coating.

Therefore, food that comes into contain with foil while cooking will absorb aluminum. Ghada Bassioni, a professor and head of the chemistry department at Ain Shams University, studies aluminum foil and cooking and has found that the amount of aluminum absorbed is high.

So try to use other materials for cooking and baking. You can protect cold food with foil, but not for long. After a while, the aluminum will also seep into it.

Share the article with your friends on Facebook so that they are also careful when using aluminum in the future!