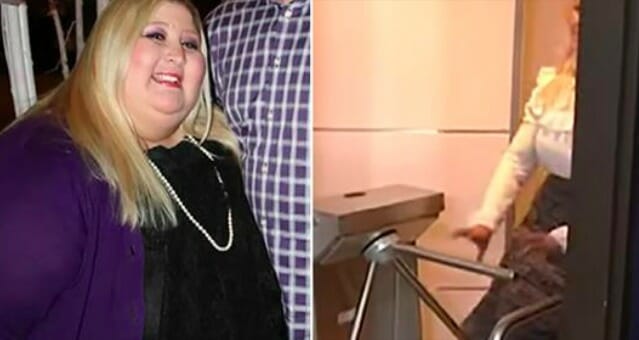 We all know that regular exercise and eating right are important to keep your body healthy. But many of us also know what getting into a vicious circle means and how hard it can be to break bad habits. Determination, self-confidence and motivation are required to break a bad pattern — but this is easier said than done.

But then, there are certain moments that just push us over the edge and change everything. Moments like looking at yourself in the mirror and suddenly realizing you no longer recognize yourself. Or — an embarrassing incident that hits you so hard and shakes you so badly that it just sets everything else in motion.

Jacqueline Adad had been fighting for obesity most of her life. But it’s only when she started college that her weight problem took a turn for the worse.

Chips, soda and pizzas became an increasingly big part of Jacqueline’s everyday life, and as she drowned down fast food, her weight increased dramatically.

Ultimately, Jacqueline weighed a whopping 510 pounds. Those things she had always loved so much, such as clothes and make-up, became a thing of her past and she became increasingly withdrawn.

Jacqueline had never felt so humiliated. But the incident would also serve as a big kick in the butt. It turned out to be the moment that would change everything.

The very next day, she decided to join a weight loss program. She started training at home, and slowly began to change her habits — but she was also careful to take things one day at a time.

In addition to Jacqueline’s new ability to control her own weight, her weight loss also made her feel better on the inside. She got back her self-esteem, and soon Jacqueline and her boyfriend got engaged — right by the ride she’d gotten stuck at!

Watch the video below to learn more about about Jacqueline’s journey and to see her incredible transformation. You can also hear about John Di Benedetto — a man who made an equally inspiring journey.

Going through such a long journey is absolutely daunting. I’m so impressed by Jacqueline’s amazing willpower and most importantly, I’m so glad she is able to feel great about herself again. That’s by far the most important thing!