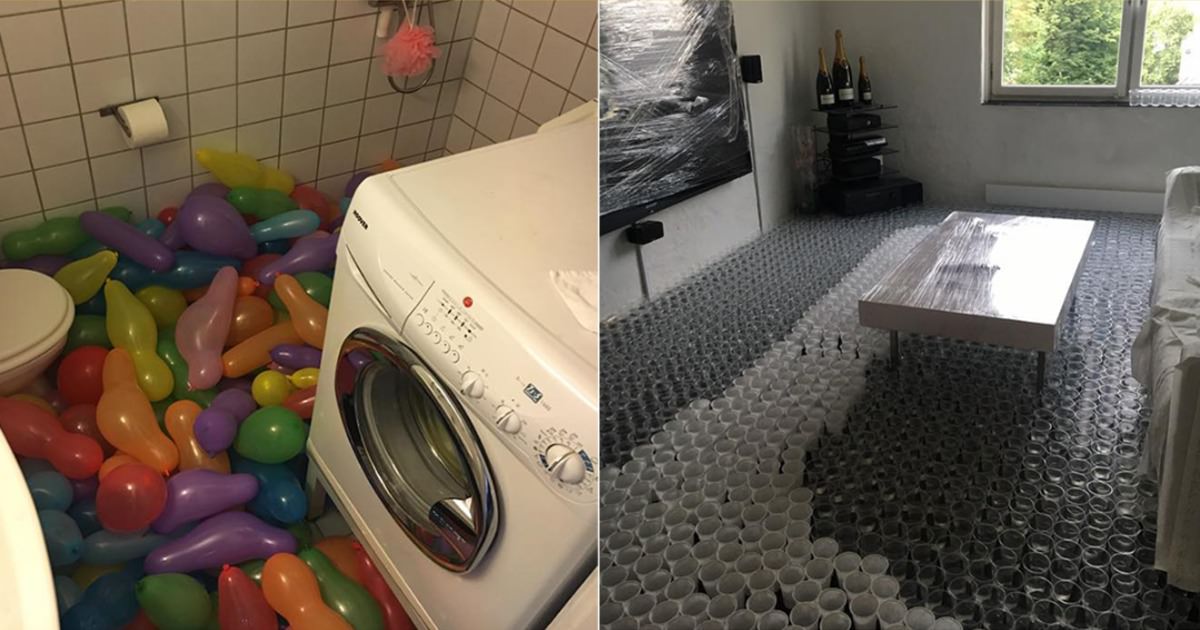 Erik Schmelck from Oslo, Norway, went on vacation and looked forward to coming home to his apartment after a little time off.

But upon his return, he discovered that his apartment had been somewhat… redecorated.

While he was away, his friends took the liberty of completely ‘redesigning’ his floors, kitchen, bathroom, and furniture. But their design ideas were definitely outside of the box.

“They told me it took 24 hours to set the whole thing up,” Erik told local Norwegian newspaper Nettavisen.

Have a look at their work of art below. 🙂

That was certainly Erik’s sentiment upon returning to his native Norway after an extended road trip in the US.

But what he discovered upon his return left home a little less than appealing. 3,200 plastic glass filled to the brim with water – wall to wall on his floor.

In addition, one hundred inflated balloons lay in his bathroom. His sofa was entirely wrapped in toilet paper and his television, in saran-wrap style plastic.

The culprit? He’d left a set of keys with some friends, who decided to royally prank him.

“I actually should have been really shocked and angry. But something in my head said I should have sensed this, how stupid was I to leave the keys to these guys,” he told Nettavisen.

So Erik began to clean the massive prank up. It took about 4 hours, thanks to help from some friends.

Erik is, of course, not going to let go that easily – he’s planning his own revenge on the guys behind the prank.

“I have some ideas about how I will get them back. But I obviously won’t say what they are,” he says.

It is not the first time his friends prank each other: A few years ago, one guy from Erik’s group of friends had his car completely covered in post-it notes; on another occasion, a friend’s car was completely shoveled into a bank of snow.

What do you think? Funny or just irritating? Share your thoughts in the comments!