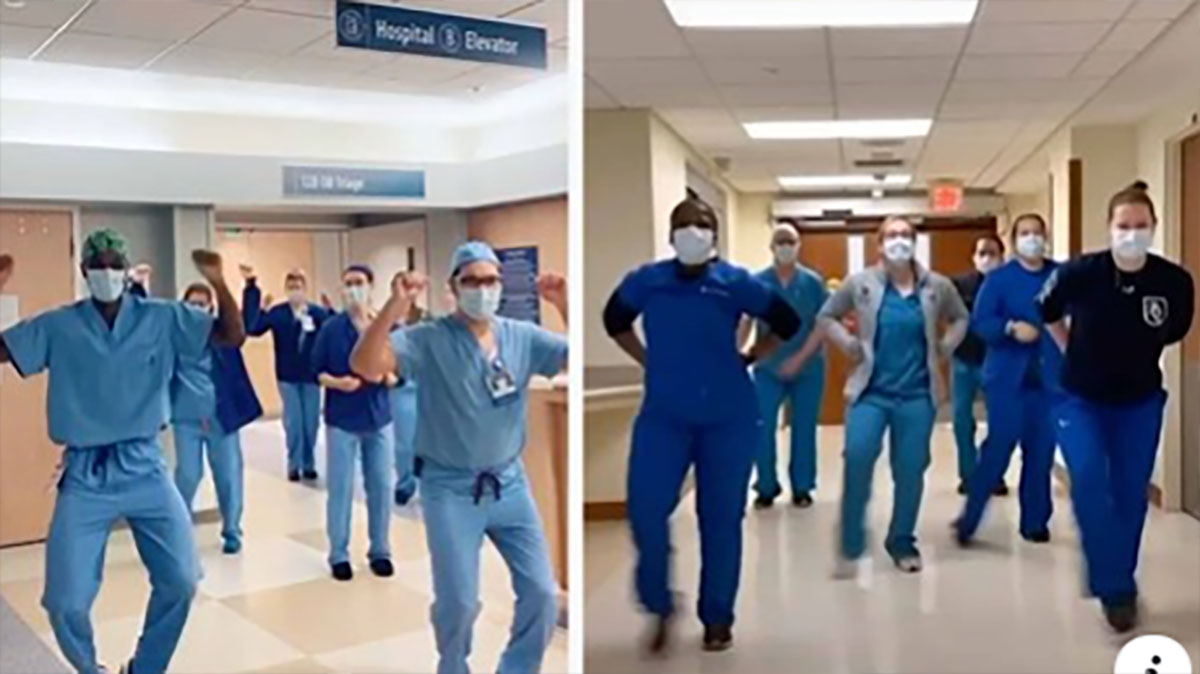 Those working in the medical field on the frontline during such unprecedented times have shown themselves to be the true heroes of our time.

Working long hours without a break, often being the only person allowed by the side of those sick and dying – most of us would hit breaking point when faced with such horror.

But, not only are they doing the hardest job but also helping to lift us up during these troubled times by dancing.

Dancing can help boost your mood, reduce stress, and lessen feelings of anxiety. In fact dancing just once can release mood-boosting chemicals that positively impact our mental health for up to a week.

In Oregon Dr. Jason L. Campbell is helping to keep spirits up by dancing and incorporating moves to replace handshakes to help us all stay safe. A video of him bumping feet, or foot shaking, has been watched by more than 270,000 people.

His dancing helps remind us to stay optimistic and that we’re not alone during these troubled times.

Meanwhile in India one doctor is using his dancing skills to cheer his patients up.

Dr Arup Senapati, a surgeon in Assam, hit the headlines for his uplifting and funny dances. He said whatever his mood, happy or sad, he danced.

Admitting that he wasn’t the best dancer, Dr Senapati said whatever moves he could do he had learned from his favorite Indian actor and dancer Hrithik Roshan.

The dancing doctor caught the attention of the movie star who tweeted a video of him dancing with the caption: “Tell Dr Arup I’m gonna learn his steps and dance as good as him someday in Assam . Terrific spirit.”

Meanwhile, health care staff at Jefferson Hospital in Philadelphia released a video of themselves dancing to encourage people to stay home.

Staff at an NHS hospital in Birmingham, England, went viral on TikTok for their moves while wearing, what must be very warm and restrictive, PPE clothing.

While just a few miles away a team of nurses helped lift spirits while raising vital hospital funds with their synchronization skills in a video which soon went viral.

The video was posted on TikTok and showed the team of six cardiology nurses dancing to ‘Drank & Drugs’ by Lil Klenie.

Jill San Juan, a nurse at Texas Medical Center, shared a video of herself dancing during her break at the hospital to Janet Jackson’s song “All for You”.

She tweeted the video with the caption, “Keeping our spirits up at the hospital! Please RT/tag show @JanetJackson She’s getting us through rough times! I love you J! #janfam #JanetJackson.”

The nurse’s impressive moves caught the attention of Janet Jackson who shared Jill’s video on her Twitter page with the caption “I love you too and thank you for all that you are doing!” as per ABC News.

She also made it very clear that no PPE equipment was wasted during the filming of her impressive video.

As if working the most difficult job right now wasn’t enough these amazing individuals are also working so hard to raise our spirits while sending out important information to help keep us safe.

Please share these uplifting videos with your friends and family and help encourage more people to show these heroes our love. Thank you for all you do!