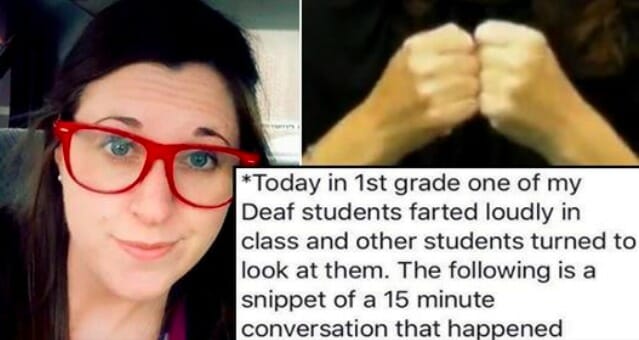 Being a teacher is probably one of the most rewarding jobs in the world. Teaching children with special needs certainly has its challenges — but I can only imagine is also all the more fulfilling.

First-grade teacher Anna Trupiano works at a school that hosts deaf, hard-of-hearing, and hearing students. While Anna spends her days teaching regular subjects like science and math, she is also tasked to help her students get by and thrive in a society that doesn’t always take their needs into account.

While this story is absolutely endearing and had me smiling ear to ear, it also raises the important question: What more can we do for our young ones with special needs?

While in class one day, one of her deaf students, a six-year-old well, farted. Quite loudly at that. Some of the hearing students in class turned to look at the student and began to giggle.

But as it turns out, the deaf student had never quite realized that farts, well — make noise.

At that point, Anna was forced to engage in the sweetest and many might say, rather hilarious, dialogue with her students and explain the basics of farting in public.

This was both hilarious and sweet dialogue that must have made this teacher’s day. But it also raises the question on the kind of added effort we have to become better at making when dealing with people with special needs.

“I know it started with farts, but the real issue is that many of my students aren’t able to learn about these things at home or from their peers because they don’t have the same linguistic access,” Anna told GOOD.

“So many of my students don’t have families who can sign well enough to explain so many things it’s incredibly isolating for these kids,” she continued.

I couldn’t agree more with this wonderful and clearly caring teacher!

In case you’re curious, here is how to sign fart:

Share Anna’s wonderful little anecdote if it brought a smile to your face, too — it’s something I’d certainly never thought of before!