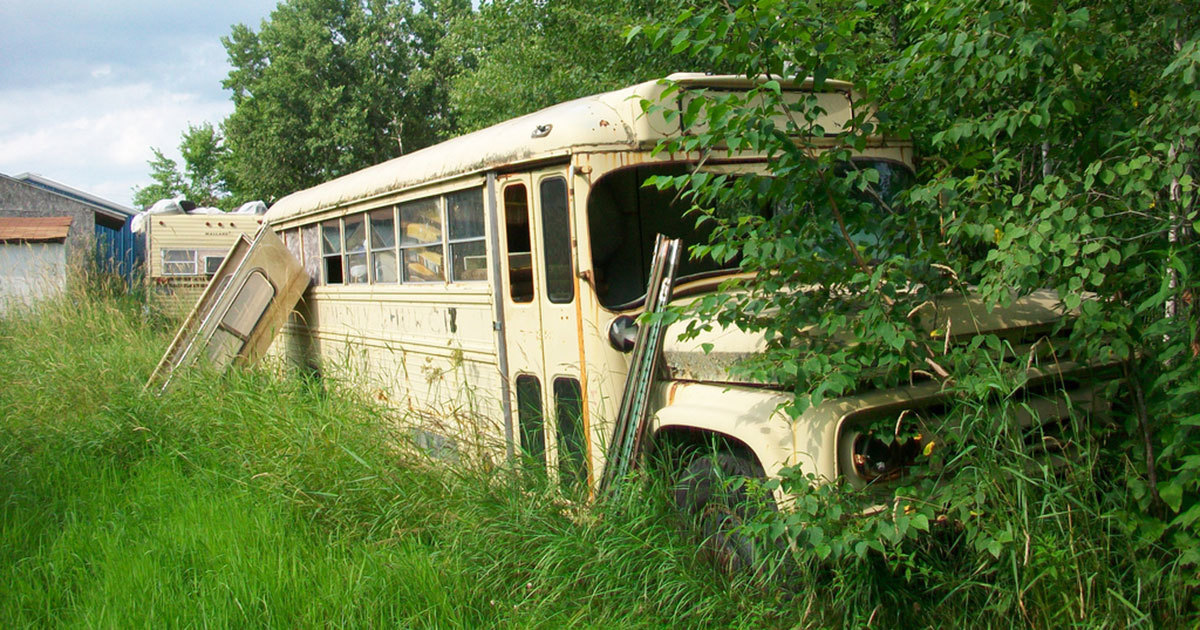 I think everyone recognises the feeling that you just want to break away from everything and start again.

So did Felix Starck and his girlfriend Selima Taibi, who both grew up in Germany.

They got tired of the rush of 3 million people in Berlin and decided to try something completely different – they wanted to explore the wilds of America.

Soon, they also had the idea of buying an old school bus and renovating it. Renovating a classic American school bus is nothing new in itself, just check out this excellent example .

But Felix and Selima gave themselves an extra challenge – they wanted to build the bus  and live in it.

Incredibly, the couple managed to transform the rickety old bus all on their own! Even more impressively, they undertook the renovation using only recycled materials.

They call this trip “Expedition Happiness” and are exploring wilds of North America right now.

And who would not want to live their like this? Check out the inside and you will understand what I mean.

Selima Taibi and Felix Starck escaped city life in Berlin to go out on the roads of America.

But to fulfill their dreams they had to have both a place to live and also a convenient way to get around the continent.

So, they thought, why not combine the two things?

They first moved to America, where they were shopping around and found an old, abandoned school bus.

The couple immediately started renovating- first of all, by throwing the seats away.

Then, the entire passenger compartment was blown out, so they could start over with a new design.

The next step was to build the walls of what would soon become the different rooms.

As you can see the pair used mainly wooden materials.

When you have a fairly small home with small spaces, smart storage sites are a must!

Parts of the interior were painted.

Felix and Selima chose bright colors to give the bus a more airy and open feel.

Selima also worked hard to get to the bathroom, where she carefully laid the green mosaic tiles.

The exterior of the bus was also quite worn, so the couple decided to repaint the facade.

And the finished result is worth a big round of applause. Elegant, but also very cozy!

The bus is full of fine detail that gives everything a rustic look – but it still feels modern and clean.

And the original windows let in lots of light, which really adds to the overall impression.

The kitchen has a sink, a stove and a refrigerator – everything you could possibly need.

It is also has a surprising amount of free space!

Felix, who is a film director and Selima, who is an artist, also wanted the opportunity to work during the big trip.

So that’s why the couple built a small office with two computers and monitors. Neat!

The bedroom is not so bad either …

The bed is on a raised platform, just under the bus’s small sunroof.

Or how about waking up to this? Wow!

All furnitureis well proportioned, making it possible to have a large space for other things and to keep the floor clean.

The couple’s dog, Rudi, has, of course also joined the journey from Germany.

He has got his own bed on the bus, behind the driver’s seat and seems to enjoy it!

Maybe it’s not so strange that the dog feels good, right?

With the bus built (at least “98 percent” according to the couple), Felix and Selima have set out on the roads.

They started their trip in Canada, where they were based in the brutally beautiful landscapes of British Columbia.

Then the couple went on the road along the American west coast.

Is it not awesome and inspiring when people follow their dreams?

If you know someone who would love to see this couple’s renovation and adventure, please share the article with all your friends on Facebook!