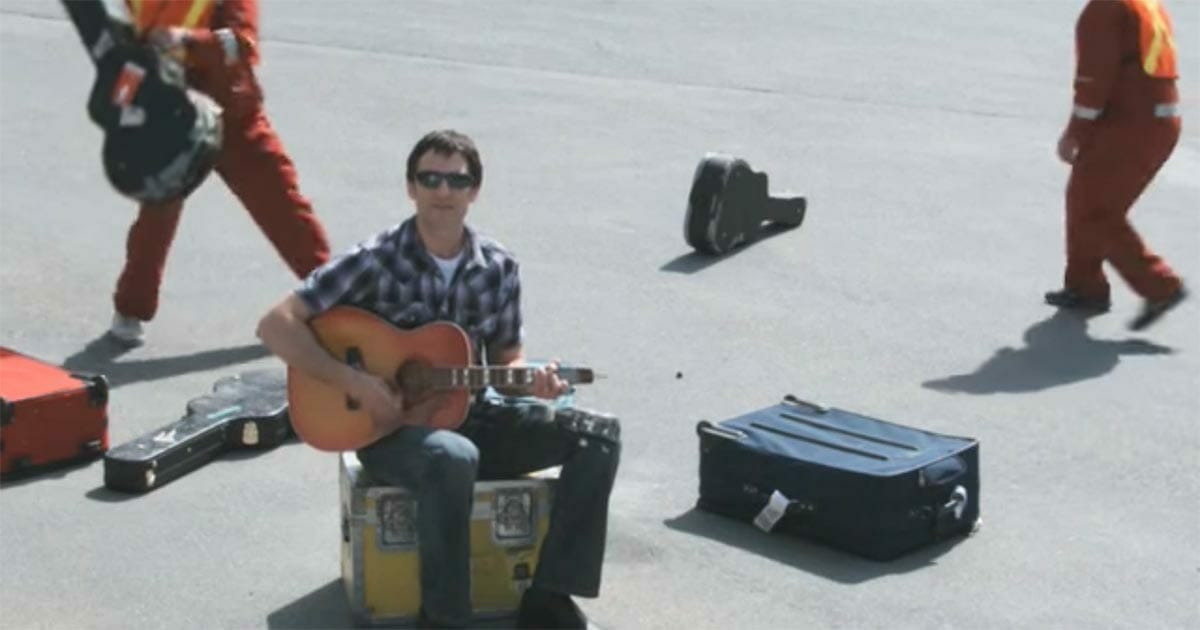 I’m sure you know how it feels when people in the service industry make a mistake and don’t do anything to fix the problem.

As a customer, it can be difficult to make a big company recognize they’ve treated you badly. But you can always do what this man did. He really gave the airline a piece of his mind – in the most public way possible!

When Canadian musician Dave Carroll landed in Chicago in 2008, he heard someone in the seat behind him say, “My God, they’re throwing guitars out there!”

Dave and his band members looked through the airplane window, and saw their guitars being thrown around by the staff on the ground. He immediately talked to three air hostesses, but they showed no interest in Dave’s problem.

When the band, Sons of Maxwell, arrived in Chicago, Dave’s worst fear was confirmed – his beloved $3,500 Taylor’s guitar was destroyed.

He started a nine-month process of calling and writing to the airline, but they kept referring him to different people. Eventually he spoke to a manager who said it was his own fault and that he should have submitted a notification of injury within 24 hours of the incident.

The airline said they were sorry about what happened but their final answer was “no”. They would not replace his guitar and they would not answer any more questions about his case.

Dave felt hopeless trying to fight with such a big company, but he didn’t want to just give up that easily.

He decided to turn to a unexpected weapon: his music.

His goal was to reach at least one million people with a total of three music videos. He hoped it would force the airline to reconsider his case. He knew that there must be other people out there who had encountered similar situations.

He wrote and recorded the first song, and with the help of some friends they made a music video. The total budget for the song and video was $1,500, and that was mainly for buying lunch and sombreros.

On July 6, 2009, he uploaded the movie on YouTube and went to bed. What happened in the coming days changed his life forever.

The song he wrote became a great success and made news around the world. His phone was ringing constantly for weeks, his record sales shot up, he got a lot of bookings and for several weeks he was on TV and radio. Even Bob Taylor, the owner of Taylor Guitars, called him to offer him two new guitars.

Dave Carroll is now a sought-after public speaker, as well as a well-known musician and internet phenomenon. But above all, he today fulfills an important function as ambassador for consumers.

So what were the consequences for the airline, then?

In addition to being shamed in front of the whole world, their shares fell by 10%, which cost the shareholders approximately USD $180 million.

It’s amazing what we can achieve with music. This story really puts all careless airlines in their place! Share if you also think that music is the most powerful force in the world.