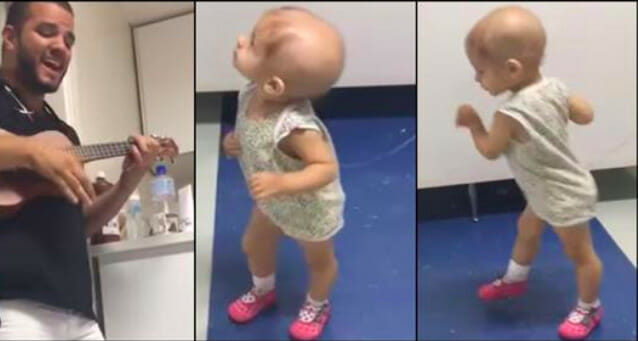 Around the world, there exist angels looking over us and doing what they can to make our lives better, easier or simply more joyful.

Dr. Paulo Martins is one such angel.

Dr. Martins works at the Ribeirao Preto Clinical Hospital in Sao Paulo, Brazil, where his patients sing much praise to him. But he has one patient in particular who one can only call his ‘number one fan.’

Seventeen-month-old Sophia Romao Bueno sadly suffers from a rare childhood immune system disorder. The tiny but brave girl has been fighting the disease for a while, meaning she has had to spend quite some time in hospital.

Treatment isn’t easy and can take a toll on her tiny body. But thankfully, she is under the care of an angel…

More Than Just a Doctor

Dr. Martins knows how to cheer up his patients’ days. The doctor has a rather unorthodox approach to ‘treatment’ — including the use of music.

One day, Dr. Martins brought in his ukulele to entertain and soothe his patients. When little Sophia heard the sound of his playing, she was immediately entranced. Within seconds it appeared little Sophia would definitely become his superfan!

Little Sophia stood adamantly by, awaiting her very own entertainment. Dr. Martins had never played a children’s song before, but Sophia’s father Julliano assured him that she loved ‘adult’ music just as much — and local country music in particular.

Julliano suggested that Dr. Martin play Sophia’s very favorite song, and thankfully, the doctor knew it well. It turns out Dr. Martins isn’t just a medical professional — he has a wonderful singing voice!

Sophia, naturally, became thrilled when she heard the doctor play the first strings, immediately recognizing her favorite tune. And, despite being tethered to her IV pole, she began to dance along, swaying back and forth and stomping her tiny feat to the beat.

Needless to say, their interaction is simply priceless.

The sounds of Dr. Martin’s playing eventually attracted medical staff, who gathered around for the absolutely heartwarming scene — something everyone could enjoy as they momentarily could forget the challenges of their circumstances.

Watch the magical moment in the video below.

What a precious moment! Please share if this interaction warmed your heart too and to wish sweet Sophia a speedy recovery!