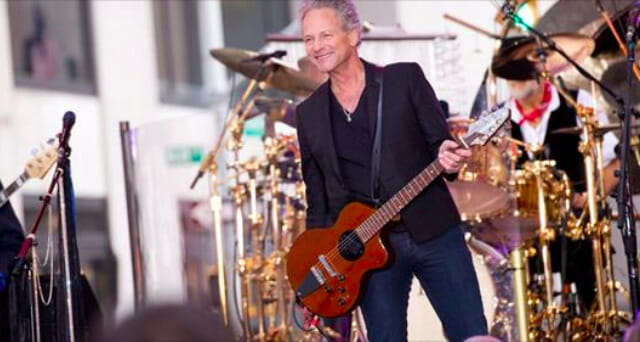 Who else remembers legendary band Fleetwood Mac with great fondness? Formed in the late 60s, the American-British band’s music has certainly left its stamp on the music world. They have sold over 100 million records worldwide, making them one of the world’s best selling bands.

In 1974, a very talented guitarist by the name of Lindsey Buckingham joined the band as lead guitarist. Following his joining, Lindsey can be credited for writing some of the band’s most prominent hits, including “Go Your Own Way,” the lead single from popular 1977 album, Rumours. In 2018, after 43 years with Fleetwood Mac, Lindsey and the band went their separate ways.

Sadly, Lindsey Buckingham, whose family has a history of heart problems, recently underwent open heart surgery — but as his wife has shared and to his fans’ delight — he is currently nicely recovering.

The surgery did unfortunately end up damaging Lindsey’s vocal cords, his wife Kristen Buckingham announced in an Instagram post.

“[Lindsey] is now recuperating at home and each day he is stronger than the last,” she wrote. “While he and his heart are doing well, the surgery resulted in vocal cord damage. While it is is unclear if this damage is permanent, we are hopeful it is not.”

Lindsey added how challenging the year has been for the family and that all of Buckingham’s tour dates will be paused until he is fully recovered.

“Our gratitude for life trumps all obstacles we have faced at this moment. We feel so fortunate he’s alive. As does he,” she wrote.

I am sad to say that last week Lindsey underwent emergency open heart surgery. He is now recuperating at home and each day he is stronger than the last. While he and his heart are doing well, the surgery resulted in vocal cord damage. While it is is unclear if this damage is permanent, we are hopeful it is not. This past year has been a very stressful and difficult year for our family to say the least. But despite all this, our gratitude for life trumps all obstacles we have faced at this moment. We feel so fortunate he’s alive. As does he. He looks forward to recovery and putting this behind him. Needless to say, all touring and shows currently scheduled have been put on pause for the moment as he gathers the strength to heal completely. Our family thought it important to share what’s happening with Lindsey with the hope that inspires someone else to seek preventative care. Lindsey’s family has a history of heart issues, having lost both his father at 56 and his brother at 46 to heart related illness. If anyone is experiencing even the mildest of symptoms we encourage you to seek the care of a physician. We are so thankful for the kind and generous love given by the people surrounding Lindsey, me and our kids throughout this emotional time. We can’t thank you enough for all you did for our family. We will never forget you. XO ❤️

The band, meanwhile, has offered its condolences publicly via Twitter.

We are saddened by this news. Our thoughts and love go out to Lindsey and his entire family. We are hopeful for his speedy recovery.

Fleetwood Mac were like a family for Lindsey, and their separation was a difficult time for the guitarist.

The band announced that they were letting Lindsey go on April 9, 2018.

“Lindsey Buckingham will not be performing with the band on this tour. The band wishes Lindsey all the best,” they said in a statement.

“I have sadly taken leave of my band of 43 years, Fleetwood Mac,” Lindsay later said during a fundraiser performance in Los Feliz, California, according to Billboard. “This was not something that was really my doing or my choice.”

But the guitarist also said he was looking forward to other projects he could dive into.

“Am I heartbroken about not doing another tour with Fleetwood Mac? No, because I can see that there are many other areas to look into,” he said.

And that’s exactly what he did. The former Fleetwood Mac guitarist has since been working and completing his own solo album. Tentatively named “Blue Light”, the anticipated album is set for release in 2019.

You can watch him in action below.

It was a pleasure performing songs from the #SoloAnthology for @CBSThisMorning's #SundaySessions. Watch the full video at the link in bio.

Share to wish Lindsey a speedy recovery and the best of luck with all his future endeavors!