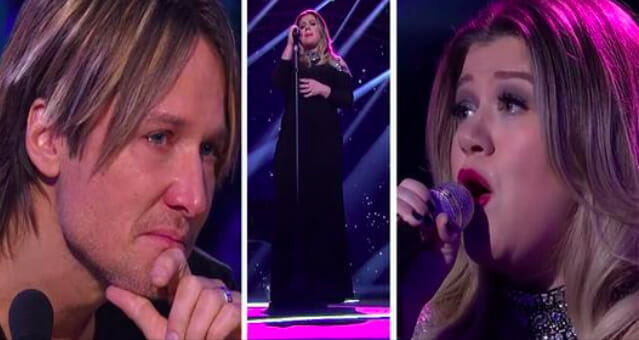 The first time we saw Kelly Clarkson, we knew we were looking at a star. The incredibly talented young woman has proven time and time again that not only can she hit those high notes with her powerful voice, she can fill them with intense emotion sourced directly from her heart.

Perhaps nothing reveals that more adequately than when the natural born star performed her hit “Piece by Piece” on popular TV talent show, American Idol.

By this time, Kelly Clarkson’s name is already on the lips of thousands across the country. The 36-year-old proved to the world just how much emotion she could transmit through a song by bringing the entire audience to tears.

The previous American idol winner, now pregnant, returned to the stage and performed her emotional hit song, “Piece by Piece”. She sang it so deep from her heart that she caused tears to start streaming down jury member Keith Urban’s cheeks.

There wasn’t a dry eye in the room.

Kelly Clarkson is known to be able to transmit emotion through her voice in a way not any singer can. She certainly proved it on this day, as she sang her hit song, which is based on her own personal experience, for the crowd.

Watch her unbelievably emotional performance in the video below.

I have so much respect for singers that sing directly from their hearts and cried my eyes out when I watched Kelly Clarkson’s performance. Share if this moved you to your core, too.