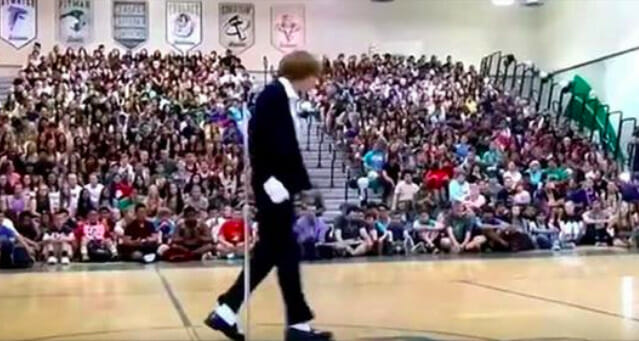 Performing in front of a crowded audience can make anyone nervous. This is especially true if you’re a teenager, when we’re most shy and feeling rather insecure about how others see us.

But if you manage to gather the courage to do just this, then it can be a most amazing, thrilling experience.

That is exactly what happened for Brett Nichols, when he decided to participate in his school’s talent show.

Pitman High School in Turlock, California, had a full house this day. Its gymnasium was packed with anticipating students, and, naturally, with hundred of eyes on him, Brett Nichol looked a bit nervous as he stepped onto center stage.

But as soon as Brett warms up, everything changes. He soon melts into his element and begins showing off his amazing skills in front of the the whole school!

As Michael Jackson’s classic “Billy Jean” starts, Brett transforms into a real superstar. He enters into his new role in full swing, skillfully dancing and spinning around — his brilliant imitation of the rock idol quickly prompting the audience into loud cheers.

But Brett also won the jury’s hearts, earning first place in the talent show. The video has since been spreading like wildfire online and the teen became an internet sensation overnight.

It’s so wonderful to see how Brett had the courage to audition — here’s one young man with real talent. Watch his performance in the video below — and be sure to do so until the end, as Brett offers an iconic move to the audience’s great delight!

Although Michael Jackson is no longer with us today, his legacy certainly lives on in our lives and hearts. This can clearly be seen through Brett’s passionate performance.