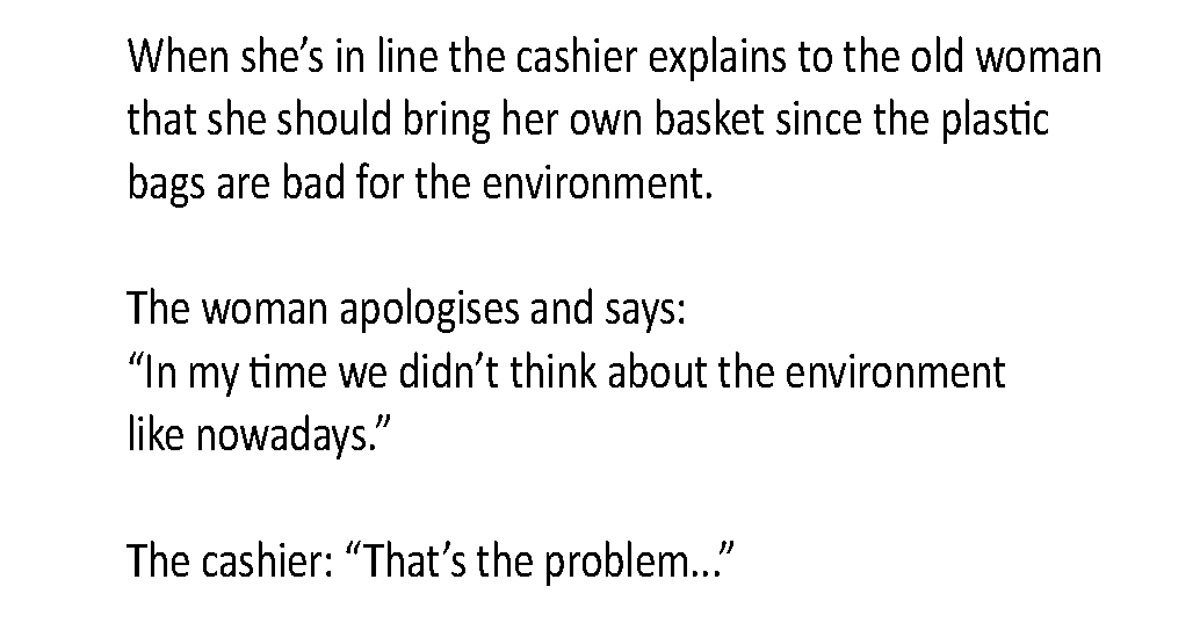 Who do you think is responsible for the existing issues with the environment? Some people would claim that the older generation should be blamed and that they didn’t do enough to encounter the climate changes and environmental pollution. I don’t know if this story is true. It circulates around the web in different versions. But I still think it got something and that’s why I want to share it with you. Read and please share!

Everything starts with this old lady who stands in line about to buy some groceries. The cashier takes the opportunity explaining to the woman that she should bring her own shopping basket instead of buying plastic bags because it’s bad for the environment.

The old lady apologises and explains to him that “in our time we didn’t think the same way”.

The cashier answers: “That’s the problem nowadays. Your generation didn’t think about the environment”.

Well, the woman was right. Her generation didn’t actually have any thoughts about the environment back in the day.

Back then, you just returned your milk and beer bottles to the grocery store. They sent them back to a facility who cleaned and sanitized the bottles who later were refilled over and over again. But hey, for sure they didn’t have the environment in mind.

Years back you took the stairs because there was no escalator in every street corner. You walked two blocks to get to the grocery store instead of taking the car with a huge amount of horsepower. But the cashier was right, they didn’t think about the environment back then.

When the old woman was young she washed the diapers since there were no diapers that you just throwed away after they were used. Their washed clothes dried outside in the sun, not in a tumble-drier that swallows energy. The kids clothes were heritage from their siblings. New clothes? Not really.

But hey, for sure they didn’t think about the environment back then.

Back then, they maybe had one television or one radio in the house. Not a flat screen TV in every room. In the kitchen, they cooked with their bare hands and didn’t use electronic devices like a blender. If you wanted to send a package with the mail you had to embed it with old newspapers – not with styrofoam or bubble plastic.

They didn’t use a gas driven machine to cut the grass. They used a hand driven lawn mower and had to trim the front yard with human power. A lot of people got their workout through work. They didn’t join a gym to burn calories on a treadmill that swallows energy.

They drank water from a fountain when they were thirsty instead of buying a plastic bottle. They filled their pens with ink instead of buying new ones. They sharpened their razor blades instead of throwing it away when it was used too many times.

But hey, for sure they didn’t think about the environment back then.

Back then they took the tram or the bus. The kids took the bike or walked to school instead of letting their mothers operate as a taxi driver 24/7. There was one wall outlet in one room. Not loads of them to run a dozen machines. You were not depending on a cellphone, that’s receiving a signal from satellites in space, when you want to find a pizzeria nearby.

But the old lady was right. They didn’t think about the environment back then… Or?

Isn’t sad how the young generation thinks that are ancestors are the reason to today’s environmental problems?