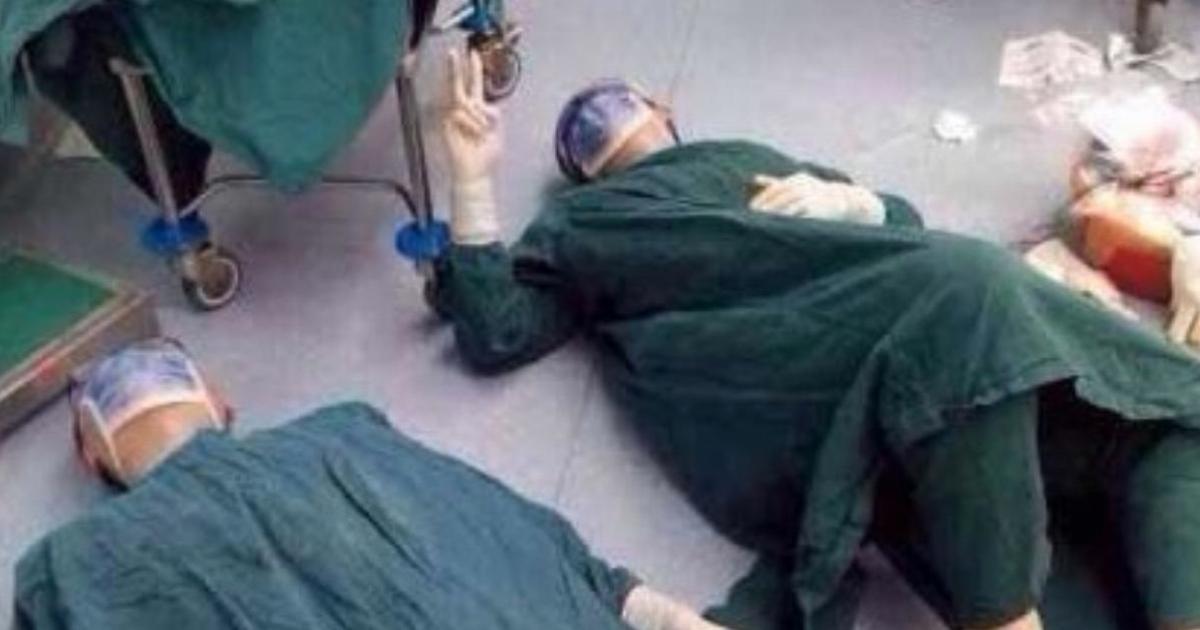 The history of medicine includes doctors and surgeons like the amazing James Barry, the British woman who disguised herself as a man and changed the face of medicine in the 19th century.

And today there are countless skilled doctors around the world working hard day and night to save lives.

A moving example of this can be seen in a picture from a hospital in the Chinese province of Fujian.

The picture, which has gone viral, shows three exhausted surgeons lying on the floor after they completed a 32-hour surgery.

The operation involved three surgeons, six anesthesiologists, and eight nurses. Together they performed six separate operations to remove a series of brain tumors from a single patient.

From Saturday morning at 8:30 a.m. until Sunday, surgeons worked with great patience at the operating table.

According to the Chinese newspaper the Global Times, this was the longest operation ever undertaken at Fujian Medical University Union Hospital.

One of the surgeons, Dr. Chen Jianping, said about the surgery, “The patient had both an aneurysm and brain-stem hemangioblastoma. We needed to remove both tumors in one surgery. This required six different surgical procedures to be conducted on the patient. It can be difficult, risky, and time-consuming. If you are removing one tumor, and the other one breaks, it can be fatal.”

During the operation, the doctors took only short breaks, and even the patient’s family worried whether the surgeons could handle the physical strain.

But it all turned out well in the end. In the image above, taken shortly after the surgery was completed, one of the surgeons to seen making a V-sign for “victory.”

The picture went viral in China, but Chen Jianping was hesitant to take too much credit.

“It isn’t only me who works hard to treat patients. There so many surgeons just like me who are not seen,” said Chen Jianping.

As Chen Jianping says, there are more medical heroes who deserve to be praised.

The picture below, which became world famous in 1987 (National Geographic chose it as its picture of the year), shows Polish heart surgeon Dr. Zbigniew Religa.

The operation lasted 23 hours. In this picture, Zbigniew Religa is seen monitoring the patient’s vital signs, while one of his exhausted colleagues sleeps in the right corner.

It was the first heart transplant ever conducted in Poland, and it was successful. Dr. Religa passed away in 2007, but Tadeusz Żytkiewicz is still alive today.

Isn’t it amazing to see how far doctors and surgeons are prepared to go to save human lives?

Please help share these images on Facebook so that more people can pay tribute to all the talented doctors and surgeons out there!