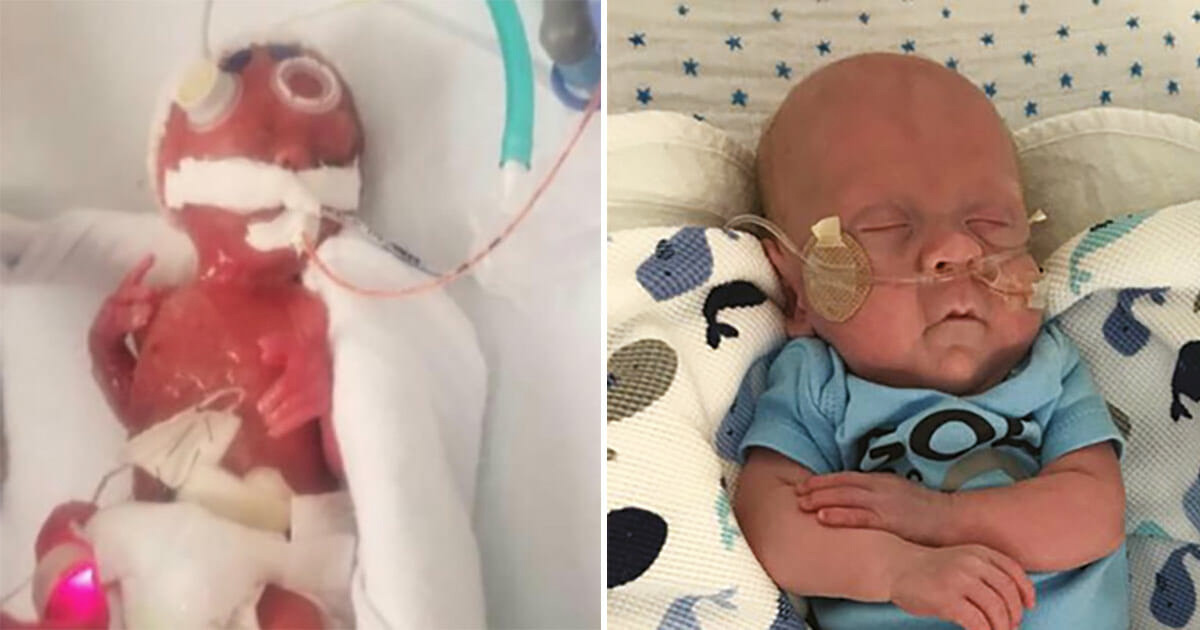 Cullen Potter was born almost five months premature. No one thought he would survive. But five months later, he left the intensive care unit and today he is a perfectly healthy 2-year-old boy.

Molli Potter was only 22 weeks pregnant when her son Cullen decided to come into this world on March 14, 2018, in Pensacola, Florida.

Doctors didn’t want to operate on him

At 22 weeks a baby is not full developed, and according to the doctors, the operations Cullen needed would be extremely painful and risky. Due to the risks, they weren’t recommended.

The statistics show that almost no child born at 22 weeks or less survives, and if they do, they will have disabilities and will need monitoring.

Molly and her partner were devastated, but they were not ready to give up. They went to 15 hospitals, but they always got the same message – the risks are too big.

There was a hospital willing to dare

But in the end, the rescue arrived. The USA Children’s and Women’s Hospital in Mobile, Alabama, was willing to perform the operations.

“Even if it’s 21 weeks and six days, we will be here, and we will always fight for a chance in life,” said Dr. Fabien Eyal, who treated Cullen.

The numbers were not on Cullen’s side, but his family would not give up. While there is life, there is hope, at least for this family.

They had to go through a lot of struggle. Molly had to see her son intubated, suffer, and go to the operating room several times. But they always had the support of the doctors and nurses, especially one nurse, Jules Barber.

“We could not have done this without her,” the family told Good Morning America.

Jules had beautiful words for the family:

They are an amazing family. Their story is awesome. Just to know that Robert had to call 16 different hospitals before they found us… The trouble they went through, the perseverance to get him here (…) To see the bond that they had with their child…. it just very special. They will always have a bond with me, and I love him very much. They are a very special family and they are very dear to me.

The hospital was a second house for the family, and the only home Cullen had for months.

Cullen graduated after 5 months at the hospital

After five long months of treatment and care, a healthy baby was finally ready to go home.

The day Cullen left the hospital, Jules had a very special surprise ready for the family.

Cullen was not only leaving the hospital, he was graduating!

Jules found the little graduation clothes for baby Cullen and she carried him through the hospital corridors all the way out.

Cullen got the best parents who never gave up, and the best big brother who is very proud of him.

It’s been 2 years since Cullen’s amazing journey started, and he is now a happy and healthy boy.

This is a fantastic story that brings hope. Feel free to share the article to spread Cullen’s story and wish him the best to this beautiful family.