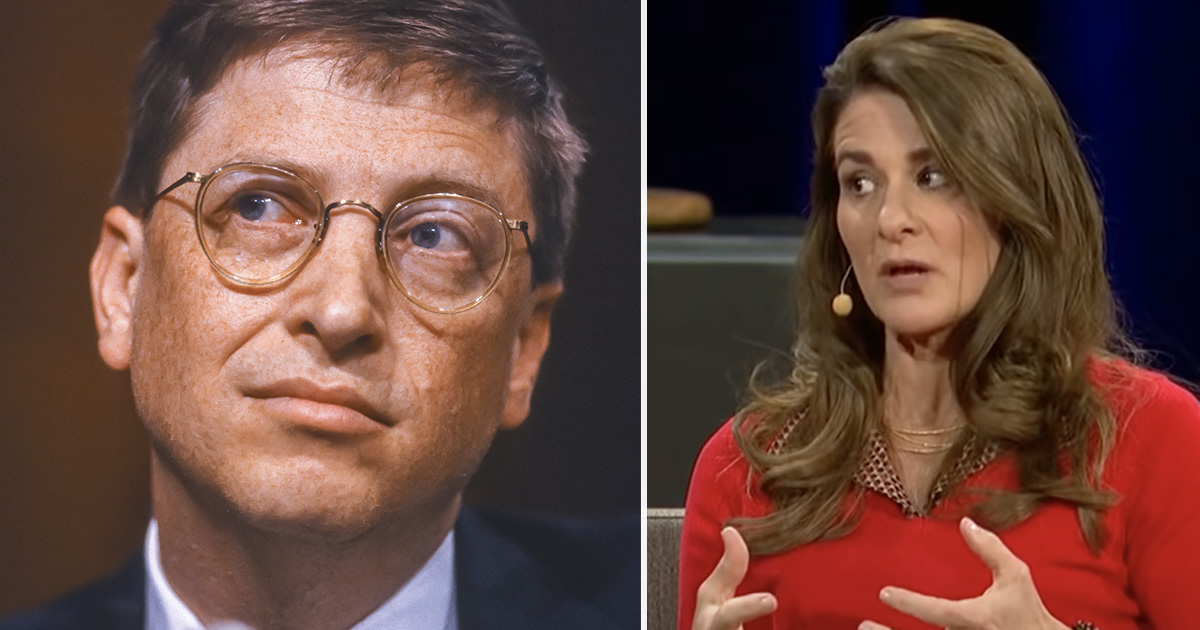 Bill and Melinda Gates have announced their divorce after 27 years of marriage. The couple met while working on Microsoft, and since then they’ve created both a business empire as well as a large family.

Now, Bill and Melinda are going their separate ways, but not until the divorce is finalized. That means assets are going to be divided between the two of them, – details of which seem to be of great interest to the world. In fact, there’s already one that has come to light.

According to the divorce filing, the couple have a “separation agreement” – but not a prenup.

Money can certainly make things easier in life. However, it’s never going to be the one thing that truly makes you happy. Sure, money can buy you a nice house, a fancy car, and new clothes. But when it comes to relationships, friends, experiences and life lessons? Well, it simply doesn’t help as much.

If there’s one thing that money can’t buy, it’s love. Love is something that simply can’t be explained or replaced – and maybe that’s what makes it so wonderful to experience.

If you were to ask Bill Gates and his soon to be ex-wife Melinda, money probably made things easier for them. After all, they became one of the world’s most wealthy couples during the rise of Microsoft.

Even so, they’ve never really been the type of show off with a flamboyant, luxurious lifestyle.

Bill and Melinda have raised a wonderful family of three children, all of whom are now grown up.

Earlier this week, though, they shared a statement revealing they are getting divorced following 27-years of marriage.

Sometimes, couples can realize that the spark isn’t there anymore, and that they’ve fallen out of love. When this happens – though difficult – it’s usually best that a pair go their separate ways. To that end, we wish Bill and Melinda all the happiness in the future, and hope that they feel comfortable in this decision.

So how did Melinda and Bill Gates meet in the first place? Let’s take a look back at their love story – which started way back in the 1980s.

When the couple met, Bill Gates had already built Microsoft from the bottom up, creating a billion dollar company. They had created software from IBM, and by 1983, Microsoft was a global company with offices in Great Britain and Japan.

At the time, it was estimated that some 30 percent of the world’s computers ran on Microsoft’s software.

One could say that Bill Gates was a wonder child from the beginning, and he really was. After graduating from Seattle’s exclusive preparatory Lakeside School in 1973, Bill scored 1590 out of 1600 on the college SAT test. Later on, he even dropped out of Harvard to focus on his Microsoft business.

Bill Gates became a millionaire at age 31, and in 1987, he became a billionaire when the Microsoft stock hit $90.75 a share.

But 1987 also held something of more significance for him: it was the year he met Melinda French, who had recently started working at Microsoft.

“She had other boyfriends, and I had Microsoft,” Bill said in the Netflix miniseries Inside Bill’s Brain. “We were like, ‘Hey we are not really serious about each other, are we? We are not going to demand each other’s time.'”

Beat him in puzzle competition

Melinda added: “I was new to Microsoft, there were a lot of men there and you are still looking around.”

The couple’s romance started when they met and talked at a dinner party in New York City. Soon after, she beat him at puzzle competitions, which pretty much took things to a new level.

In her 2019 memoir The Moment of Lift: How Empowering Women Changes the World, Melinda Gates recalled that the couple “talked over dinner” that evening. Days later, Bill asked her out while standing in the parking lot.

“He struck up a conversation and asked me out two weeks from Friday,” she wrote. “I laughed and said: ‘That’s not spontaneous enough for me. Ask me out closer to the date’ and gave him my number.

“I think he got intrigued when I beat him at a math game and won the first time at Clue, the board game where you figure out who did the murder in what room with what weapon.”

So, Bill and Melinda started dating. About a year later, Melinda blurted out the fateful words.

“…sort of to our surprise, certainly my surprise, we said, ‘Hey, I love you.'” Bill said. “And she said she loved me and then it was like, ‘Wow, and now what is going to happen?'”

The romance turned into a relationship, and soon, Bill Gates wanted to make a very big decision. The Microsoft founder actually made a pro/con list in their bedroom for wether or not he was going to ask Melinda to marry him.

“His whiteboard had the pros and the cons of getting married,” she recalled.

Ultimately, it wasn’t a tough decision for Bill Gates. He soon asked Melinda to marry him, and in 1994, the couple tied knot in Lanai, Hawaii. At the time, Gates was 38, and Melinda 29.

“When I get really enthusiastic about something, I count on her to make sure I’m being realistic,” Bill added. “She helps me understand when I can push our teams harder (as I pretty much always did at Microsoft) and when I need to ease off.”

With both working pretty much 24/7, as well as raising a family, Bill and Melinda Gates have used the word “empathy” to describe their marriage.

“I love Bill because he has a kind heart, listens to other people, and lets himself be moved by what they say,” Melinda wrote. “When I tell a story about what I’ve seen, he feels it. He might ask me to gather some data for good measure, but he doesn’t doubt the reality of my experiences or the soundness of my judgment.”

Besides running a very successful business, Melinda and Bill have worked together for years running their charitable organization, the Bill & Melinda Gates Foundation.  It launched in 1994, and focuses on global health, education, and support for at-risk families, as well as access to digital information via public libraries. Now, it has grown into one of the world’s largest private charitable foundations.

“Working together as well as raising a family together, there’s a certain intensity to that. But we’re very lucky because we mostly see things the same way, the goals are very much the same,” Bill Gates said in a 2019 Facebook Live.

Named “Time’s Persons of the Year”

Melinda Gates left Microsoft after nine years, and instead fully focused on their charity foundation. Gates praised his then-wife for helping him with the work load of running Microsoft. Melinda, meanwhile, made sure to let people know that they are very equal.

Bill Gates and Melinda are known to be very fond of helping others, both within and outside of their foundation. In 2005, the couple was named “Time’s Persons of The Year” together with U2 singer Bono.

“We realize that we’ve been extremely fortunate in business, and we want to give back in ways that can do the most good for the most people,” they said in a statement at the time of the recognition.

“But we also believe that everyone has something to offer — time, money, or energy — that can help others.”

As recently as 2019, when Melinda Gates released her book, it looked like things were going very smoothly between the two. However, on May 3, 2021, Melinda and Bill Gates filed for divorce.

Melinda wrote that the marriage was “irretrievably broke”” when providing a reason for the divorce, this according to the filing obtained by TMZ.

“After a great deal of thought and a lot of work on our relationship, we have made the decision to end our marriage,” Bill and Melinda said in a shared statement.

“Over the last 27 years, we have raised three incredible children and built a foundation that works all over the world to enable all people to lead healthy, productive lives.

“We continue to share a believer in that mission and will continue our work together at the foundation, but we no longer believe we can grow together as a couple in this next phase of our lives.”

For many people, this probably came as a big shock. But remember, the most important part is that everyone’s happy, and hopefully, Melinda and Bill can move forward as a family, even though they won’t be married anymore.

“It’s been a challenging stretch of time for our whole family,” she wrote in an Instagram Story, as quoted by US Magazine.

“I’m still learning how to best support my own process and emotions as well as family members at this time, and am grateful for the space to do so. I won’t personally comment further on anything around the separation, but please know that your kind words and support mean the world to me.”

The petition for the divorce between Bill and Melinda was filed Monday in King County Superior Court in Seattle, Washington. On that note, an interesting detail has come to light. The notes in the filing say the couple have a “separation agreement”. However, as reported by Business Insider, there is no prenup.

The separation agreement is usually signed by the two parties at the end of the marriage. Therefore, this will lay out the terms of Bill and Melinda Gates’ split. Details of their contract wasn’t included in the filing of the divorce, but it will most likely show how they are to divide the assets, according to NY Post.

A separation agreement lists all Bill and Melinda’s rights, as well as obligations, including things such as child support and custody. This type of document is signed between them, and doesn’t involve the court.

In the divorce filings, Bill and Melinda Gates asked for their real property, personal property, as well as debts, to be split according to their separation contract, per reports.

It’s easy to predict that Melinda Gates won’t be needing any spouse support however. The Gates family’s net worth is estimated to be more than $150 billion, so both parties will probably be pretty content with the outcome, even though a divorce never is a fun thing to experience.

We really hope that Melinda and Bill Gates can have a peaceful divorce. And of course, we wish them all the best in the future!

Please, share this article with friends and family to honor the work of Bill and Melinda Gates!