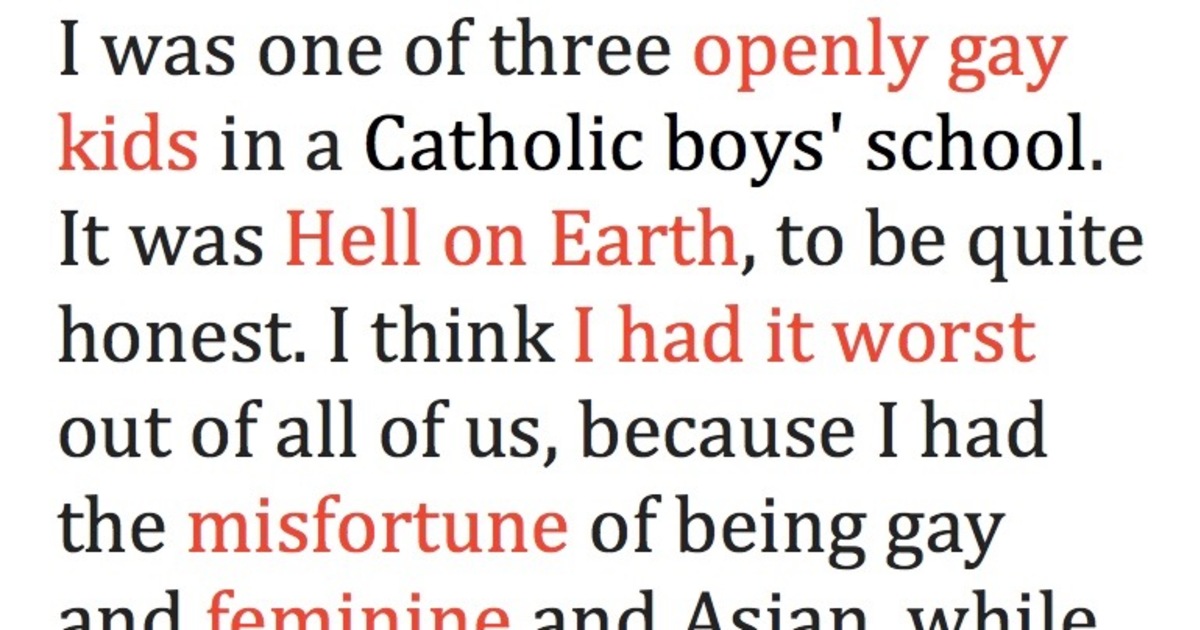 This story was originally shared on the social news site Reddit by one of the page’s readers. It’s quite heavy to read and it concerns one of the absolute worst things there is: bullying. The guy who wrote the story is gay and suffered greatly for it. It went so far that he was abused by some of his high school schoolmates, who weren’t exactly happy about his sexual orientation. It makes me furious to have to read what the guy had to suffer through. But thankfully, he found a way to show everyone, including his bullies, a profound lesson that they’ll never forget. Read his story below and share it with your friends if you’re also rooting for this guy and think he did the right thing!

“So I was one of maybe three openly gay kids in a Catholic boys’ school. It was Hell on Earth, to be quite honest. I think I had it worst out of all of us, because I had the misfortune of being gay and feminine and Asian, while the other two were white and athletic. I got bullied pretty badly, and it culminated in an incident where someone asked me out and when I went to meet him after school, he was there with his friends. They beat me up, and urinated on me, and they held me down and cut off my hair.

My parents were furious and took it to the school administration, and a couple of boys received suspensions, but nothing substantial was ever done.

Some weeks later, I discovered that the attack had been filmed and was being circulated among the school. I got a copy off one of my friends. It was pretty harrowing to watch, but the important thing was that most of the boys’ faces were clearly recognisable, and several of their voices as well.

Now I don’t know how things work in Exotic Amerikay far across the sea or wherever you may be from, but here in Australia, we have a big end-of-year assembly to say goodbye to the graduating class and give out awards for academic excellence. There are musical performances and such for the school’s talent to show themselves off, and all sorts of lovely things. There’s often also a sort of home video type thing that’s put together by the graduating class to say goodbye, usually to some disgustingly schmaltzy popular song about farewells and memories.

This year, the tech guys in the projector room above the auditorium were my intimate friends. Nobody wanted the job because everyone wanted to be down in the auditorium, graduating with everyone else, but up there they got an unlimited supply of sandwiches from the catering department and could relax while everyone else sweated in their ugly robes. And they could swap out the graduation farewell video with the video of me getting attacked.

The video started playing almost as soon as everyone had received their diplomas and awards for academic excellence. Projected twenty feet tall, the audio blaring from the auditorium’s excellent audio system, my friends replayed the footage of the violent and humiliating homophobic attack that I’d been subjected to six months earlier for everyone to see—students, teachers, parents. I swear I never saw those teachers move so fast as they did when they were rushing to the auditorium, but the video had already replayed twice by the time it was stopped.

There was an inquiry. Nobody lost their jobs or got kicked out of school, sadly, but the school was forced to implement a strict anti-bullying program and its reputation was irreparably damaged. It closed down a couple of years later—apparently, it had lost millions in a lawsuit by another student it hadn’t done enough to protect—and each of those five boys who attacked me had to live with the fact that their parents and grandparents and aunties and friends all knew with perfect clarity just what kind of creatures they were.

The school did try to discipline me and my friends up in the auditorium, but by that point we had our diplomas and had finished our final exams and there was nothing to be done.

Do you also think he was incredibly brave for doing what he did? Share if you agree!