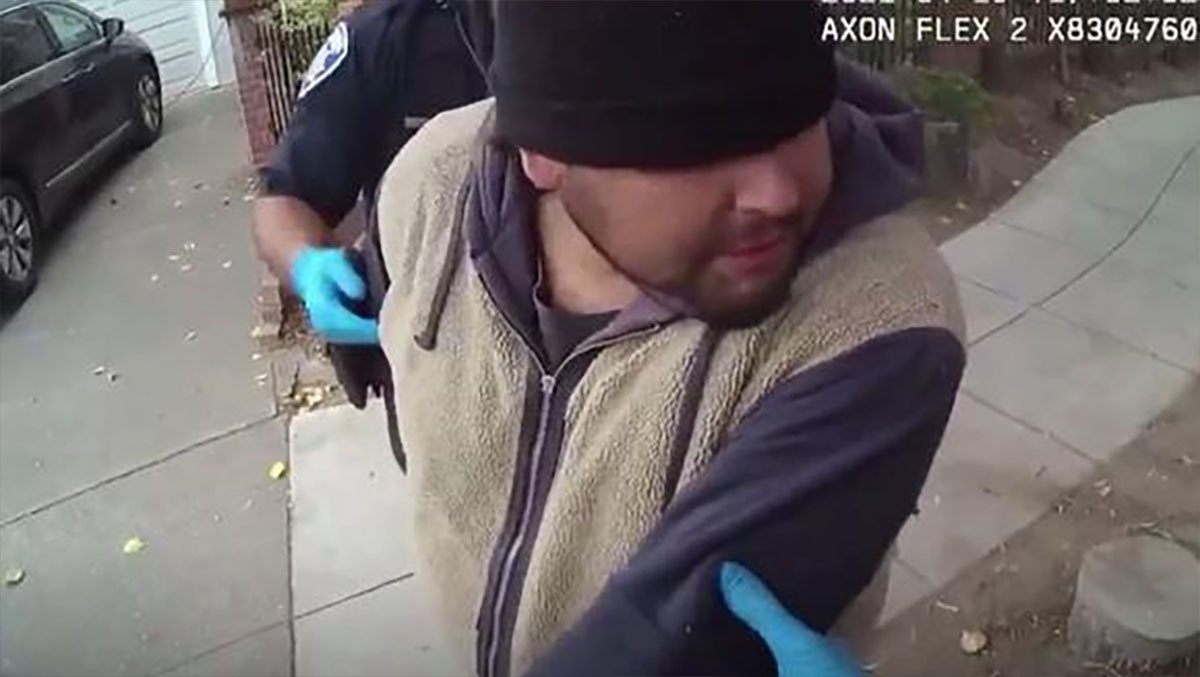 The family of a man who died after being pinned to the ground by officers for five minutes is demanding an investigation.

Mario Arenales Gonzalez died in the custody of Alameda Police, in northern California on April 19 following a “scuffle” with officers after which he suffered “a medical emergency,” according to a press release from the city of Alameda, California.

After the death of the 26-year-old body camera footage was released of the arrest of the Oakland resident showing the moment he became unresponsive while two police officers were pinning him to the ground with his arms handcuffed behind his back.

In the distressing video you can hear Mario struggling to breathe while officers tell him he’s okay and then ask him when his birthday is. The video, which has been posted on YouTube has attracted more than 2,400 angry comments from people.

Officers were called to reports of a man not wearing a mask and talking to himself. They arrive to find Gonzalez standing next to two baskets of bottles and start questioning him about drinking in the park.

When they ask for his ID and he can’t provide it, they tell him they’re going to have to take him in. They ask him several times to put his hands behind his back so they can handcuff him. During a struggle in which Mario says “stop, stop, stop,” the officers pin him to the ground and handcuff him.

Mario’s family members watched the video before it was publicly released and said what they saw does not tie in with the account given by police and are calling his death a murder.

“My mother was heartbroken to see Mario’s last moment. She gave birth to him, her firstborn, raised him, and now has to bury him. It was painful to watch the violence and disregard for his humanity,” said Mario’s brother Gerardo as per the East Bay Times.

“The footage shows officers on top of Mario while he was face down on the ground. They had their weight on his head and his back.

“He was complying and they continued to pin him down with their weight. Everything we saw in that video was unnecessary and unprofessional. And it took a minuscule event and made it fatal.”

His mother said: “The footage shows what we already knew. Mario was a kind man and level headed. There was a way to deal with this situation without killing my son.”

Mario’s family are now calling for the three officers involved in the incident to be fired and face prosecution.

The officers involved have been identified as James Fisher, Eric McKinley and Cameron Leahy. All three have been placed on administrative leave.

An autopsy has been carried out by the Alameda County coroner’s office, however an official cause of death has yet to be released.

Interim Police Chief Randy Fenn added: “The protection of human life is our primary duty as police officers. The loss of Mr. Gonzalez is a terrible tragedy and our thoughts and prayers go out to his loved ones.”

The video below contains disturbing scenes.

My heart goes out to Mario’s loved ones; such a tragedy that really didn’t need to happen. Rest in peace Mario.

I hope a thorough investigation is carried out and ultimately officers get more training when dealing with people who are already suffering.