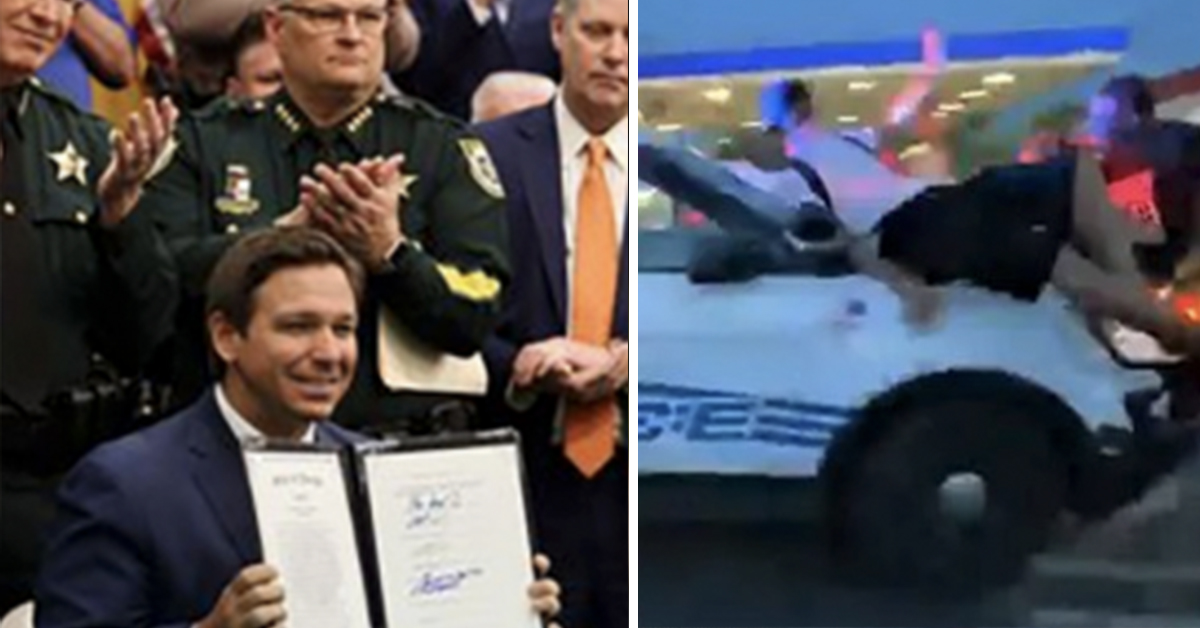 The legislation, nicknamed the “anti-riot bill,” will give police extra protection and increase penalties for those who riot, which is defined in this new bill as a “violent public disturbance involving 3 or more people.”

The law also increases penalties for protesters who block roadways or deface public monuments. And it requires that anyone arrested at a protest be denied bail until their first court appearance, resulting in more overnight jail stays.

Perhaps more disturbing is that civil immunity is now given to anyone who runs over a protester if they are in or blocking the road. Democrats argued this could have protected the white nationalist who ran over and killed counter-protester Heather Heyer in Charlottesville. It also makes blocking a highway a felony offense.

Florida Governor DeSantis signed HB 1 at a press conference making the law effective immediately. He didn’t take any questions after the signing.

“It is the strongest anti-rioting, pro-law enforcement piece of legislation in the country and there’s just nothing even close,” DeSantis said at the Monday morning press conference before signing the bill.

“If you riot, if you loot, if you harm others, particularly if you harm a law enforcement officer, during one of these violent assemblies, you’re going to jail. We’re going to hold you accountable and we’re not going to end up like Portland (Oregon), where this is just a daily occurrence for these people who are doing this. They get arrested, they got their mug shot taken and then they get right back on the street to do it again.”

Democratic state Sen. Shevrin Jones, who is Black, said the new law “undermines every Floridian’s constitutional rights, and it is disgusting that the GOP would rather empower vigilantes and silence voices than listen to the majority of Floridians who oppose this dangerous bill.

“The governor’s spectacle is a distraction that will only further disenfranchise Black and brown communities,” he added, as per the Orlando Sentinel.

“It makes no effort to heighten penalties for driving cars into protesters, rather it shields violent counter-protesters from civil liability if they injure or kill a protester or demonstrator,” said Mikah Kubic, executive director of the of the ACLU, as per the Ledger.

“The bill also protects shrines to white supremacy with enhanced charges for damaging Confederate monuments or the Confederate flag.”

Local governments will also be held accountable and punished if they’re seen to be preventing the termination of a ‘riot’. The law also prohibits defacing, injuring or damaging a memorial or historic property, including flags as well an ability to file objections to funding cuts, which feeds into his stance against calls for police reform.

What do you think of this new legislation? Please post your comments below and share this story.