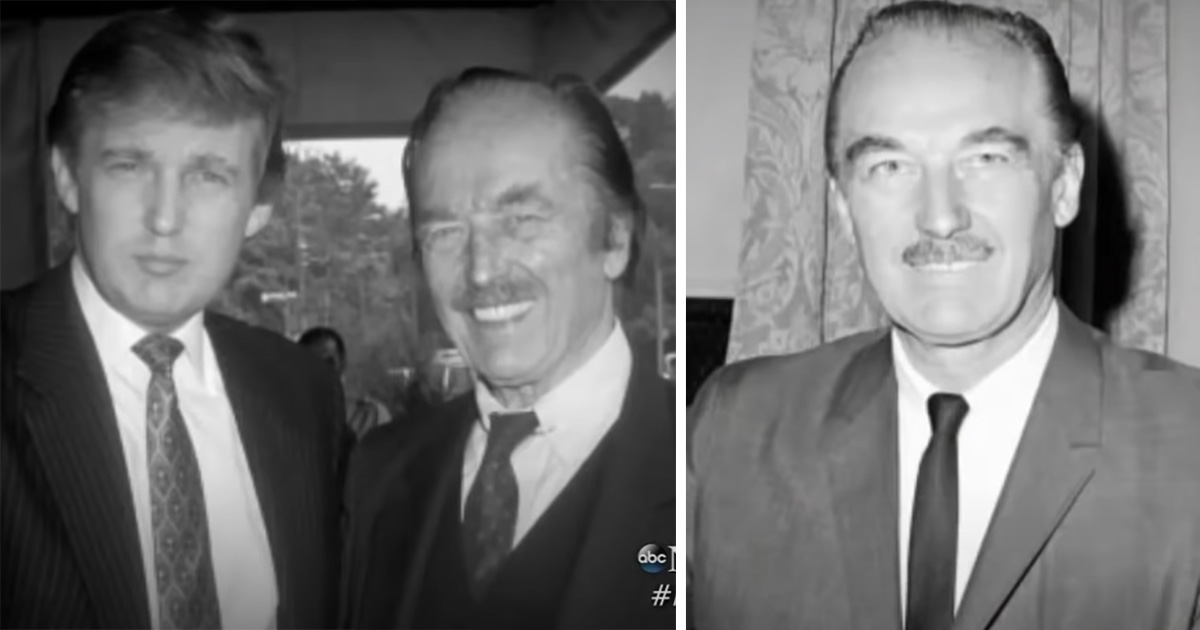 Donald Trump inherited a powerful real estate company from his father Fred Trump. The former president’s dad was one of New York City’s major post-war builders, and passed away in 1999.

But who was he? Well, Fred Trump did plenty for his community, building thousands of homes for the middle class in Brooklyn and Queens (and getting extremely wealthy by doing it). Yet at the same time as Fred was climbing to the very top of society, he also carried a secret with him. One which, according to him, was vital for his success.

This is the story of Donald Trump’s father.

It’s always easy to say that Donald Trump was handed everything and didn’t have to work to build his empire. Well, the truth is that in the last 15-20 years alone, the former president – along with his son Eric, amongst others – has widely expanded the Trump Organization. These days, it includes golf resorts, hotels and even casinos all around the U.S..

In the beginning, though, it wasn’t all about huge skyscrapers in Manhattan.

When Donald Trump’s father, Fred, started his real estate and construction business, he focused on the middle class, building thousands and thousands of houses around the city.

Without Fred Trump, Donald probably wouldn’t have had the foundations for such a successful career. But really, who was his father?

Here’s all you need to know about Fred Trump’s life.

Many things surrounding Fred Trump seemed strange to the outside world. Later in life, he explained exactly why that was.

In the very beginning, Fred Trump’s parents were actually immigrants. His father, Frederick Trump, arrived in the U.S. in 1885 from Kallstadt, Germany to join the Alaska gold rush. He was pursuing the American dream, and by the end of the century, he had gotten himself a restaurant in the Yukon Territory called the White Horse Restaurant and Inn. He also supplied food and lumber to the people working in the mines.

In 1902, Frederick headed back to Germany to marry his neighbor Elizabeth Christ. They decided to move to the U.S., and settled in a single-family house in Woodhaven, Queens.

As a young kid, Fred Trump became interested in construction. Sadly, around the same time, tragedy struck the family. His father passed away when he was only 11, and Fred started to take jobs to help provide for the family.

“When I was a lad I discovered that I was agile with my hands, that I could take pieces of wood and nail them together, and that it was a lot of fun,” Fred Trump said in a 1973 interview with The New York Times.

“When I was 16, I built a garage for a neighbor, probably not the greatest garage ever put up, but the experience reinforced my hope of doing something creative with wood and bricks and cement.”

Fred Trump graduated from Richmond Hill High School in 1923, and already by that point, the Trump empire started to modestly take form.

He took a job as a horse’s helper, but by night, he took classes in building construction at the Young Men’s Christian Association. Just a year later, in 1924, Fred Trump had built his first one-family home.

In the couple of years that followed, he built several more homes in Queens, but since he wasn’t 21, his mother got the checks.

“In those days I could build and sell a house for about $7,500,” Fred Trump recalled.

Trump had started his own construction business, and while building the new homes, he did something very clever. Since the invention of cars was proving to be very popular, Fred decided to build garages as well. It was a success, and together with his mother, Elizabeth, they formed the company E. Trump & Son.

Fred Trump wanted more, but even though he was making money, he had to make sure that his family was taken care of. He managed to send his younger brother John to Brooklyn Polytechnic Institute, and later Columbia for his master’s degree. In the end, John also got his Ph.D at the Massachusetts Institute of Technology, and from that point, it looked like it was meant to be that the brothers would go into business with each other.

However, it turned out that John and Fred didn’t really have the same philosophy when it came to the construction part.

‘They laughed about it together later,” their nephew told the New York Times. ”John designed the house, and before it was finished, Fred wanted to sell it; you know, that’s what you do when you’re in real estate. But John was a scientist; he wanted to wait until it was totally done. After about a year, my uncle John switched to electrical engineering.”

In the late 1920s, Trump built more and more single-family houses in Queens and sold them for an average of around $4,000 each. He also built “Trump Market” – a new concept of which was supermarkets – in the middle of the depression. It was a smash-hit, and a year later he sold it to another chain.

There seemed like there always was something going on, which helped Fred Trump to expand his business. Then, suddenly, World War II happened, and Fred turned to building barracks and apartments for the Navy.

At this point in his career, however, Fred Trump began lying about his family heritage. Since his father was from Germany, he was worried that his German ancestry would hurt his businesses, especially considering his many Jewish tenants. Instead, Fred told his tenants, partners and associates that his family came from Sweden.

Also, according to the biography The Trumps: Three Generations that Built an Empire, Fred Trump denied knowing German and didn’t teach it to his children.

“He said, ‘You don’t sell apartments after the war if you’re German,'” Kohn Walter, a Trump family historian and one of Donald Trump’s cousins, told the Boston Globe. “So he’s Swedish, no problem.”

This lie about his German heritage actually became his son’s lie as well. It wasn’t until later that both Fred and Donald Trump acknowledged their German heritage.

In his book, The Art of the Deal, Donald Trump once again claimed that his grandfather came to America “from Sweden as a child”. However, in a video message at the annual German-American Steuben Parade in New York City in 1999, the former president accepted he has a German heritage.

“We passed Trump Tower, 69 stories. I looked up and I said, ‘This is a long way from Kallstadt’, I’m a proud German-American,” Donald Trump said.

When the Second World War was finally over – and the soldiers, medics and other returning servicemen and their families came home – there was a huge demand for housing.

In 1949, Trump then started his journey in constructing middle-income housing in Bensonhurst, as well as Beach Haven – near Coney Island – with 2,700 apartments. In the 1960s, things really took off.

‘”He made a great contribution; he filled a very big hole in the market,'” the real estate tycoon Samuel J. LeFrak recalled.

“We took Queens, he did more in Brooklyn. He was a great builder who rallied to the cause like we did, he built housing for the returning veterans. I guess you could say we’re the last of the old dinosaurs.'”

By this point, Fred wasn’t alone. He had met the love of his life, Mary Anne MacLeod, in the early 1930s, and just a few years later, the two tied the knot. They had five children together. The fourth, born in 1946, was Donald Trump.

Fred Trump was a tough parent and wanted his children to be involved in the family business. Donald Trump, alongside his brothers, Fred Jr. and Robert, all worked at Trump construction sites and rent-collection offices during the summer.

“As children, Bob and Donald used to follow Mr. Trump all over and were fascinated by the bulldozers and other heavy equipment,” Richard Levy, a family friend, told the New York Post.

Just like his father, Donald Trump was interested in the construction business at a young age, and would glue toy blocks together to make skyscrapers.

But at the same time, growing up a son of now real-estate mogul Fred Trump wasn’t always easy. He taught Donald and the rest of the children life the hard way, and believed kindness was a weakness.

“He did his best to beat it out of his sons,” said Mary Trump, a niece of Donald Trump’s.

Even though the Trump family was turning into a wealthy one, Fred Trump wasn’t big on spending money. From the 1950s, he and his wife lived in the same middle-class house in Queens.

Donald Trump said his father even created a new cleaning solution to keep down costs for his buildings.

While Donald Trump was educating himself, Fred was planning the next step in the Trump empire. In that respect, Donald was the one that was going to be taking over the family business, and the vision for the future was clear.

Fred was going to concentrate on the outer boroughs of New York City, while Donald focused on Manhattan. Even though there was a huge financial risk in entering the real estate and construction market in Manhattan, Fred took the chance. And it turned out pretty good.

”It was good for me,” he said. ”You know, being the son of somebody, it could have been competition to me. This way, I got Manhattan all to myself!”

Fred Trump revolutionized the middle-class urban housing business and became one of the biggest and wealthiest post-war builders. Donald Trump inherited an empire which today has grown into an organization boasting more than 500 business entities, including hotels and golf resorts.

Fred Trump – cause of death

Fred Trump loved being in the office, and was always working. However, in the 1990s, his health declined after he contracted Alzheimer’s Disease.

His son recognized it the first time they were driving down 5th Avenue in New York City, and Donald Trump delivered some exciting news: He’d bought the land underneath the Empire State Building.

“That’s a tall building, isn’t it? How many apartments are in that building?” Fred is said to have replied.

On June 25, 1999, Fred Trump passed away. Donald Trump had been at the hospital the night before, but by all accounts it was the saddest day of his life.

Fred Trump was truly an extraordinary man, helping New York’s boroughs to grow as well as providing apartments for our troops.