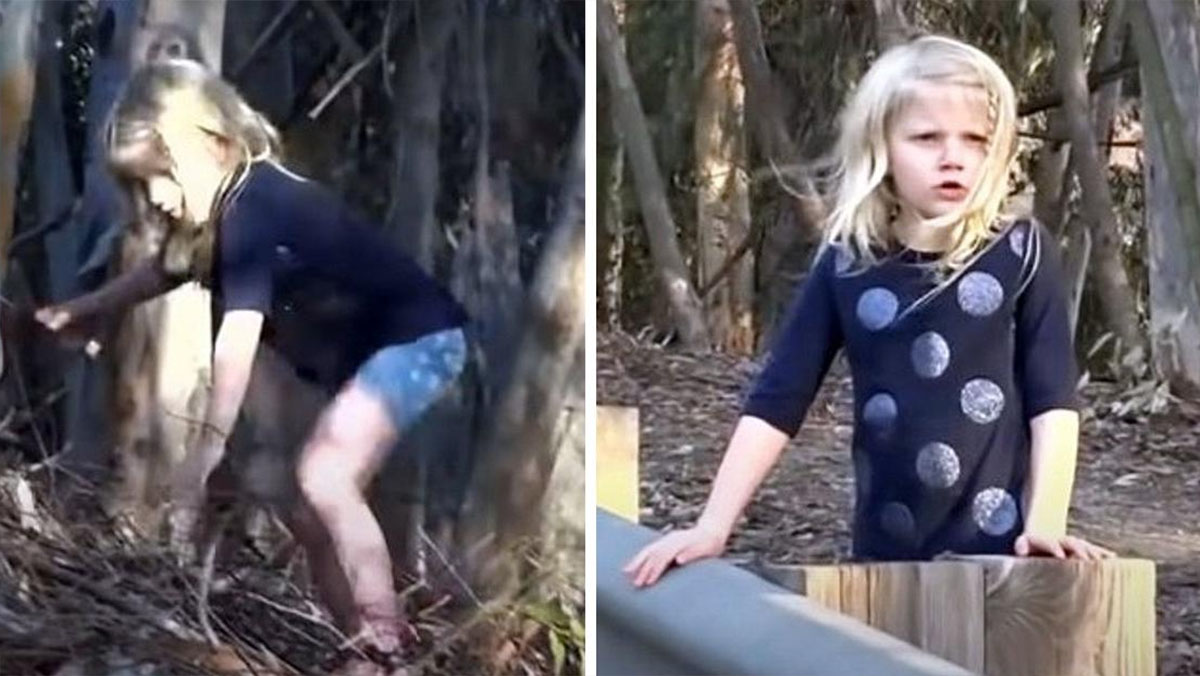 When Angela Shymanski veered off the road in her car with her two kids in the back, the family found themselves in a treacherous situation.

Angela and her children Lexi and Peter were on their way home from a family vacation in Calgary when Angela fell asleep at the wheel.

She lost control of the car and veered off the road plunging into a 40-foot embankment in the Canadian Rockies.

Five-year-old Lexi was left-leaning forward only held in by her five-point harness. Her mother’s life was hanging in the balance, she was still conscious with a broken back, broken ribs, and internal injuries.

Lexi’s 10-week-old brother had suffered a head injury and was bleeding.

At that moment little Lexi not only managed to free herself from her five-point harness, something her mom said she’d only done one or two times but then walked up a 40-ft ravine barefoot to wave down passersby.

“She somehow got out, adrenaline or whatever, and barefoot hiked up the embankment,” Angela told the Metro.

The tot reached the road just at the moment Loni and Jeremiah Jirik were driving by and couldn’t believe what they saw.

Young Lexi was waving down cars and asking for help and it wasn’t long before the youngster was inundated with helpful strangers.

“When the grown men, medics, and firemen say that they did it with ropes, I know that it’s unreal that she did it barefoot,” mom Angela said of the moment help arrived.

The family was rushed to the hospital by air ambulance and received medical care at the University of Alberta Hospital in Edmonton.

Lexi’s younger brother had to undergo life-saving brain surgery and her mom was treated for a broken back. Lexi only suffered minor injuries which she clearly ignored to save her family.

Little Peter arrived later at the hospital; the medics had no rush because they thought he was fine. Unfortunately, that wasn’t the case.

The doctors later realized that Peter had experienced brain trauma, so the little boy had surgery to ease the pressure of swelling.

”Peter’s healing was thanks to pediatricians and neurologists and the therapies that were available to us to give him the best chance of recovery,” Shymanski told Prince George Citizen in 2020.

The Royal Canadian Humane Association awarded Lexi with a medal, a recognition that is reserved for Canadians who display exemplary acts of bravery especially in times of adversity.

Lexi was awarded her medal in her princess dress and received a standing ovation from those around her.

”There’s something special about Lexi that she was able to do that heroic thing five years ago,” Angela said, speaking of the event in 2020.

What Lexi did is unbelievable. At just five years old she did something that most adults wouldn’t be able to achieve and frontline workers had to use ropes to do what she did barefoot and injured; she really is a remarkable little girl.