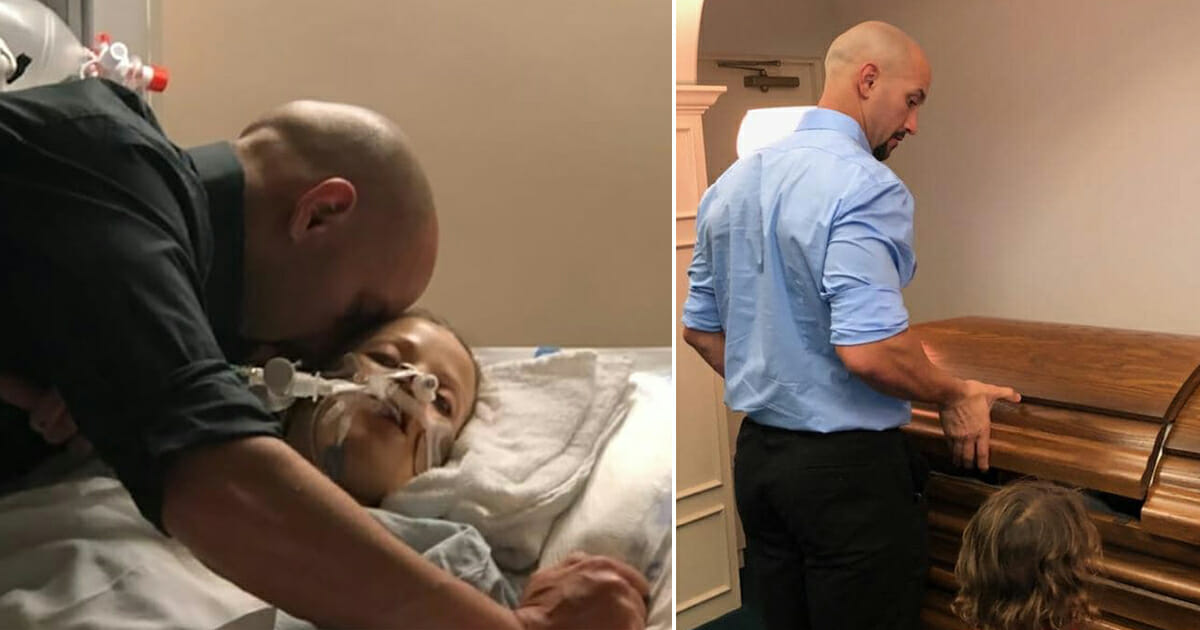 Krystil Kincaid was 8 months pregnant when a suspected drunk driver crashed into her car in California.

Her unborn baby died and Krystill was put on life support but died the following day.

Krystil’s husband shared images from his wife’s funeral on social media to demand justice for his wife and unborn child.

“How do I explain to my children this injustice. My children and I have never felt so disposable,” he wrote in a Facebook post.

It only takes a minute to change life as we know it.

A year ago, Zach Kincaid’s world changed completely when a drunk driver crashed into the car his pregnant wife was traveling in.

When the paramedics arrived at the scene, they saw the 29-year-old Krystil trapped inside her “partially on fire” minivan.

Krystil was rushed to a nearby hospital, where she was put on life support.

But tragically, there was nothing left for the doctors to do. Both Krystil and her baby were pronounced dead the following day.

Zach laid Krystil and their unborn daughter to rest on September 26 last year. He also took to Facebook and posted some heartbreaking pictures from the service, that left thousands in tears.

The images that husband and father-of-four Zach Kincaidwhich posted of her funeral in 2018 show his deceased wife and baby girl.

“A drunk driver speeding down a two-lane highway at 85+ mph in the wrong lane around a blind corner destroyed my family,” Zach wrote on Facebook.

The heartbreaking images show the family saying their goodbyes to 29-year-old Krystil who is lying in a casket with her baby girl.

Zach also carried his deceased baby girl, who the couple planned to call Avalynn, and allowed his children to hold the sister they never got to meet, according to People.

“The max sentence for killing my wife and daughter is 10 years max. The state of California doesn’t think there was intent, but I know driving recklessly in that manner, he didn’t intend anything good… my daughter’s due date was October 9th, a 36 week old fully developed baby isn’t considered a person in the state of California,” Zach wrote on Facebook.

Kincaid also told KESQ-TV that he was on speakerphone with his wife when she met with the accident.

“I heard her scream and then I heard her voice quiver right before I heard the loudest crash I’ve ever heard in my life. Smashing metal, and it sounded like the car was tumbling — and then all of a sudden it was just silence,” he said.

Marcos Forestal, the 28-year-old driver of the car that collided with Krystil’s vehicle was arrested and charged with driving while intoxicated, causing a collision with major injuries, according to a police statement.

In June he was sentenced to 10 years for gross vehicular manslaughter while driving under the influence, according to the Riverside County district attorney’s office, as reported by The LA Times.

Zach also shared a heartbreaking image of him saying goodbye to his wife in hospital on a GoFundMe page, which has so far raised $68,000 to help the family financially.

Zach hopes to force the state’s representatives to rethink drunk-driving penalties and he have set up a petition at change.org, which has raised almost 193 signatures: Ten years would not be enough to bring justice to this family when the man walked away from this crash uninjured, he posted video on Facebook live after the accident where he blamed Krystil, and never once did he go to check on her or see if he could help her. Why should the system not have a reasonable opportunity to charge this man with a sentence that would bring this family some justice since they no longer have their wife, mother, daughter, and friend?

This is so heartbreaking.

He made the choice to drink and drive. This woman, her unborn daughter and her family will pay the sacrifice forever.

Rest in Peace to both the mother and child. My prayers, too, to the husband and their respective families, ❤️❤️❤️??????

Please share to send this family strength in the years ahead.