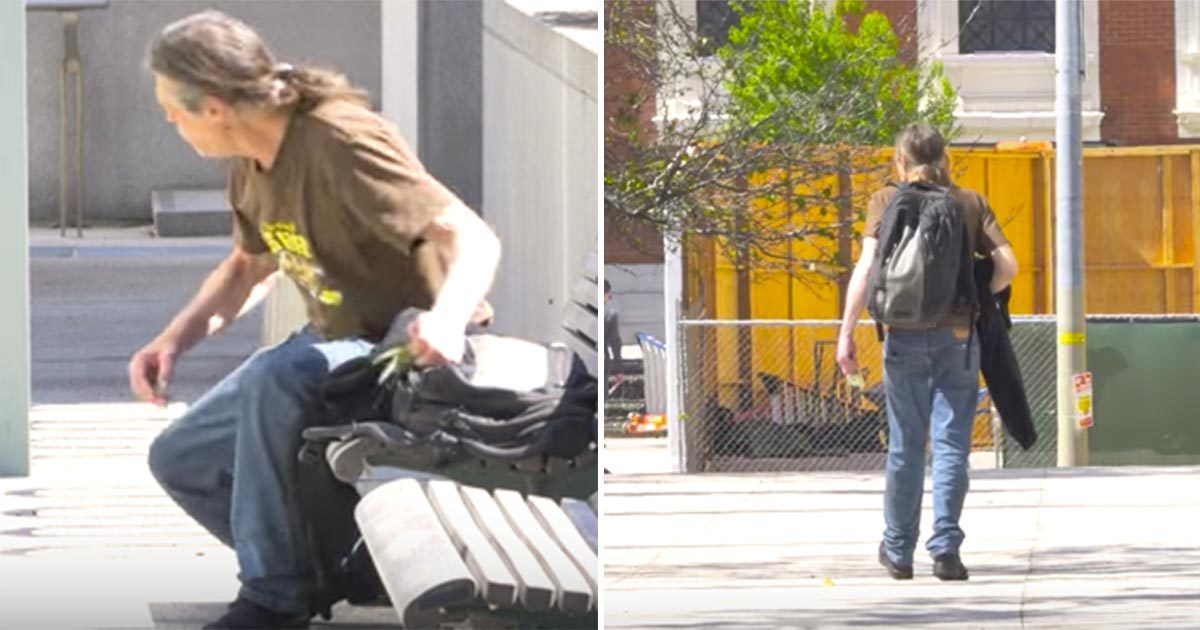 A helping hand often comes from where we least expect it—and it’s not uncommon for people who are themselves struggling to see the world with open eyes and help their fellow human beings.

This story is an excellent example of that.

When YouTube user Johal saw a homeless man lying asleep on a park bench, he decided to do a social experiment. He snuck up and put a some cash in the man’s bag—but he never could have imagined how the experiment would turn out.

A while after Johal left the wad of cash, the homeless guy woke up from his nap.

He immediately noticed the money—and started looking around to see who could have put it there.

After the shock had faded, the man realized that the money had probably come from a friendly stranger who wanted to help him.

The man gathered all of his belongings, which consisted of a backpack and a long-sleeved shirt, and began to trudge off. Johal then secretly followed the man and filmed him.

Soon, the man went into a shop.

And a few minutes later, he came out with two bags stuffed full of necessities like pillows and quilts.

The homeless man went back to the bench and sat down—and soon, Johal sat down next to him.

Johal pretended to be talking on his phone and told the imaginary person on the other end of the line that his daughter needed medical treatment, but that he didn’t have any money.

The homeless man overheard the whole conversation—and when Johal hung up, the man asked him if he was okay.

And then the homeless guy asked Johal if he could watch his bag while he went to do some errands.

Twenty minutes later, the homeless man returned—without his bags. He had returned the pillows and blankets to the store so he could give the money to Johal instead.

“You see to be in a little more trouble than I am. Take care of your daughter,” he said, and handed over the wad.

The homeless guy hadn’t eaten for more than a day, didn’t have shelter, and didn’t have anything to warm himself with. Even so, he made a generous and selfless gesture to help another human being.

After talking a while, Johal revealed that the whole thing was an experiment—and he gave the man $500 so he could buy everything he needed.

Watch the beautiful exhange in the video below:

This makes me all teary-eyed. Who would have guessed that a man who has so little would be so selfless and generous to a perfect stranger? The homeless man’s gesture is something we can all learn from. Please share it if you agree!