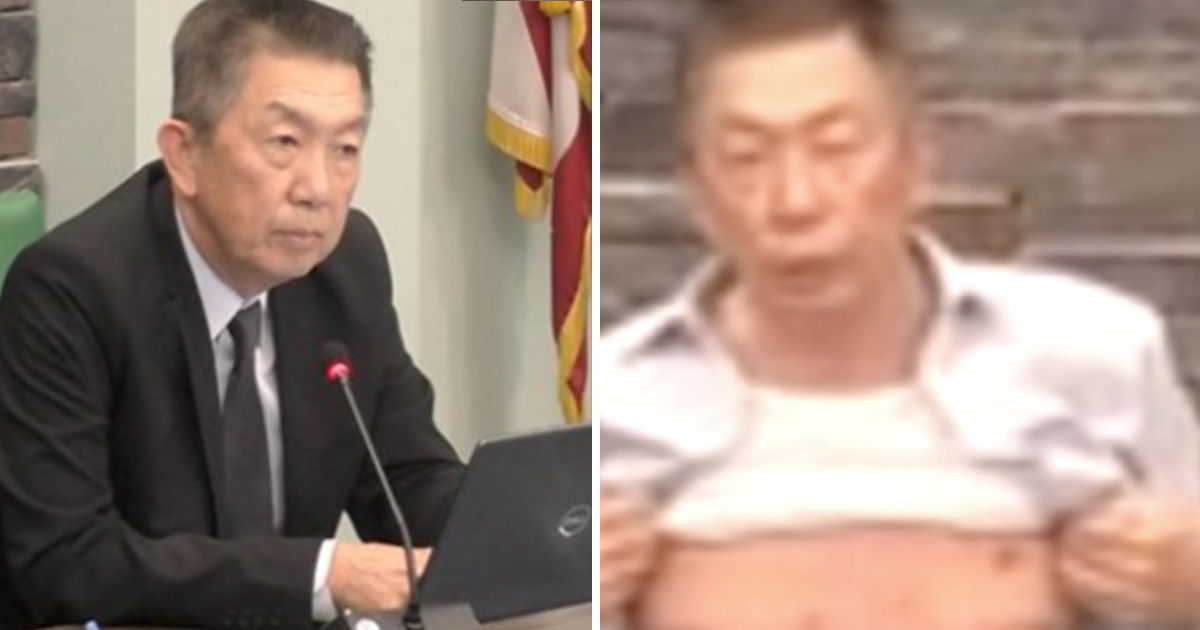 Lee Wong came to the U.S. when he was 18 years old but after he was nearly beaten to death on the street by a white U.S. veteran, he decided to join the army to learn about ‘being American.’

He retired after 20 years of active-duty service and had the scars to show for it – scars from multiple surgeries he underwent while he was in the Army to treat infected cuts he received during combat training in South Carolina.

Now 69 years old Wong is an elected official in West Chester Township, near Cincinnati, where he has lived with his wife for around two decades.

But despite his impressive credentials and decades serving his country he is angry at the rising anti-Asian sentiment across the nation.

Wong got so fed up with people questioning his patriotism because he’s Asian American that he decided to show everyone just how patriotic he was.

During a meeting of the West Chester Township Board of Trustees, of which he is president of, Wong said: “There are some ignorant people that will come up to me and say that I don’t look American or patriotic enough,” he said on March 23.

“They can’t get over this face. I want to show you something, I want to tell you, because I’m not afraid. Here is my proof,” he said as he unbuttoned his shirt and showed his scars. “This is sustained from my service in the U.S. military, now is this patriot enough?”

Wong ran for a state Senate seat last year and knocked on thousands of doors during his campaign noting the dynamic and diverse community of which he is a part of.

But he said anti-Asian sentiment has gotten “worse and worse” in the last few years for him and other members of the community, who he described as hardworking Americans, as per CNN News.

Wong, who was born in British Borneo, now part of Malaysia, said he was very emotional when he showed his scars at the meeting.

“After I took my shirt off, I thought wow, I felt better, after so many years I got it off my chest.”

Wong, whose speech has since gone viral, says two years after arriving in the U.S. he was attacked in the street by a World War II veteran who had PTSD and thought he was Japanese.

“I had to go to the hospital, he tried to kill me. That was a turning point, I was very confused about this country so I went to the army to learn about Americanism,” he said, as per CNN.

He served in the U.S. Army for more than two decades as a CID special agent.

“I served to defend your freedom of speech, your liberty, your constitution. After 20 years I came back here and you tell me I don’t look American because I look different, they couldn’t get over this face…that’s why I was making a point.

“I want to serve my community, I feel that it is my duty, I live in it I want to have a voice in it. Everyone needs to be treated equally with dignity and respect and most of all bring civility back to our society.”

Following the recent killings of 8 people – including 6 Asian American women at spas in the Atlanta area, Wong said his friends and family members are afraid.

“It has to stop. It just has to. I just felt that this is really going out of control here,” he said. “A few ignorant people that insult all. Barbaric. Horrible.

“I mean, it’s wrong to go out to hurt somebody just because they look different or they don’t look American enough. We are America.”

Everyone needs to read and hear Lee Wong’s words. Nobody who has lived in America for as long as he has and served in the U.S. army should be made to feel as he does.

Help us spread his important message by sharing this story.