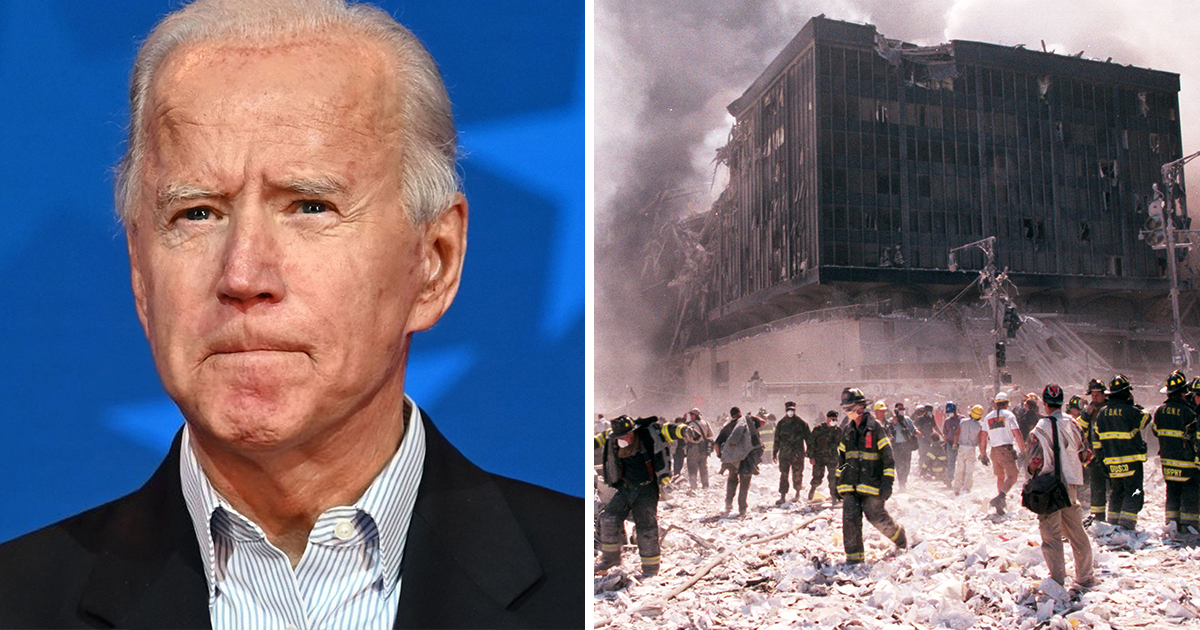 There’s barely an American alive who was around on 9/11 and doesn’t remember what they were doing on that fateful day.

The sheer magnitude of the devastation wrought by the terrorist attacks means they’ll never be forgotten, but it was with renewed poignance that the US reflected over their darkest day on it’s 20th anniversary.

2,977 people lost their lives when two hijacked planes hit the twin towers. A third hit the Pentagon, while a fourth was quite possibly on its way to the Capitol Building in Washington when its passengers fought their way into the cockpit and forced it to crash in a field in Pennsylvania.

On the morning of September 11, 2001, one man, then chairman of the Senate Foreign Relations Committee, was traveling on the 8:35 a.m. train from Wilmington, Delaware to Washington.

At the weekend, Biden visited the three sites immortalized by the hijacked planes – New York’s Ground Zero, the aforementioned field in Shanksville, Pennsylvania, and of course the Pentagon in Arlington, Virginia.

As per reports, President Biden was on the phone to his wife, Jill Biden, when the second plane hit the World Trade Center on 9/11.

According to CNN, Joe and Jill’s conversation went as follows:

“Another plane … the other tower.”

By the time Biden had got off his commuter train at Union Station, he could see a haze of smoke in the sky beyond the Capitol Building.

The Pentagon had just been hit by a third plane.

In his memoir “Promises to Keep: On Life and Politics,” President Biden explained how he tried his best to “show the country we were still doing business.”

To that end, Biden tried to enter the Capitol, only to be turned away by a police officer. Linda Douglass, a reporter with ABC News at the time, said she saw Biden and then-Republican Sen. John Warner arguing over “who had the most seniority, because Biden wanted Congress to be called back into session.”

In the end, Biden agreed to appear on ABC. President George Bush was at the time on Air Force One, Vice President Dick Cheney in a secure bunker, and congressional leaders were in the process of being taken to safety.

“Terrorism wins when, in fact, they alter our civil liberties or shut down our institutions,” Biden said that day.

“We have to demonstrate neither of those things have happened.”

He added: “This nation is too big, too strong, too united, too much a power in terms of our cohesion and our values to let this break us apart. And it won’t happen.”

Indeed, Biden’s inspiring comments even attracted the attentions of President Bush, who called Biden from Air Force One to praise his words.

“It was important to show the American people that everybody now was safe and that we were all together in this,” Former Rep. Bob Brady, who was with Biden for much of 9/11, said.

“There were the Democrats, the Republicans — we were going to be supporting the President totally. And that’s the message Joe sent, and that’s why the President called him.”

Biden urged Bush to return to the White House and not be seen heading into a bunker with the U.S. facing arguably the most shocking and turbulent day in its history.

“I recalled at the time a story about the leader of the French resistance, Charles de Gaulle, near the close of World War II,” Biden wrote in his memoir.

“When France was liberated, there was a celebratory parade down the Champs-Elysées in Paris — dignitaries, generals, and officers — led by Gaulle himself. As they walked toward the Hôtel de Ville, shots rang out from overhead, and everyone hit the ground except de Gaulle. He continued to walk ramrod straight.”

Where were you on 9/11? What are your memories from that fateful day?

Please, join us in paying your respects to the men and women who lost their lives that day, and to send prayers to their families and loved ones.