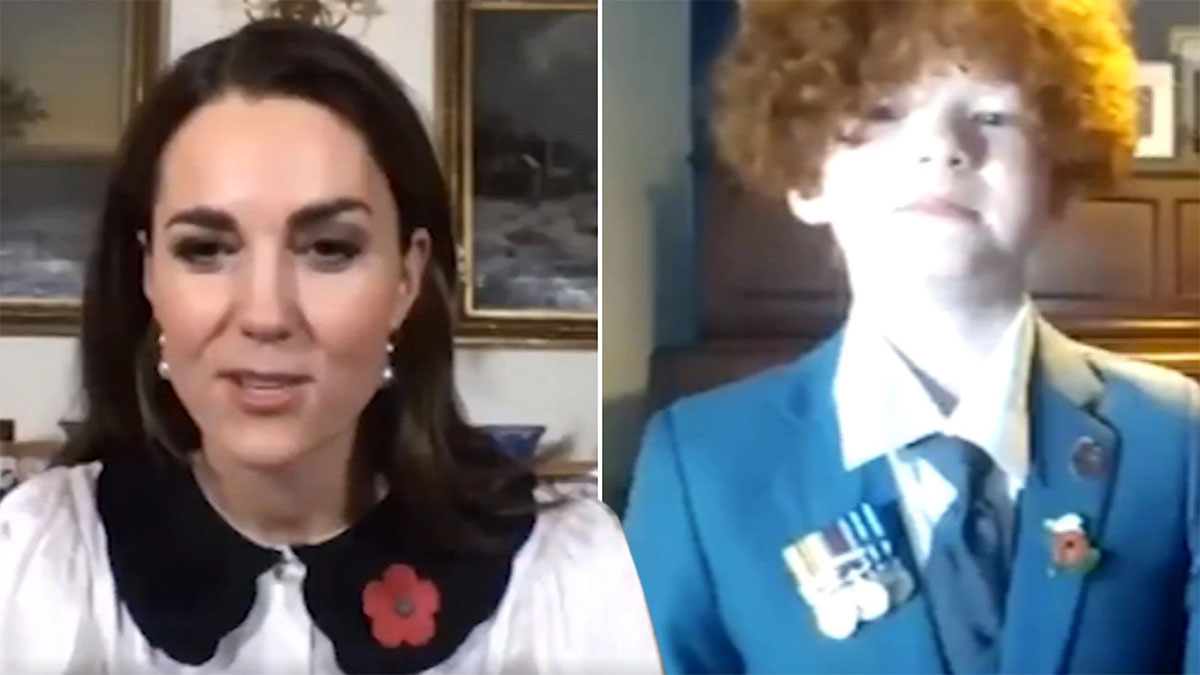 As we honor veterans on both sides of the Atlantic the Duchess of Cambridge Kate Middleton chatted to those children who have lost parents in service.

In a touching moment caught on camera Kate Middleton comforted an 11-year-old boy who was wearing his dad’s medals and praised him for his bravery.

Charlton Taylor’s dad was Royal Marine Michael Taylor killed in action in Afghanistan in 2010 when Charlton was just 10 months old.

The Duchess pointed to the three medals pinned on the Welsh youngster’s chest, asking: “Are those your daddy’s medals? Wow.”

Charlton told her one was for his service, another was for his tour of Afghanistan and the other for Iraq.

On Remembrance Sunday The Duke and Duchess Cambridge, both 38, paid their respects to Britain’s war dead at the Cenotaph on Sunday.

On Monday the couple held video calls with the RAF, Navy and Army and families supported by the Royal British Legion during remembrance week in the U.K.

Speaking via the video call, Kate told those who have lost loved ones they should be “proud” of their achievements and “the sacrifice and the bravery that they’ve shown”.

The Duchess added: “I’m sure you spend your time every day remembering your loved ones but it’s so important that the nation comes together and really spends time thinking about those who have lost their lives and the families that have been impacted.”

Kate asked Charlton if he would tell her about his dad, but he said he couldn’t remember much.

He said he liked looking at photos of his dad and hearing stories about him as Kate exclaimed: “Amazing”.

His mom Sonia Fleming said her husband had died when Charlton was 10 months old and her other sons were 11 and 13.

She added: “Probably the hardest thing is doing it on your own”.

I hope this star royal couple were able to bring some comfort to those who have lost loved ones.

The Duke and Duchess are helping to shine a light on all our service men and women who sacrifice their lives to keep us safe and the families that live with the loss.

Our hearts are with you. Thank you for your service. Please share.