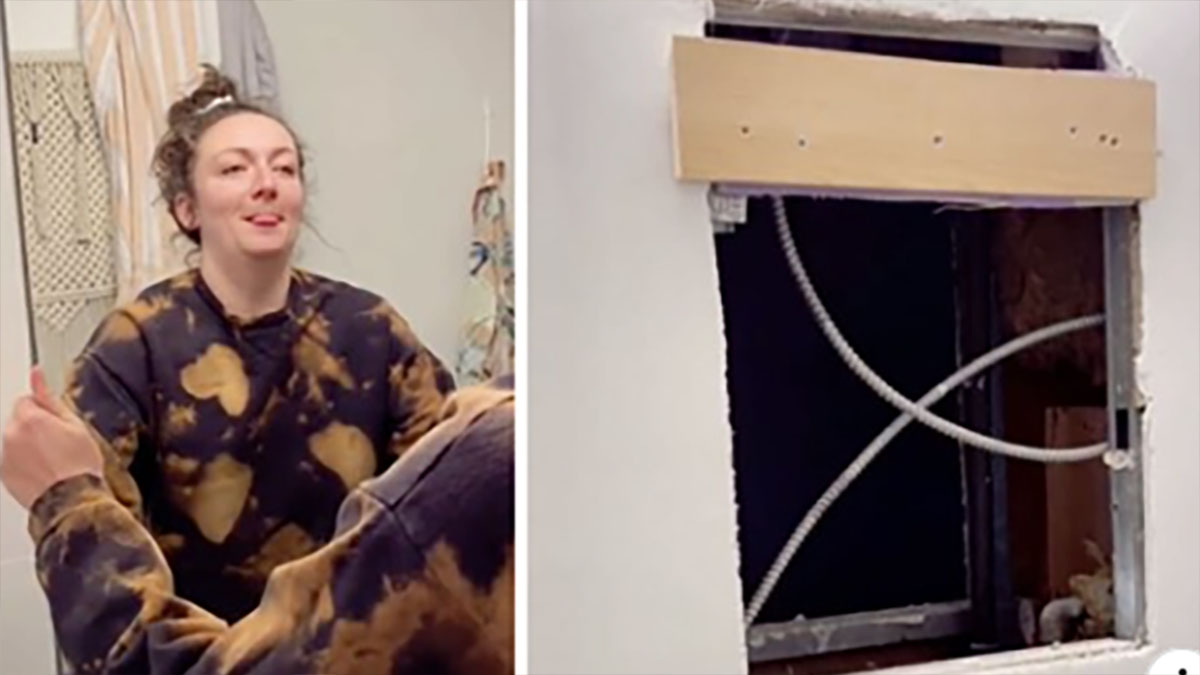 It’s the subject of horror movies – discovering a secret room in your home with signs someone could be living there.

But for one woman in New York the nightmare was a reality when she realized her bathroom mirror came off her wall.

Samantha Hartsoe had been experiencing an unusual draft coming from her bathroom mirror.

On a closer inspection she found that she was able to remove the mirror to reveal a a hole in the wall big enough for a person to squeeze through leading to another apartment.

Samantha recorded her creepy discovery in four TikTok videos; the first one shows her hair blowing in her bathroom caused by the cold draft.

After looking for vents she realizes it’s coming from her mirror and then discovers the mirror moves.

“Let me show you what I found. There’s a room back there,” she says on the video.

In her second video, Samantha took her mirror away to show a dark and creepy-looking apartment lying behind a hole in the wall.

Her friend John can be heard on the video saying: “What if there is someone living in there right now?”

Samantha then crawls through the hole to explore the surprise addition to her apartment.

She records the lounge which has trash bags on the floor and a water bottle.

Samantha notes the dark apartment is freezing and even discovers a basement that is also filled with rubbish.

After her investigation is complete she crawls back through the hole behind her bathroom mirror to the safety of her own apartment.

“Made it out alive. My landlord will be getting a fun phone call tomorrow,” she says.

Her videos have been viewed over 14 million times.

Samantha appeared on “The Ellen DeGeneres Show” on Tuesday.

“Where I went is when you’re not home, somebody is taking that mirror off on the other side and coming into your apartment,” Ellen said, as per People.

She then gifted the viral star a new vanity and $10,000 recommending the tenant superglue the mirror to the wall.

I really hope the hole behind her mirror gets sealed soon, I don’t think I could stay in that apartment.

Please share if you too are shocked by Samantha’s creepy discovery.