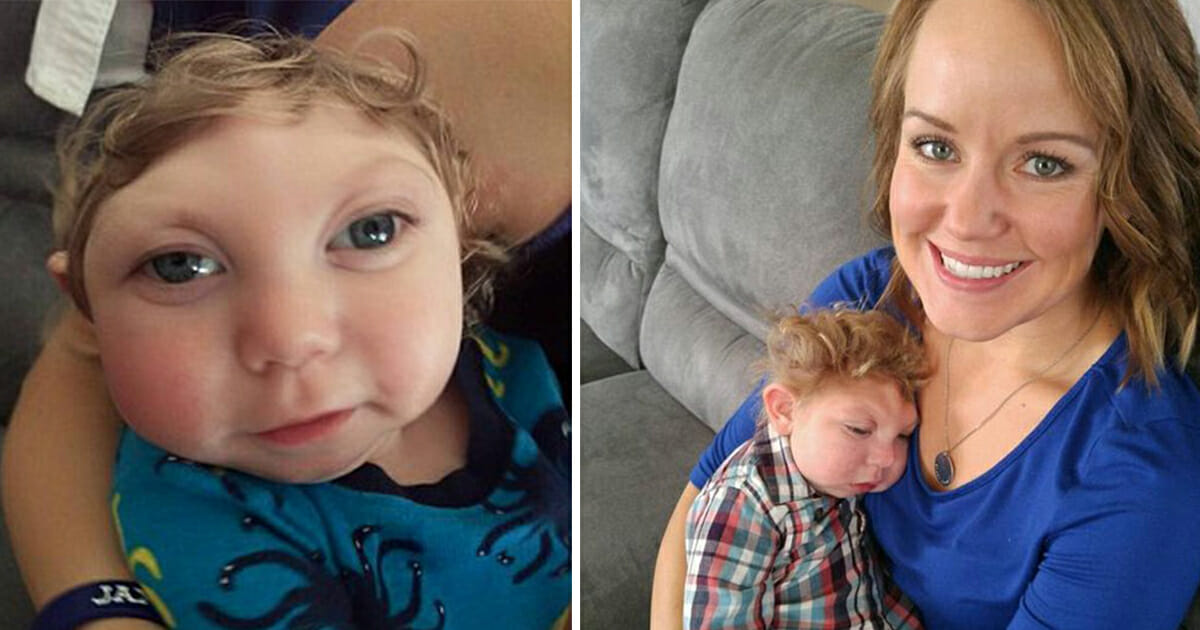 It may all seem a bit unreal, but everything about little Jaxon Buell’s moving story is as real as can be.

The child, famously known as ‘Jaxon Strong’, was born in 2014 with a rare, extreme birth defect, Microhydranencephaly, where the brain and skull don’t form properly. Pictures of him went viral over the world.

It is estimated that about one in 4,859 babies are born with this rare condition in America, but most die in the womb or shortly after birth.

Despite this, his brave parents Brittany and Brandon Buell never gave up on their son – they were determined to do everything in their power to give him a joyful life.

According to doctors, he would maybe survive a few days – at the most.

Even though the medical experts predicted a short survival time for little Jaxon, his parents tried to stay strong.

And their journey with their brave little boy would touch millions of people across the globe.

When Jaxon Buell arrived into this world, on Aug 27, 2014, in Orlando, Florida, he was born with just 20 percent of his brain.

The first pictures of him looked scary – most of Jaxon’s skull was missing. His little body was blue and black and the umbilical cord was wrapped around his neck.

Doctors had no idea what had caused such a huge defect but warned his parents that he would survive for only a few hours. Mom Brittany, 27, said she was devastated at the thought her son wouldn’t make it.

“It was heart breaking because something I always wanted my whole life was happening, but then I was told there was a possibility it might be a stillborn,” she told UNILAD.

He stayed in the neonatal intensive care unit for three-and-a-half-weeks.

But, against all odds, not only did he survive birth, Jaxon did fine and went on to celebrate birthday after birthday. For a child who was never expected to walk, talk, hear or see – little Jaxon was defying all expectations.

But, of course, the family went through some very tough times as well.

Many questioned whether it was right to let the boy survive with such a serious malformation. On social media, many claimed that Jaxon’s parents were cruel and irresponsible.

The family dealt with some relative differences while raising him, but they couldn’t be happier to do so.

“For our family, it’s also normal to feed our baby by feeding tube. It’s normal to embrace him as he goes through his startle seizures multiple times a day. It’s normal to look at Jaxon and see a perfectly created boy and other babies truly do look weird and oversized to us,” Brandon said.

“When we started this journey, we were scared and clueless because Jaxon’s condition is so rare,” Brandon told Healthy Living magazine.

“To see all the wonderful things that are happening because of Jaxon is truly amazing. He has only been here a short while, but he has already touched and inspired more people than I ever will in a lifetime. There is definitely a plan and a purpose for his life.”

The family lived just outside Orlando for several years after Jaxon’s birth. But they eventually divorced and Brittany moved out of state with Jaxon, according to Lake & Sumter Style.

Recently, Jaxon’s condition deteriorated. He passed away “very peacefully and comfortably” on April 1 in North Carolina, his parents said, according to Today. He was five years old.

“He passed away in my arms and surrounded by his parents and family who were loving on him and providing comfort and endless hours of snuggles throughout his final days,” Brandon Buell, 35, his father, told TODAY in an email.

“Ultimately, Jaxon passed away from his body and organs shutting down, as is common with children like him. This had absolutely nothing to do with the COVID-19 virus, but was something we always knew from the beginning would likely happen. We just didn’t know when.”

In a heartfelt Facebook message, his mother, Brittany Lynn, wrote:

I wasn’t ready but Jesus was ready for you in heaven. Selfishly my heart is broken because I want to cuddle you in my arms. However, I am happy you are now healthy, with no pain and enjoying your eternal life without a care in the world … IN FULL FORM! Forever my baby you will be. Please continue to watch over your sister big bro! We love and miss you more than words can express.

“Jaxon’s legacy is about his strength and his amazing sweet spirit. He truly made me, his mom, his family, and all who learned of his story better,” his dad said.