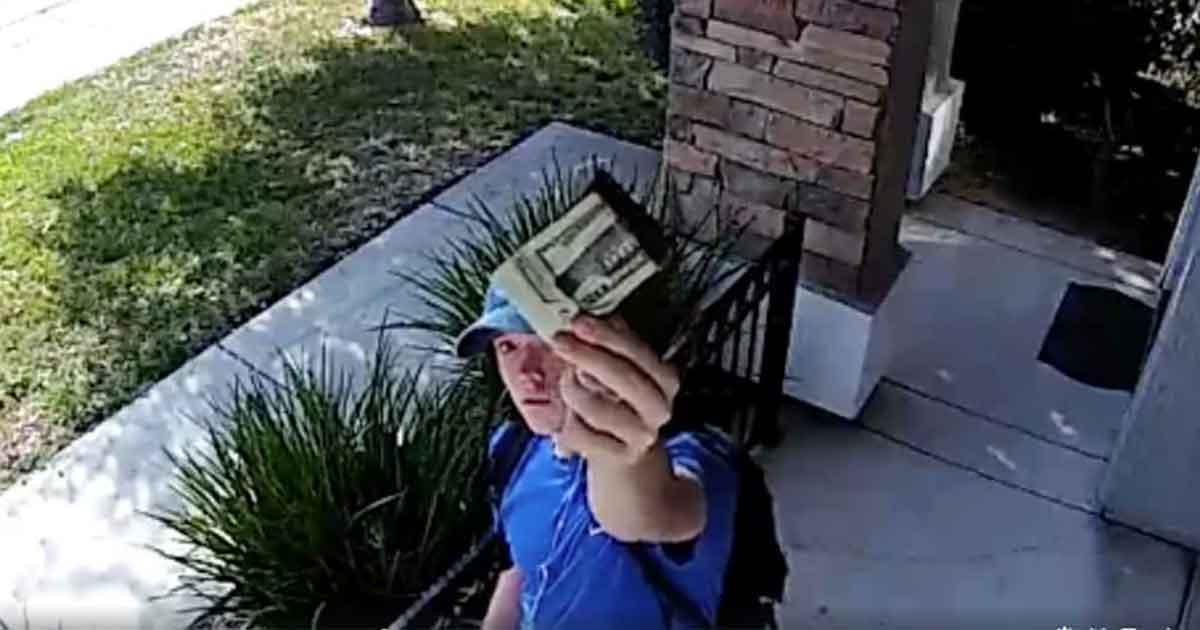 Children are taught not to open the door to strangers while they’re at home alone. And many adults follow this rule, too, including Melissa Vang.

These days, we hear stories of burglars knocking on doors to see if anyone is home before they use all sorts of tactics to get into the house.

This was Melissa’s first thought, but she couldn’t have been more wrong…

Melissa was home with her two young daughters one day a year ago when someone suddenly knocked on the door. She wasn’t expecting a visit, so she was instantly suspicious.

Melissa has a surveillance camera at her front door. She set it up to keep track of people outside. Melissa decided not to open the door and instead watched the security cam a little while later.

“I don’t open my door to strangers — or anyone really that I don’t know or recognize,” Melissa told KCTV5 News Kansas City.

But this stranger didn’t want to hurt the family.

Melissa immediately realized this when she watched the footage later that day. Instead of catching a potential burglar, the camera had caught something that touched Melissa’s heart.

The person who knocked on the door was just a teenager. And he had good intentions.

Here’s what happened: a teen named Tyler Opdyke rang the door to see if there was anyone home. When no one opened, he looked around and saw the surveillance camera. Then he went up to it. Melissa could see that Tyler had something in his hand. He directed the object toward the camera and held it against the lens so she could see what it was.

Melissa immediately recognized it. It was her husband’s wallet! And it contained $1,500 in cash.

It turned out that Tyler was passing out flyers in the neighborhood. When he was in the family’s driveway, he saw the wallet. Melissa’s husband must have dropped it when he was getting out of the car.

Tyler stretched himself toward the camera — and held the wallet up to it. Then he did something incredibly smart. He clearly showed the camera where he hid the wallet before he left. He probably thought that the family would watch the video later and discover the wallet. A very smart guy, if you ask me!

But still, he wasn’t completely convinced and couldn’t let go of the wallet. He really wanted to know if he was giving it to the right person, so a moment later he went back to the house to see if the family might have come home.

It was then that he met Melissa. She was noticeably touched — after watching the footage and seeing Tyler’s nice gesture.

“I just really thought about what I would want someone to do if I were to drop my wallet,” Tyler explained in an interview later.

Of course, the family was extremely grateful for his fine action! Watch the footage from the surveillance camera here:

What a sweet and smart guy! He will surely go far in life! Please share this story to inspire others to think like Tyler. We need more positive news in our Facebook feeds today!