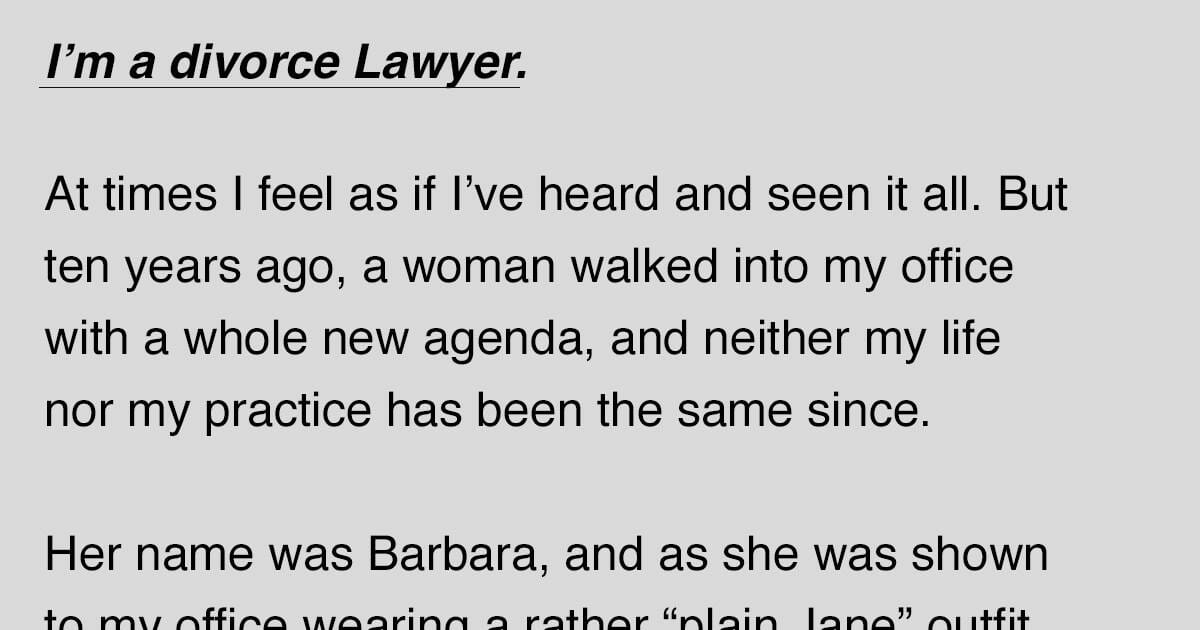 These days there’s nothing unusual about divorces – in fact, around half of all marriages are ended in divorce.

Of course, though it might be an increasingly common thing in today’s world, children are often in the picture. They’re sometimes forgotten in amongst all the bitterness; left to come to terms with things while their parents argue.

It’s true that some couples go about their divorce proceedings in a civil manner, but others allow things to take a significantly rockier road to finality. Obviously the fallout of such a course of action can be felt for years to come.

When one attorney met with a woman who was filing for divorce, he assumed it would follow the usual procedure.

However, this woman’s story – one of violence and torture – would shake him to his core.

The following story is true and published in the book Chicken Soup for the Soul: Moms Know Best.

At times, I feel as if I’ve heard and seen it all. But ten years ago, a woman walked into my office with a whole new agenda, and neither my life nor my practice has been the same since.

Her name was Barbara, and she was shown to my office, wearing a rather “plan Jane” outfit, I guessed her to be about nineteen and fairly innocent.

I was wrong. She was thirty-two, with four children between the ages of three and nine. I’ve heard many brutal stories, but the physical, mental and sexual abuse that Barbara had suffered at the hands of her husband made me sick to my stomach.

Yet she finished a description of her circumstances by saying: ‘Mr. Concolino, you know, it isn’t all his fault. My children and I have remained in this situation by my choice; I take responsibility for that. I’ve know the end of my suffering would come only when I decided I’d suffered enough, and I’ve made that decision. I’m breaking the cycle.’

I’d been practicing law for fifteen years at that point, and I’ve got to admit that in my head, I was getting great pleasure from thoughts of nailing that guy to the wall.

‘Do you believe in forgiveness, Mr. Concolino?’ she asked.

‘Yes, of course,’ I said. ‘I believe what goes around comes around, and if we try to do the right thing, good comes back. The clients of mine who have withheld forgiveness have withheld it only from themselves.’

Those words were so common for me that they practically spoke themselves. And yet, if anyone had cause to be full of rage, Barbara did.

‘I believe in forgiveness, too,’ she said quietly. I believe that if I hold on to anger at my husband, it will only fuel the fire of conflict, and my children are the ones who will get burned.’

She gave a tremulous smile. ‘The problem is, kids are very smart. They can tell if I haven’t truly forgiven their dad … if I am just saying words. So I have to really release my anger.

‘And here is where I need a favour from you.’

I leaned forward across my desk.

‘I don’t want this divorce to be bitter. I don’t want all the blame put onto him. The thing I want most is to truly forgive him, and to have both you and me conduct ourselves accordingly.’ She paused and looked me in the eye.

‘And I want you to promise to hold me to this.’

I’ve got to say, this request was against my best lawyerly business advice. But it fit my best human advice, hand in glove.

It wasn’t easy. Barbara’s husband had no interest in taking the high road. The next decade was marked with his ugly character assassinations of her and repeated periods of nonpayment of child support. There were even times when she could have had him thrown in jail, but she never would.

After yer another court sessions that went in her favor, she caught me in the corridor. ‘You’ve kept your promise, Bob,’ she said, and she laughed. ‘I admit that there have been times I’ve wanted to curse you for making me stick to my belief. I still wonder sometimes if it’s been worth it. But thanks.’

I knew what she meant. In my opinion, her ex continued to violate normal standards of decency. Yet she had never responded in kind.

Barbara ultimately found and married the love of her life. Although matters were settled legally, I always enjoyed getting her Christmas card, hearing how her family was doing.

Then one day I received a call. ‘Bob, it’s Barbara. I need to come in and show you something.’

Now what? I thought. How long is this guy going to keep at this? How long before she finally cracks?

The woman who walked into my office was lovely and poised, full of so much more confidence than she had possessed ten years earlier. There even seemed to be a bounce to her step.

As I stood to greet her, she handed me a photo – and eight-by-ten taken during her oldest son’s senior year in high school. John was wearing his football uniform; his father stood to his left rigidly and coldly. The boy himself was looking proudly at his mom, who stood close to him, a warm smile on her face. I knew from her Christmas letters that he had graduated from a very well-respected private high school.

‘This was after he caught the winning touchdown in the championship game,’ she grinned. ‘Did I mention that game gave their team the number one ranking in America?’

‘I think I heard something about it,’ I smiled.

I turned the photograph over to see what her son had written.

I want you to know that you have been the best mom a boy could ever have. I know because of how Dad worked so hard to make our lives so miserable. Even when he refused to pay all he was supposed to pay for school, you worked extra just to make sure none of us missed out. I think the best thing you did was what you did not do. You never spoke bad about Dad. You never told me he had other ‘new’ kids to support; he did.

With all my love, I thank you for not raising us in a home where the other parents was the bad one, like with my friends who went through divorces. Dad is and has been a jerk, I know it, not because of you, but because he chose to be, I do love you both (you would probably still slap my behind if I said I didn’t love Dad), but I love, respect and admire you more than anybody on the face of the earth.

Barbara beamed at me. And we both knew it had been worth it.”

What do you think to this incredible story? Share this with your friends if you were also touched by this.