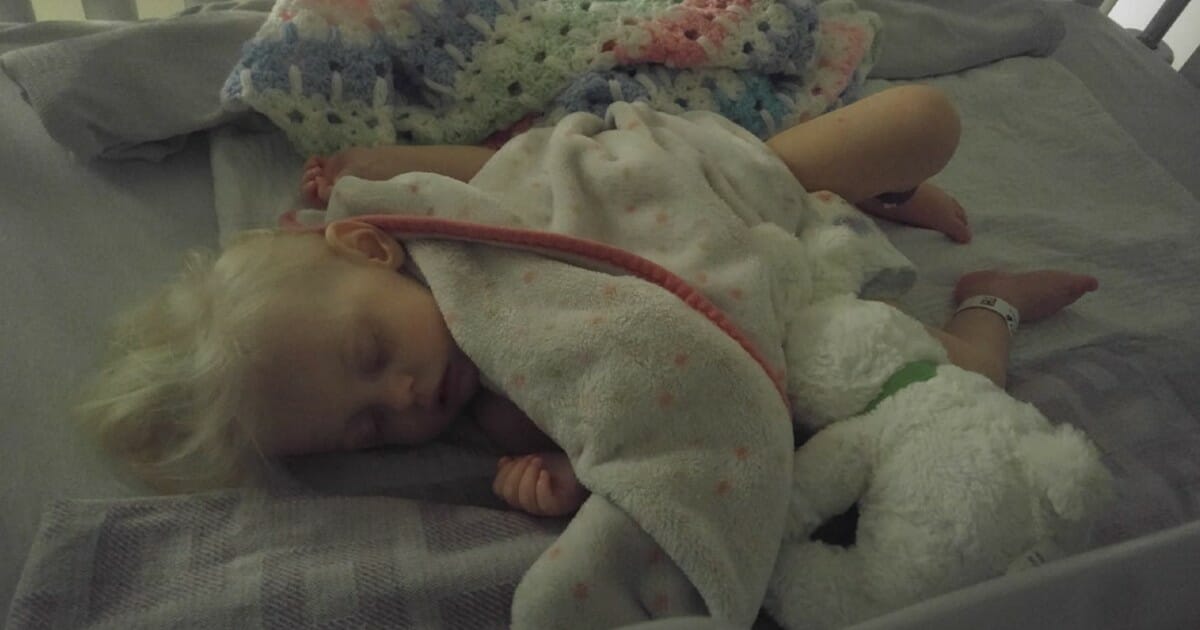 Babies and milk go together like peas and carrots. At some point nearly every child drinks a bottle of milk.

But did you know too much milk can actually harm a child?

Anastacia Gencarelli found that out the hard way when her nearly two-year-old daughter Mia became gravely ill from consuming too much cow’s milk. And now she’s warning other parents about the dangers of allowing kids to drink too much milk.

Anastacia said it began when Mia began pulling at her ears. Suspecting an infection, Anastacia took Mia to her pediatrician where she received a week’s worth of antibiotics.

After the course of antibiotics, Mia was back to herself, but after nearly a week off the medicine, the toddler’s health took a turn. Anastacia brought her daughter back to the doctor and they left with more, but this time she didn’t get better.

At this point, Mia was lethargic and she began eating diaper wipes and chalk, a sign of pica, an eating disorder that involves eating nonedible items.

Mia was very, very sick and continued to get worse.

“She was very miserable, and [showing] loss of color,” she told CafeMom.

With Mia showing no signs of improvement, Anastacia and her husband decided to take their daughter to the emergency room. There they were quickly whisked away where doctors monitored her vitals and attempted to draw her blood.

“They start trying to take blood and they can’t, they are trying to put an IV in they can’t — it took 7 pokes just to get blood out of her. It took 4 pokes before they made the choice to put the IV into her femoral artery,” she wrote on Facebook.

When the blood tests came back, the doctors had an answer.

Once the results from Mia’s blood tests came back, doctors informed her parents what was making their baby so sick–milk anemia.

Milk anemia is the result of drinking too much cow’s milk, though it can happen with any milk not fortified with iron.

In Mia’s case, despite no external bleeding, she lost three-quarters of her body’s blood. She needed a blood transfusion along with several tests and scans.

My poor little two year old girl not only had to deal with over 15 pokes for blood and IVs , she had a full blood transfusion last night to bring her levels up and had to under go ultra sounds, xrays and more — she is still not out of the woods, she is still not safe yet. She will need to be on iron for the forseeable future , she will not be allowed more then 2 bottles or 8 oz portions of milk a day…SHE ALMOST LOST HER LIFE

“The blood transfusion solved the hemoglobin issue. The iron is helping the hemoglobin and the anemia,” Anastacia said. “But due to the location of her IV, she developed a blood clot in her leg the IV was in, so she is also now on anti-coagulants to prevent that from harming her.”

So please if this nothing more then extra knowledge in your mom tool box amazing if it saves you all from the fear, the scare , the terror of watching your child the way our child was Spread the news that Milk Anemia is a thing AND ALWAYS TRUST YOUR MOM GUT,” she wrote on Facebook.

She added that once Mia is better she will only be allowed to drink 16-20 ounces per day.

Have you ever heard of milk anemia? Share this on Facebook to help get the word out!