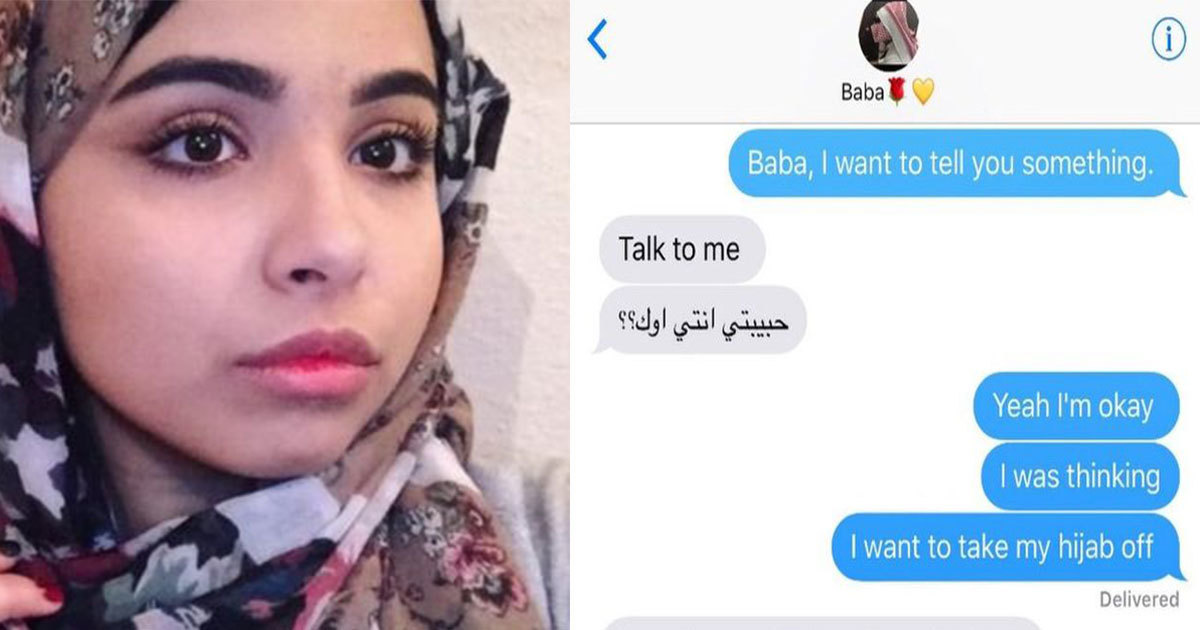 As a young Muslim, you’re bound to run into prejudice and discrimination these days.

Among one of the most common misconceptions about Muslim women in particular is that they are forced to wear the veil. In addition, there are many claims that this religious symbol represents Muslim women’s oppression.

These kinds of prejudice is precisely what 17-year-old Lamyaa faced when she got involved in a discussion online.

But Lamyaa is not the type that just gives up when faced with a challenge. Instead, she did something that is now being hailed by thousands of people online.

Lamyaa was having a discussion in a group chat on Facebook. The subject was US president Donald Trump. Lamyaa’s opinions differ from the President’s, and she openly expressed her views in the chat.

This led another person in the chat to verbally attack Lamyaa – and her religion. Lamyaa is Muslim and wears the hijab.

“Stop defending Islam B**** shut up you couldn’t take that scarf off or your dad would beat your a**,” they wrote.

This inspired Lamyaa to do something a little out of the ordinary. She wrote to her dad.

“Barba (dad in Arabic), I want to tell you something,” Lamyaa wrote to her dad, who according to Buzzfeed, lives in Saudi Arabia.

“Talk to me. Are you ok, honey?” replies the dad, switching between English and Arabic.

“Yeah I’m okay. I was thinking. I want to take my hijab off,” Lamyaa replied.

Then the dad answered something that completely disproved the prejudices that Lamyaa was getting abused with.

According to Buzzfeed, Lamya’s intention was not to actually take off her hijab. She simply wrote to her dad to disprove the prejudice that Muslim women are always forced to wear it by their male family members.

Lamyaa then shared her conversation with her dad with both the abusive person and on Twitter.

Since Lamyaa uploaded the conversation on Twitter, it has had close to half a million interactions.

Most reactions have been positive and supportive of Lamyaa and her dad and their view of religion. But others were quick to point out that there were still women across the world that are in fact forced to wear the hijab. Lamyaa thus came back with a follow-up to her post to clarify her exact message:

“A lot of people mistook this tweet as me saying no women are forced to wear the hijab. I just wanted to say that that was not the point of the tweet,” she wrote.

“The tweet was something that happened and I think the way people perceive it is up to them. Yes, a lot of women are forced to wear the hijab. That’s horrible and I have been one to point that out numerous times. That oppression however isn’t what the hijab symbolizes, it’s not why women wear it. I personally chose to wear the hijab, for myself and for god. I do not speak for other women. I do not represent anyone but myself. However, I will always stand up for others and it breaks my heart to know that some women do not get to make a choice in what they do with their OWN bodies.”

Lamyaa is incredibly wise and strong, and I think did a great job at speaking her mind and helping disprove harmful prejudices that lead to discrimination and racism. Please share this article to pay tribute to Lamyaa for her courage.