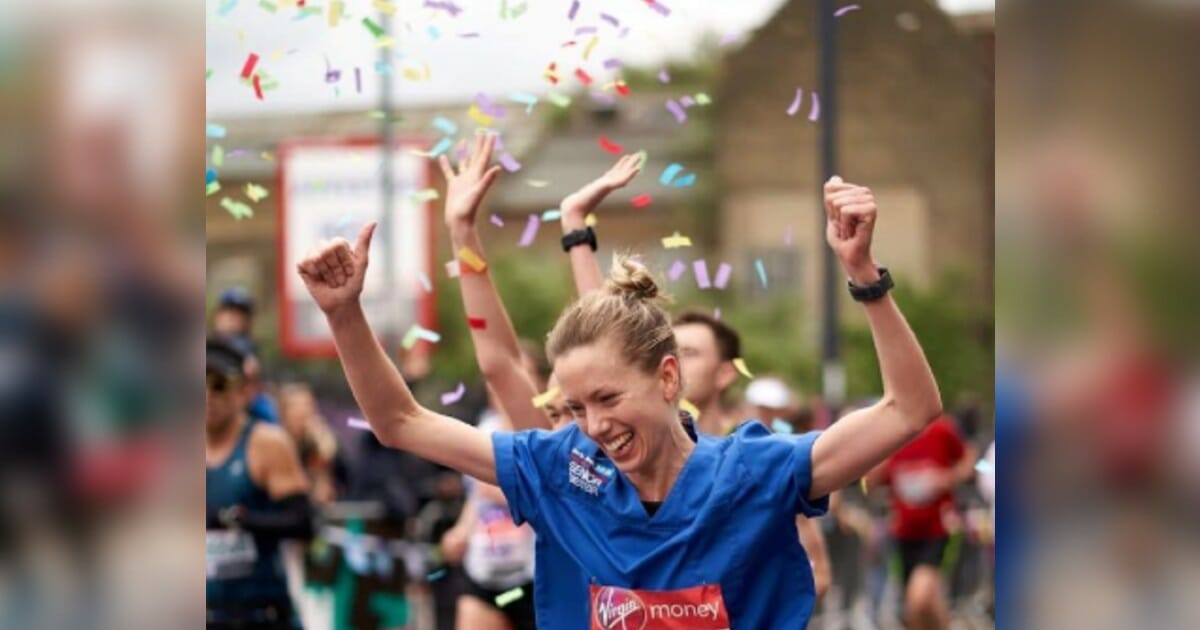 Running a marathon is a difficult feat in itself, but when Jessica Anderson signed up to compete in the 2019 London Marathon she wanted to challenge herself even more by going for a Guinness World Record. The record? Fastest marathon in a nurse’s uniform by a female runner.

When she crossed the finish line 32 seconds faster than the previous record, which was set in 2015, she was denied the title. Why? She wasn’t wearing a dress.

Anderson, who has been a nurse with the National Health Service for seven years, told Runner’s World that she first contacted Guinness World Record (GWR) back in February regarding her attempt for the London Marathon at the end of April, but was told she missed the deadline for costume submissions. She was also informed of what GWR considered to be a nurse’s uniform.

T – 2 days til London marathon … I’m attempting to beat the record for the fastest female marathon run in a nurse’s uniform. @mayob123 will be my wingman, coming along for the ride and to document the adventure ? I’m raising funds for @barts.charity so if you’d like to donate there’s a link in my bio. I’ve been overwhelmed by support from so many people and will be channelling all of that energy to keep me going on race day. Thank you ?? #bartscharity #londonmarathon #londonmarathon2019 #NHS #nurse #royallondonhospital #rundemcrew #crewlove #trackmafia™ #marathon #voltwomen #nevernotrunning

“I get that it’s supposed to be a fun thing but their definition is just so outdated,” she told Runner’s World. “Some of the nurses I work with do wear dresses but mostly we wear scrubs or a tunic and trousers. I’ve certainly never seen a male nurse wearing a dress to work.”

In order to qualify for the title, the runner had to wear “white or blue dress, pinafore apron and white cap.”

“I didn’t want to wear that, so I chose to wear my real uniform instead because the title of the record is ‘fastest marathon in a nurse’s uniform,’” she shared with The New York Times.

On the day of the race she showed up wearing blue scrubs, the uniform she wore every day.

Yesterday was incredible!! From having @mayob123 as the best pacer I could wish for, to crossing the line with the man of my dreams @leon_cerrone ❤️ and support from so many wonderful friends all along the way @vonski_ @clairebernwilson @sazzerf @makeitlooknice , lots of friends from @nhsbartshealth plus @daddydarkrdc and the one and only @run.dem.crew I couldn’t have asked for a better day ? Ps. @guinnessworldrecords this is what the fastest female marathon runner in a nurse’s uniform ACTUALLY looks like (3.08.22 ⏰) ?: @eric_tolentino #rundemcrew #crewlove #marathonislife #trackmafia™ #bartscharity #royallondonhospital #londonmarathon #nurse

But when she crossed the finish line, there was no pomp and circumstance from GWR. According to their guidelines, she did not run the marathon in a nurse’s uniform.

In reaction to the news, nurses from around the world shared photos of themselves using #WhatNursesWear. Not surprisingly, the nurses’ uniforms looked similar to Anderson’s.

Since Anderson’s record-breaking run and the resulting backlash, GWR said they will review the fastest marathon dressed as a nurse category and it will be made a priority.

“Guinness World Records takes the matters of equality and inclusiveness very seriously,” Samantha Fay, Senior Vice President, said in a statement. “I want to ensure all concerned that we have recognised the need for an immediate review of this attempt and the fastest marathon dressed as a nurse category and associated guidelines which we will begin as a priority. We are also committed to consistent reviews of all record categories to ensure they reflect the world we live in today.”

In just over a month I will be running the London marathon in full nursing uniform to raise funds for @barts.charity Guinness world records have declined my application as my uniform doesn’t meet their criteria of what a nurses uniform should be but I will still be aiming to beat the current official record time of 3hrs 8 minutes 54 seconds Training is going well so far but I expect the uniform to add undiscovered levels of chaffing on race day! If you would like to support me click on the link in my bio ? #londonmarathon2019 #bartshealth #vlm2019 #bartscharity #royallondonhospital #nhs #rundemcrew #marathontraining #nurse #nursing #trackmafia #marathonislife

In addition to attempting to set a world record, Anderson raised money to benefit the Barts Charity. At the time of publication she has raised over £4,500 ($5,900).

GWR’s guidelines for running a marathon in a nurse’s uniform are outdated and need to be revised to reflect modern times.

If you believe Jessica should be recognized for her accomplishment, pass this article on!