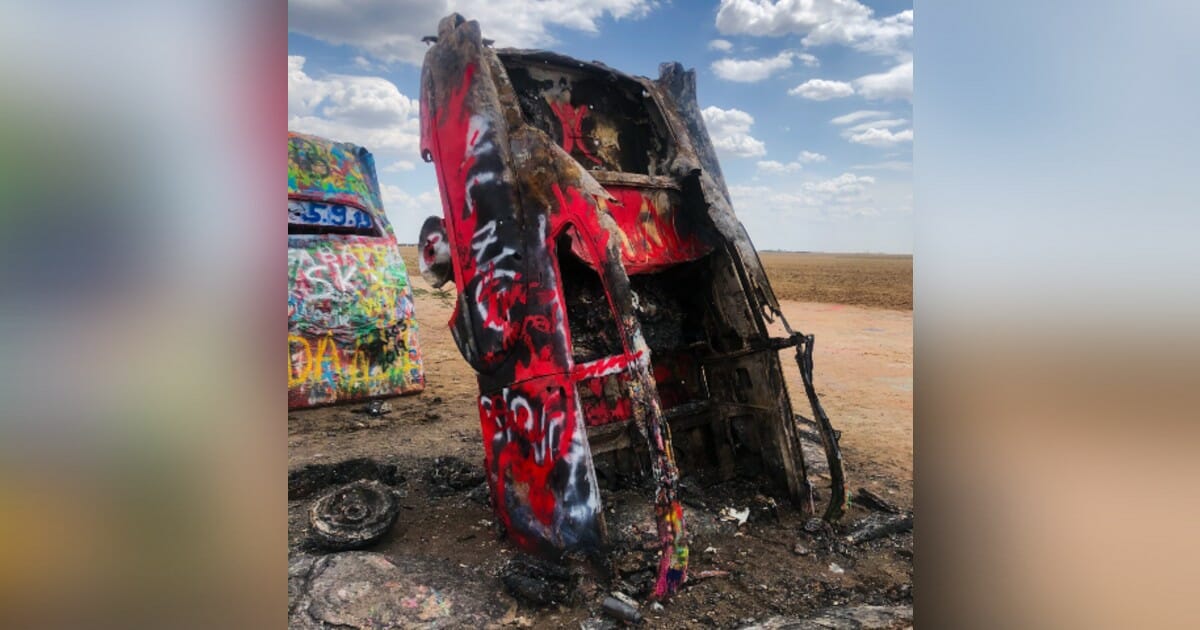 Cadillac Ranch is a popular art installation located along Interstate 40 in Amarillo, Texas. The 10 half-buried Cadillacs were installed in 1974 and have become a must-see for tourists and locals traveling through the Texas panhandle.

Visitors are highly encouraged to interact with the art display, but early Sunday morning something happened to one of the cars that forever changed the look of the installation.

Around 2:12 a.m. the Potter County Sheriff’s Office received a call about a fire at Cadillac Ranch. The fire department and the county’s public safety department responded to the scene.

KAMR reported that the fire was put out, but the damage was already done.

The oldest Cadillac – the Cadillacs are from 1949 to 1963) – was burned, though in a statement, Cadillac Ranch said the structural integrity of the car was not badly damaged.

“Though we’re heartbroken by this act of vandalism and the layers of history that were so carelessly destroyed, fortunately, the structural integrity of the Cadillac is still sound,” a statement said on Facebook. “When all is said and done, the Cadillac Ranch still stands as a testament to time, beauty, art, and history—despite the callous attempt to erase it.”

It may be a little muddy today but it's going to be a beautiful sunny day at the Cadillac Ranch!

According to reports, authorities are currently interested in speaking with anyone who has information regarding the fire. If it’s discovered that someone intentionally set the Cadillac on fire Cadillac Ranch said they plan on pressing charges.

I really hope someone didn’t intentionally set one of these cars on fire. Who could do such a thing?!