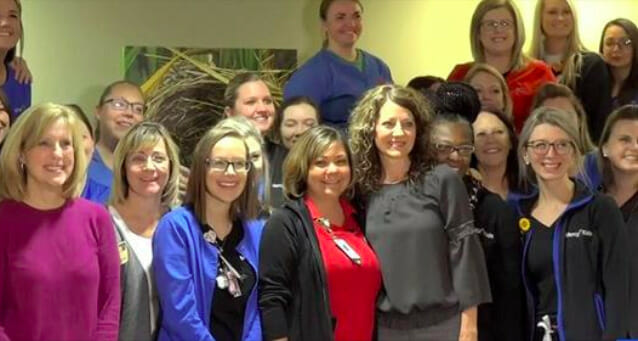 Who hasn’t dreamt of winning the lottery? What would you do if you won, say, $1.6 billion?

Many of us dream big — how many jet planes could that get me? Houses around the world? But others, it appears, think more along the lines of ‘how many people could I help?’

That’s what these nurses had in mind after recently winning a portion of a massive jackpot.

As the results were announced, the nurses thrillingly discovered they’d actually emerged as winners — not of the $1.6 billion jackpot, but of a healthy $10,000 sum.

“We never thought in a million years we would win anything at all and then we came one number away from winning $1.6 billion…” NICU nurse Stephanie Brinkman told KMOV News.

It’s at this point that the nurses faced the decision of what to do with the money. If split equally between each one of them, each nurse would end with approximately $50 in their pockets, after taxes and fees.

Realizing that one bulk sum of $10,000 was much more valuable, the nurses came up with a different idea…

What if they gave it to a colleague, who they considered family, the most in need?

And that’s what they agreed to do.

After brainstorming, the nurses knew what they had to do. They would split the $7,000 they had in their possession after taxes and fees between two of their most vulnerable members.

The first was neonatologist Casey Orellana.

Casey’s husband Phil was diagnosed with cancer earlier in the year and sadly, the prognosis wasn’t positive. Phil had not been able to work for months and was receiving various treatments for wound care. Meanwhile the family had discovered that the cancer had spread to his lungs.

Thanks to the nurses’ generous contribution, the Orellana family can now rest easy: the money will help pay for their mounting medical bills.

Gretchen Post experienced what no parent ever should — the death of a child. At just 17 years old, her son Jack sadly took his own life.

“My son on October 23, died by suicide,” Gretchen said. “Jack always had a smile on his face. He did not lead anyone on that this would happen.”

Gretchen will be using the graciously donated money to help pay for her son’s funeral, something she couldn’t be more grateful for.

Watch the news report below for more about these nurses’ wonderful act of kindness.

I can’t think of a smarter or kinder decision! Nurses already give so much through their work, day in and day out, yet in this instance, they still decided to help others rather than pocket the money for themselves. Share if you agree these nurses deserve all the praise in the world for their deed.