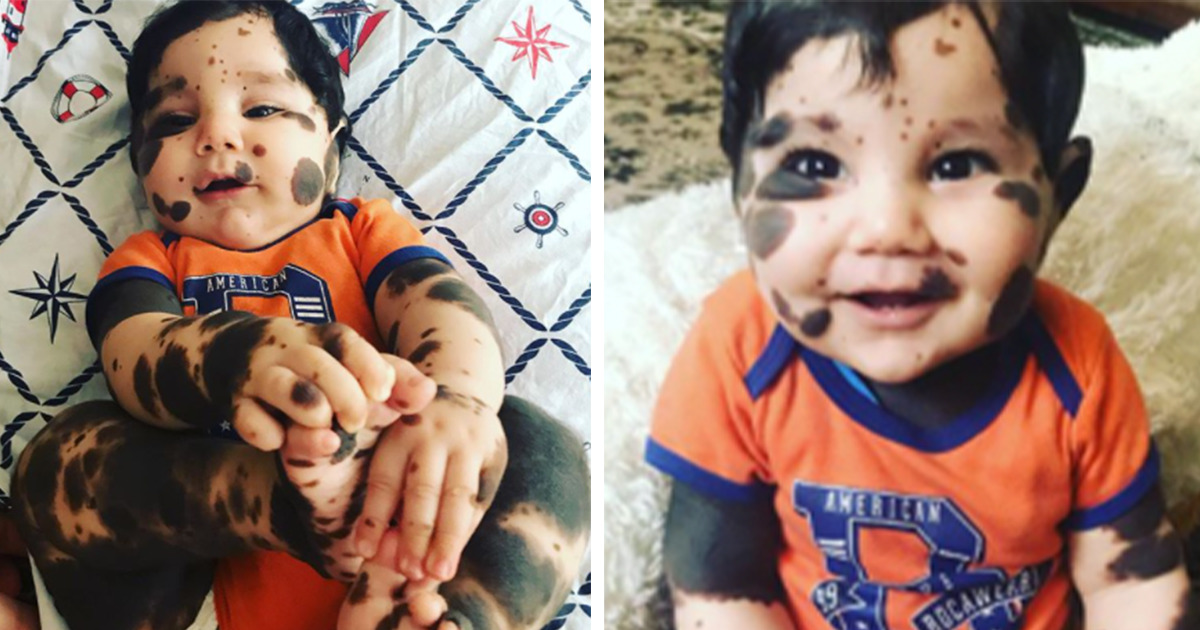 Which is why I can understand that the parents in this story were shocked when, after their baby’s birth, the doctors suggested that they could leave him at the hospital if they didn’t want him. Luckily, they didn’t listen.

Mariam Petrosyan, 26, and Taron Petrosyan, 28, are a couple from Yerevan, Armenia, that were happily expecting a baby boy. When little Artyom Petrosyan was born, though, they discovered that he had nevus birthmark – 80 percent of his body was covered in oval patches of raised, dark-coloured skin.

“We only found out about Artyom’s nevus birthmarks when he was born. I was completely shocked. (…) The doctors had never seen nevus marks like Artyom’s before,” Mariam told The Sun.

But that wasn’t all

After the initial shock, doctors then discovered that there was more. Artyom was also born with spina bifida.

“It was all such a blur. They took him away for a ninety-minute surgery to correct his spine and it took five days of recovery before we could properly see him again,” Mariam said.

They didn’t know how long Artyom would live

“I remember them sitting us down. Artyom hadn’t opened his eyes yet and they told us he might never open them due to the nevus birthmarks in that area,” said Mariam, continuing: “They also said they didn’t know how long he’d live (due to the highly increased risk of skin cancer).”

After delivering the sad news, a doctor went on to say something that left the couple horrified. They suggested to the new mom and dad that they could leave their baby at the hospital if they thought they were not going to be able to take care of him.

”(…) if we wanted to, we could refuse to bring him home because taking care of him would be too hard – we didn’t listen,” Mariam explained to The Sun.

Fortunately, Artyom has the best parents that give him all the care and love he needs and deserves. He has also two brothers, Narek, 3, and Artur, 2. The kids were obviously surprised when they saw her newborn brother, and asked their mom why Artyom “had chocolate dabbed on his face”.

“Most people are shocked when they see Artyom – some smile at him. Someone also told me he was a gift from God,” Artyom’s mom said.

Where the doctors saw horrible birthmarks, the children saw chocolate. We have so much to learn from little ones!

I happen to believe that every child born is a gift, and so is Artyom. I’m sending my prayers for him, hoping that he gets the long and happy life he deserves.

Share this article to join me in wishing all the very best for adorable baby Artyom.