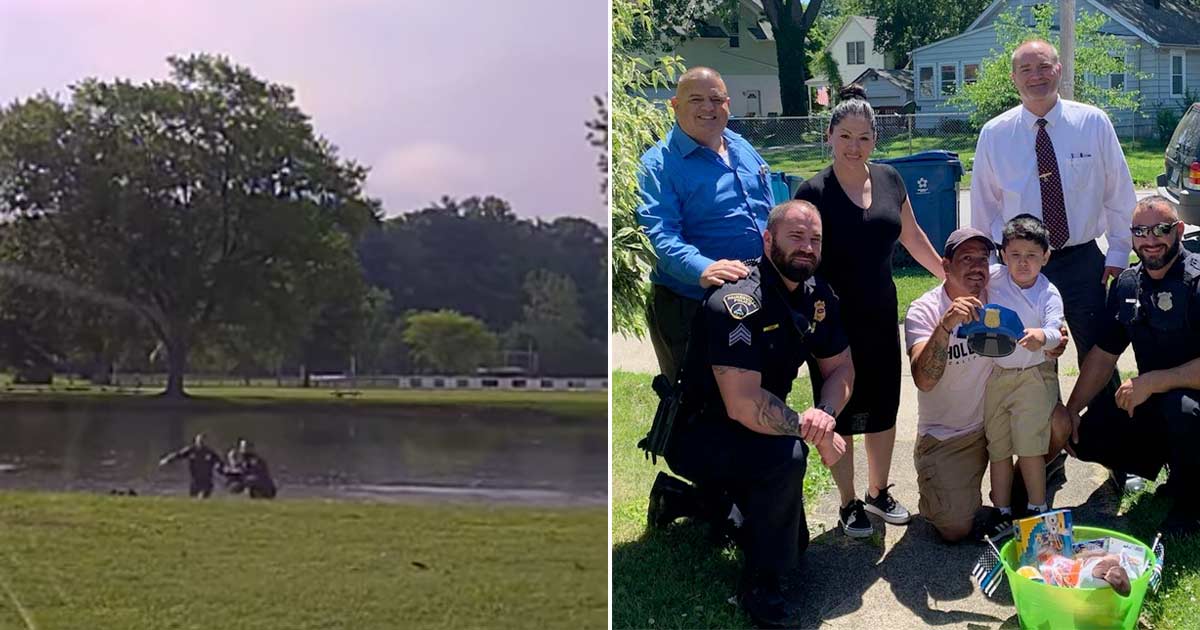 Parents will do anything to ensure their child is healthy, secure and happy. For that very reason, it’s also a parent’s worst nightmare when something happens to ther child.

The toddler, Paolo Moctezuma, was reported missing on June 12. Yet what could have been a fatal drowning accident was avoided thanks to three police officers who are now being hailed as heroes.

Officers Daniel Thompson, Matthew Tycast, and Chad Balausky were on duty on the morning of Saturday, June 12, when a child was reported missing from a home in Cleveland. The boy had reportedly been staying at a relative’s house.

The officers immediately began a search for 4-year-old Paolo Moctezuma. They then received a report of a body floating in the Recreation Park fishing pond.

The officers quickly headed to the pond, though the murkiness of the water made it difficult for them to see if anyone was indeed in there. Before long, though, they noticed air bubbles rising from the pond.

The “silhouette of a small person”

As per Cleveland19, they then spotted the “silhouette of a small person” about 20-feet from the pond’s bank. The officers knew they had to act fast – so Officers Tycast and Thompson removed their gun belts and rushed into the water to try to save the boy. Officer Balausky, meanwhile, ran to get a rope to assist them.

One of the cruiser dashcams showed the whole scene unfold.

The boy had swallowed a lot of water, and so Officer Thompson quickly began chest compressions.

“After a number of chest compressions, they had a cough and things started to expel, water started to expel out of the child’s mouth,” said Police Chief Dan Waterman, according to The Epoch Times.

Painsville Fire Department soon arrived at the scene to provide the little boy with further medical treatment. Paolo was then taken to Tri Pont Medical Center in Concord.

Thankfully, he has made a full recovery.

“They responded quickly, they worked excellently, made excellent decisions under pressure and they didn’t hesitate for a moment to risk their own lives to save that child,” said Chief Waterman of his officers.

Paolo’s parents, Jose and Anna, were very emotional while speaking to the officers and thanked them and the medics who saved their son’s life.

Went out through a sliding door

According to police, Paolo was with relatives while his parents were working. It’s believed he left the family member’s home through a sliding door.

After the accident, Painesville Police Department announced the boy had fully recovered thanks to the heroic officers.

“The child, Paolo Moctezuma, has made a full recovery from the near drowning and was released from Cleveland’s MetroHealth Medical Center on Tuesday, June 15,” the post stated.

”Without the 9-1-1 callers and the responding officers’ quick responses, this near tragedy would have a much different outcome.”

These heroic police officers not only saved the boy’s life, but when Paolo had returned home from the hospital, Officers Thompson and Tycast visited him to present him with a basket full of toys and police memorabilia as a welcome home gift.

Painesville police also took the opportunity to remind the public of the importance of speaking with young children about water safety.

In the video below you can watch the rescue. Note: Some viewers may find the video difficult to watch.

We are very happy to hear that Paolo is fine and we want to thank these police officers for their heroism. Without them, this could have had a completely different outcome.

Don’t forget to talk to your children about water safety. In a matter of seconds everything can change drastically. Please, share this article to remind your loved ones about this, and leave a comment in the box on Facebook to thank the police.