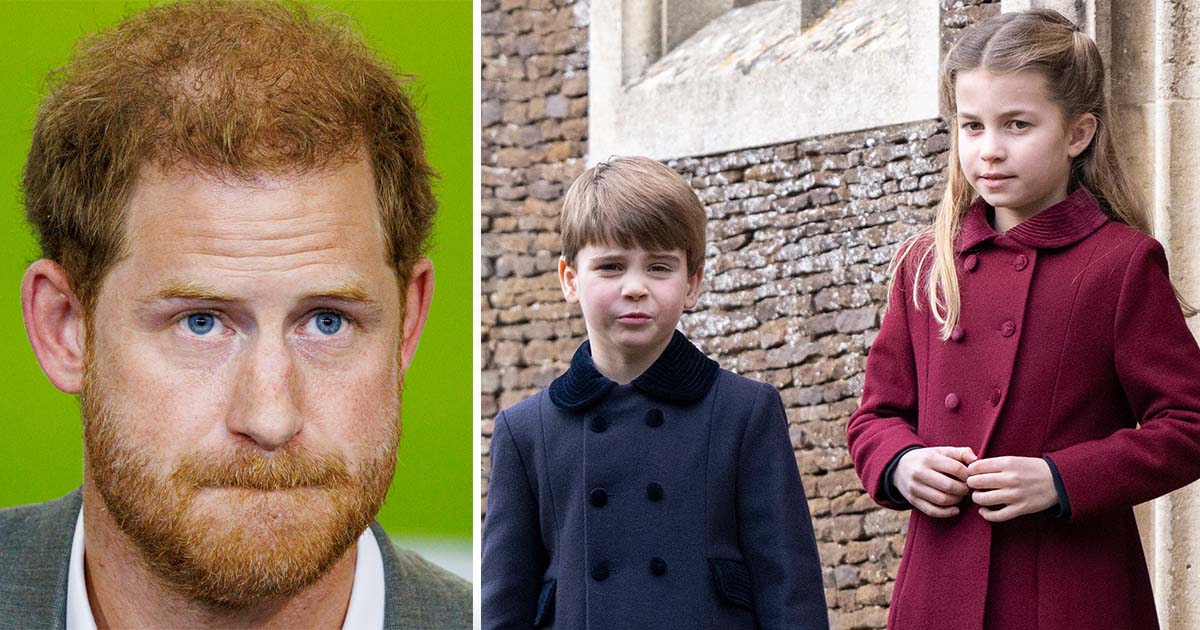 When Prince Harry and Meghan Markle decided to leave the Royal Family, they expressed a desire for more freedom and the chance to give their children a life with more alternatives than if they’d grown up as royals.

In his tell-all memoir, Spare, Harry shared his thoughts on his own upbringing in the royal sphere, a life that, clearly, wasn’t for him in the end.

In his book, Harry mentioned how he believed that, as the book’s title confers, he was the “spare” member in his family. He even claims he knew he was born in case his big brother William needed blood or an organ donation.

As the second-born, Harry was obviously behind William in the line of succession, just as William and Kate’s daughter, Princess Charlotte, and youngest son, Prince Louis, are. In an interview with The Telegraph, Harry now says he’s concerned that the two siblings will “end up” just like him.

The reaction to Harry’s book Spare has been visceral. No matter what readers think, it has definitely put the Prince in the spotlight once again. He was said to have gotten $20 million for the book contract alone, but despite the hefty figure, his publisher Penguin Random House are set to make far more.

According to Harry’s publisher, Spare is on its way to setting new records. The book sold 400,000 copies on the first day across physical, e-book, and audio formats.

On the UK Amazon site, Harry’s memoir is already the top-selling publication. It’s now expected to be the biggest seller of 2023.

Parts of the book were widely leaked before its release, but its contents have continued to fill airtime and pages both in traditional newspapers and online.

On its website, Guinness World Records have announced that Harry’s tell-all book has become the fastest-selling non-fiction book of all time.

Harry demands an apology from his family

The official number of its first day of sales in the UK, US, and Canada was 1.43 million copies. That meant that Harry surpassed the record held by Barack Obama’s fourth book, A Promised Land, which sold 887,000 copies on its release day.

Even though the book has been an enormous success, it might have been at a high price for Harry. Reports state that his family – whose relationship with Harry has been greatly damaged over recent years – have decided not to comment on the book.

Both Prince William and King Charles have reportedly chosen not to read Spare. However, they most likely have gotten all information they need from their aides.

King Charles will officially be crowned as Britain’s new monarch in just four months. The historic event will take place on May 6 – the date that also happens to be Harry and Meghan’s son Archie’s birthday – in Westminster Abbey. Needless to say, it’s going to be a grand affair, but whether or not the Sussexes will be invited remains unclear.

In an interview with the Telegraph, Harry made it clear that he’s demanding an apology from his family.

He also accused them of treating him as if he was “delusional and paranoid.”

“He’s never wrong about anything”

When asked if he’d attend the coronation, Harry said: “There is a lot that can happen between now and then. But, you know, the door is always open. The ball is in their court.”

He added: “There’s a lot to be discussed, and I really hope that they are willing to sit down and talk about it.”

Only time will tell if Harry and Meghan will attend King Charles’ coronation. Yet even if the Prince is invited, royal historian Hugo Vickers, a friend of the royals, predicts that he won’t accept the invitation.

“Harry has made it clear that he has certain conditions before he will accept any invitation,” he told Page Six.

“It is always possible to reconcile if both parties are willing to do so. But I don’t think the Harry side will budge.”

Vickers added: “He’s never wrong about anything. so that’s not a very good start … I do hope Harry won’t come, as it could deflect from the ceremony. After all, that’s why they don’t invite crowned Kings and Queens to a coronation.”

After Prince Philip’s funeral in 2021, Harry met with William and Charles to try and make amends. But, unfortunately, it wasn’t successful, with Harry revealing in his book that it was like “going into battle.”

As things stand, a royal source told the Times that another reconciliation meeting might take place soon.

Relationship expert says Harry and the royals can make amends

If so, it needs to take place before Charles’s coronation.

“It’s going to take flexibility on all sides, but it can be done, it’s fixable,” the source said. “It needs Harry over here, in the room with the King and [Prince Williams], a couple of other family members, some of ‘his people’ he trusts who always had his back, so he doesn’t think he’s being ambushed. Someone like Elf [Ed Lane Fox, Harry’s former private secretary] and Christopher [Lord Geidt, the late Queen’s former private secretary who advised the Sussexes].”

So what could Harry and his family possibly do to try and mend the relationship? According to some, that ship has already sailed, though others argue it remains possible. No matter what, relationship expert Valon Asani explained to the Daily Express that both parties need to acknowledge each other’s struggles.

“The trauma that Prince Harry has recounted and shared with the world recently can manifest itself in many ways, and Prince Harry likely has feelings of abandonment from his family and is seeking some form of compassion and communication from them,” Asani said.

As the coronation is a “meaningful and happy occasion,” Asani argued that it is the perfect time to make amends.

“The occasion of the coronation is cause for celebration as we celebrate the beginning of the King’s reign, and such a meaningful and happy occasion may be the perfect backdrop for reconciliation.”

As stated, Harry’s book revealed many things about his life within the Firm, including details about his upbringing, and a deal of criticism aimed at his family members.

However, one royal expert has criticized Harry for bringing up his youngest nephew, Prince George, in the book. Harry claimed that he wasn’t invited to William and Kate’s house to spent time with Prince George after his birth.

But it did not end there. Moreover, he revealed that Princess Charlotte had broken down in tears prior to Meghan’s wedding. A number of critics argued that in doing so, Harry violated his niece Charlotte’s privacy.

In an interview with The Telegraph to promote his book, Harry once again opted to talk about William and Kate’s three children.

He admitted that he genuinely fears that his niece and nephew – Princess Charlotte and Prince Luis – will ultimately “end up” just like him.

“Though William and I have talked about it once or twice, and he has made it very clear to me that his kids are not my responsibility, I still feel a responsibility knowing that out of those three children, at least one will end up like me, the spare,” Harry said.

“And that hurts, that worries me.”

Harry continued: “I was brought into the world in case something happened to Willy, I was summoned to provide backup, distraction, diversion and, if necessary, a spare part. Kidney, perhaps. Blood transfusion. Speck of bone marrow. This was all made explicitly clear to me from the start of life’s journey and regularly reinforced thereafter.”

“It is none of Harry’s business”

As per the line of succession, Prince William will ascend the throne after King Charles, with Kate Middleton then becoming Queen Consort. After William, the crown will pass to Prince George, though if something should happen to him, his siblings, Princess Charlotte and Prince Louis, are next in line.

Spare marks the first time Harry has spoken so freely about William and Kate’s children. After his comments, royal author Ingrid Seward warned him against further discussing them.

“Harry should lay off Prince William’s children. In fact, he should lay off everybody and button it now,” she told The Sun. “It is a very dangerous road to go down, to start talking about other people’s children.”

She added: “And what he says Prince William said to him is absolutely right – they are William’s responsibility and not his, so he should keep out of it.

“It is none of Harry’s business. But Harry has become dangerous to his family, and to himself, because he can lob in his little asides whenever he wants.”

Harry’s book has now been out for almost two weeks. As mentioned, it has garnered both positive and negative reactions, though the Royal Family have chosen not to respond.

Of course, that doesn’t mean relatives of the royals have been quiet. Kate Middleton’s uncle Gary Goldsmith, chose to vent his frustrations at Harry publicly.

In a piece for the Daily Mail, Goldsmith said that Harry is deluded if he believes his memoir will bring him reconciliation with the royals.

Moreover, he reacted strongly to the Prince sharing private things about the young children.

“Four days before his wedding, he writes, Meghan received a text from Kate saying Charlotte’s dress, hand-sewn from measurements, was too big and needed altering. In the book, he reports, Kate said Charlotte cried when she tried on the ‘baggy’ dress,” Goldsmith wrote.

“This made me see red. How dare Harry share such a confidence involving a young child? How he has the temerity to talk about moving to the US to ‘protect his family and their privacy’ when he is prepared to violate his niece’s confidentiality is base hypocrisy.”

He added: “And I’m particularly appalled by his vile confection of half-truths and complete fabrications because Kate is my adored niece.”

“Few people have bought into Harry’s fractious and peevish book — and, in writing it, I’m afraid he has overstepped the line. Will his family ever forgive him? I doubt it.”