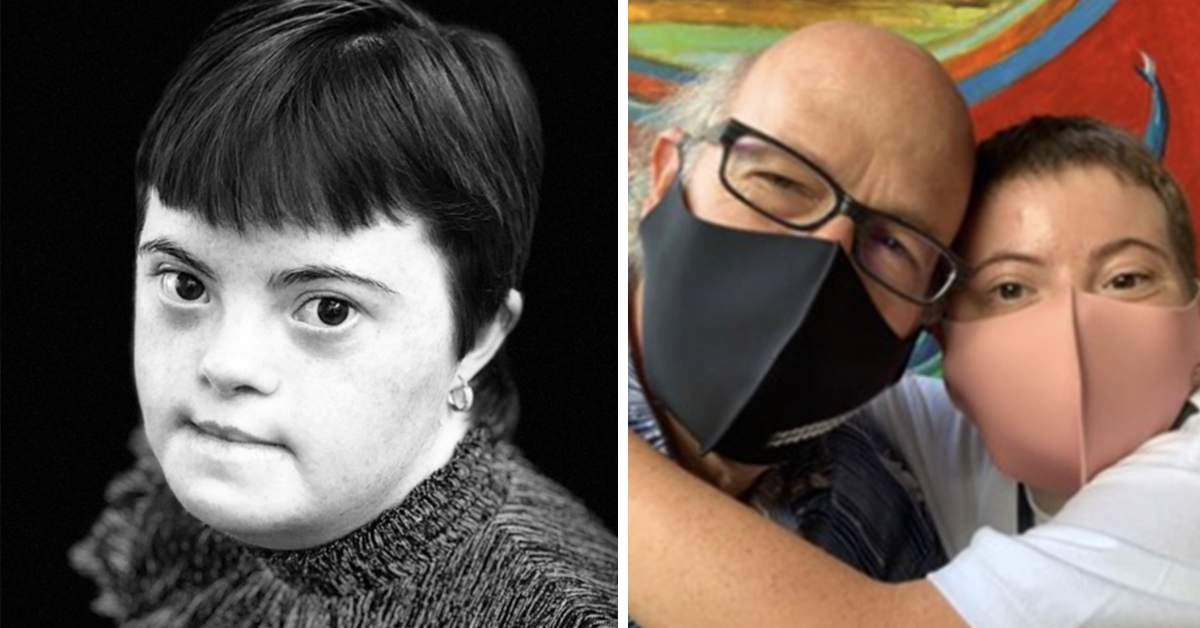 Graduating from college takes hard work, dedication, and determination, it’s not for everyone. But for many people the option has been taken away from them before they’ve had a chance to choose that path.

This could be due to financial constraints or in some cases a disability.

But for one fierce dad he wasn’t going to let his daughter’s disability stop her from achieving her dream and graduating from college.

Jay Handlin’s daughter Rachel has Down syndrome – when a child is born with an extra copy of their 21st chromosome which causes physical and mental development delays – it affects one in every 700 babies in the U.S.

Despite all the odds the very talented 24-year-old graduated from the California Institute of Arts with a Bachelor of Fine Arts degree.

Making it through the world of academia is a challenge for those who are born different; the obstacles are bigger, especially when it comes to other people’s perceptions of what can be achieved when you’re different.

But for Jay Handlin none of this mattered, his daughter had been passionate about art from a very young age and wanted to study fine arts at college.

Rachel’s supportive parents noticed her strong reaction to art when Rachel was lucky enough to visit one of the greatest art museums in the world.

“The first time we took her to Musée d’Orsay, Laura was carrying Rachel when we entered the Van Gogh gallery and it was like an electric charge went through Rachel’s body. She had an instant, strong, positive physical reaction to the art,” dad Jay told PEOPLE.

It was this passion that her parents nurtured throughout her life.

When Rachel was in ninth grade she was given a Nikon Coolpix point-and-shoot digital camera for her birthday and was able to practice her passion for photography moving on to take photography classes in high school to build up her portfolio for college.

“It was clear to us that there was something unique about Rachel’s point of view,” Jay says of his daughter’s photos. “The images were really striking. These were not the kinds of photos most people would take.”

When she graduated from high school she enrolled in CalArts and became the first student with Down syndrome to attend the university.

She lived in an apartment off campus with her mom so she could focus on her studies without the distractions of independent living, and with her determination and hard work, coupled with the unwavering support from her parents, she graduated.

When Rachel achieved her dream her dad Jay wanted to tell the world how proud he was of his daughter.

Posting his daughter’s photo to Twitter, the 61-year-old dad wrote: “This is my daughter, Rachel Handlin. Tonight, she earned her full Bachelor of Fine Arts degree in Photography & Media from the prestigious California Institute of the Arts, @CalArts ⁩. Rachel has #Downsyndrome. I am officially the proudest father on the planet. Fight me.”

His tweet went viral as many were quick to congratulate his daughter and share similar anecdotes about their loved ones with Down syndrome.

“This is a very rough, ballpark calculation, but out of all the people with Down syndrome in the world, those who’ve earned a regular college degree are literally about one in a million,” Jay told PEOPLE.

“That’s not because they’re the only ones who could do it. They’re the ones whose families refused to let their children’s futures be denied, who fought unfair odds, social biases, low expectations and systems stacked against them, and somehow managed to win.”

Rachel has some great things ahead of her, and showcases her talent on her Instagram page where she recently announced she was showing her first short film at an online film festival.

Her parents hope Rachel will not only be an inspiration to other people with Down syndrome but also help parents to understand this isn’t the barrier they might think it is.

“That, given the opportunities, they can and will accomplish extraordinary things,” Jay adds. “That they deserve to be full-blown members of our society, with careers, and families, and everything else that everybody else deserves and gets.”

Both Rachel and her parents deserve all the praise. I couldn’t be happier for this talented young woman and can’t wait to see what she does next. Rachel you are a true inspiration!