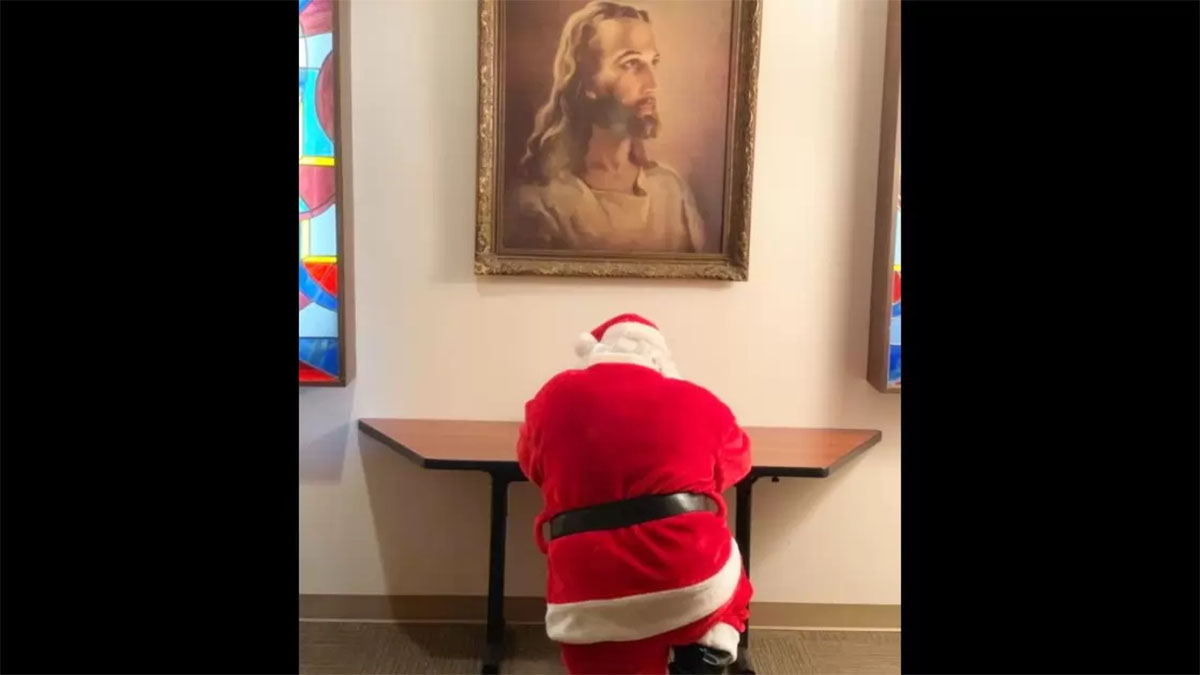 This time of year we all spend far too much time rushing around many of us forget the reason for this season.

Christmas is a time of giving but we can often get lost in all the present buying and not have time to stop and really enjoy this wonderful time of year.

For children it’s a magical time of year when Santa Claus brings all the joy to those who believe in him.

In the run up to Christmas we can see many “real-life” Santa Clauses in malls and stores across the country with lines of children in tow ready to let them know their Christmas wishes.

One real life Santa had just visited children at a hospital in Texas when he took a moment to visit the chapel and was captured on camera.

Mariana Whitley Tumlinson captured the compassionate Santa while she was at work one day on camera and had to share the beautiful moment.

Wanted to go inside and pray

Santa didn’t realize anyone was watching him and was taking a peaceful moment to pray for the children he had just visited in hospital.

The hospital had asked Santa to bring some festive cheer to the children who would be spending Christmas in hospital. After he had spent time with the kids he asked if he could use the hospital’s chapel for a quiet moment.

According to Mariana, he wanted to go inside and pray for the children he’d just spent time with.

Mariana showed him the way to the chapel and then left him alone for his private moment with God. It was only when she returned a short time later that she returned and witnessed a scene that she had to share.

Santa was on one knee in the chapel, with his head bowed down in prayer in front of a portrait of Jesus Christ.

“I keep getting choked up with this photo,” Mariana wrote on her Facebook page.

“Today, after Santa visited our patients and was on his way out, he noticed our Chapel. He asked if he could go in and pray for the kids he just visited. I, of course, said yes.

“I didn’t walk in with him right away but when I did I was so moved by this image I had to capture it. What a great reminder of the reason for the season.”

Her image went viral with more than 40,000 people reacting to the beautiful scene and sharing the image.

Thousands commented on the image with one user writing: “God is with us all in his special way

,” while another said: “Awesome picture, the true meaning of Christmas!”

We all need this reminder right now, it’s been a tough year for us all and this image does help to restore our faith.

Please share with all the people who you think needs to see this today.