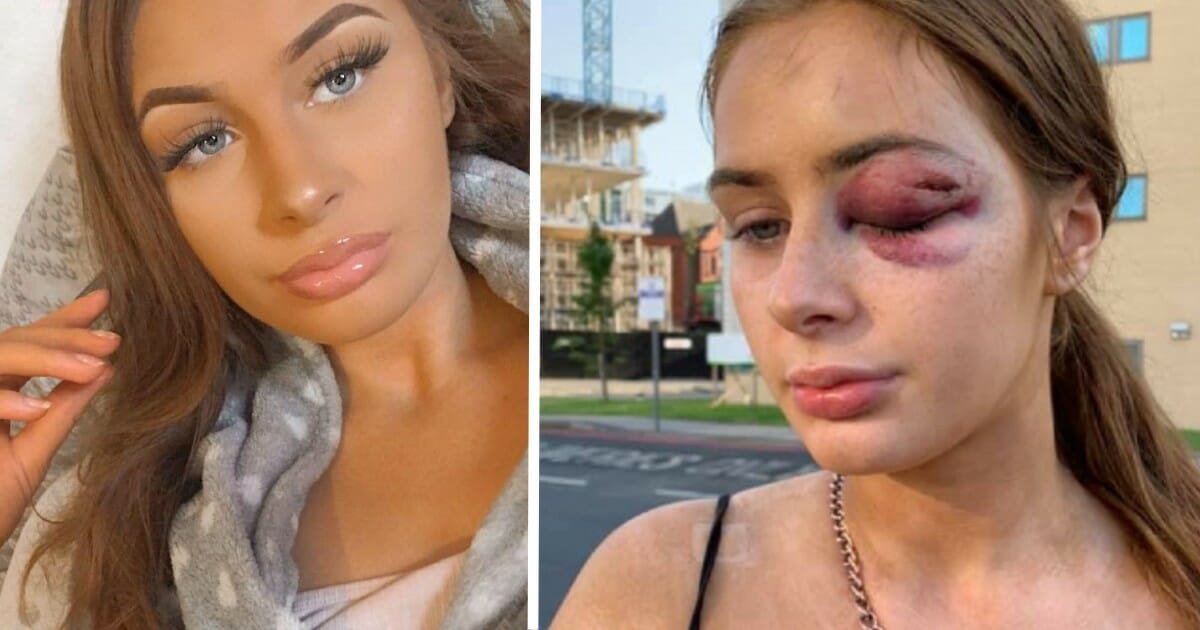 A teenager was reportedly beaten until she was unconscious after she and a friend left a club in Manchester, England this weekend.

The 18-year-old, Gabrielle Walsh, told Manchester Evening News that she informed the suspect she wasn’t interested, and the next thing she knew she was on the ground.

On July 13, Gabrielle and her friend, Kyle McKeown, had just left a club in the Gay Village in Manchester around 3:30 a.m. when three men approached them.

One of them men made a comment about Gabrielle’s feet, “I like your feet,” to which the 18-year-old said, “okay.”

The pair attempted to walk away from the suspects.

Gabrielle and Kyle continued walking away, but the group of men continued to follow them and attempted to start a conversation.

“Eventually, I turned around and said ‘I’m sorry, I’m not interested,”” she said.

One of the men, whom Gabrielle described as being in his 20s, asked if she was with her friend Kyle.

“Who are you with, specky four eyes?”

The group continued to harass Gabrielle and Kyle.

Then the situation escalated. One of the members in the group, who was described as being “5’8/9 with black hair and tanned skin” and wearing a pink t-shirt, punched Gabrielle in the face. The trio also attacked Kyle.

“He fully knocked me out,” Gabrielle said. “When I woke up I was on the floor and the three of them had jumped on Kyle as well.”

Gabrielle’s friend shared images of her injuries on Facebook.

A community safety group helped them after the attack.

The Village Angels, an LGBT community safety group, administered first aid Gabrielle and Kyle and offered to call an ambulance, but when they learned it would be a two hour wait Gabrielle took a taxi to the hospital.

“They didn’t do much, they basically just gave me some eye drops and told me to go home,” Gabrielle said.

She returned to the hospital and was told she had a blood clot in her eye. When she opens her eye all she sees is “yellow.”

Following the horrific attack, the police were notified and an investigation was opened. According to Manchester Evening News, someone who witnessed the attack has come forward, though Gabrielle is hoping that police are also able to obtain CCTV footage of the attack.

“I’m not a rude person, I just said ‘sorry I’m not interested'”she said. “I think it was a jealousy, ego thing because I rejected him in front of his friends. Girls feel like they can’t say ‘no.’ They feel like if they say ‘no’ then they might hurt you and in this case it was true.”

“This was a violent and unprovoked attack upon a young woman who was simply minding her own business during a night out,” Chief Inspector Cherie Buttle of GMP’s City Centre Division said. “We are determined to find those responsible for this cowardly assault and would appeal to anyone who has information to come forward as soon as possible.”

I have no words for this. Absolutely no one should feel like they can’t say “no” in fear of what might happen.